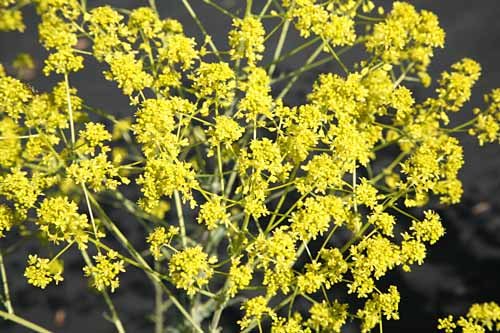 Woad, Isatis tinctoria is a BIENNIAL/PERENNIAL growing to 1 m (3ft 3in) by 0.5 m (1ft 8in).
It is hardy to zone 7 and is not frost tender. It is in flower from Jun to August, and the seeds ripen from Aug to September. The flowers are hermaphrodite (have both male and female organs) and are pollinated by Insects.

Suitable for: light (sandy), medium (loamy) and heavy (clay) soils and prefers well-drained soil. Suitable pH: acid, neutral and basic (alkaline) soils and can grow in very alkaline soils.
It can grow in semi-shade (light woodland) or no shade. It prefers moist soil.

An easily grown plant, it prefers a well-drained fertile soil in a sunny position, though it succeeds in ordinary garden soil. Prefers neutral to alkaline conditions. Plants deplete the soil of nutrients and cannot be grown successfully on the same site for more than two years. Plants are hardy to about -15°c. Woad is a biennial, or occasionally a short-lived perennial plant. It has a very long history as a dye plant, being used by the ancient Britons to give a blue colouring to the skin. At one time woad was widely cultivated for this blue dye obtained from its leaves but with the advent of chemical dyes it has fallen into virtual disuse. It is currently (1993) being grown commercially on a small scale in Germany as a wood preservative. Plants self-sow freely when they are grown in a suitable position, though they tend not to thrive if grown in the same position for more than two years.

Seed – sow spring in situ. Fresh seed can also be sown in situ in late summer, it will take 20 months to flower but will produce more leaves

The leaves are harvested when fully grown and 3 – 4 harvests can be made in total.

Leaves – they require long soaking in order to remove a bitterness, and even then they are still bitter. There is no record of the seeds being edible, but they contain 12 – 34% protein and 12 – 38% fat on a zero moisture basis.

Woad has rather a mixed press for its medicinal virtues. One author says it is so astringent that it is not fit to be used internally – it is only used externally as a plaster applied to the region of the spleen and as an ointment for ulcers, inflammation and to staunch bleeding. However, it is widely used internally in Chinese herbal medicine where high doses are often employed in order to maintain high levels of active ingredients. The leaves are antibacterial, anticancer, antiviral, astringent and febrifuge. It controls a wide range of pathogenic organisms, including viruses. It is used internally in the treatment of a wide range of disorders, including meningitis, encephalitis, mumps, influenza, erysipelas, heat rash etc. The leaves are harvested in the summer and can be used fresh or dried. They are also macerated and the blue pigment extracted. This is also used medicinally, particularly in the treatment of high fevers and convulsions in children, coughing of blood and as a detoxifier in infections such as mumps. The root is antibacterial and anticancer. It is used in the treatment of fevers, pyogenic inflammation in influenza and meningitis, macula in acute infectious diseases, erysipelas, mumps and epidemic parotitis. Its antibacterial action is effective against Bacillus subtilis, haemolytic streptococcus,, C. diphtheriae, E. coli, Bacillus typhi, B. paratyphi, Shigella dysenteriae, S. flexneri and Salmonella enteritidis. Both the leaves and the roots are used in the treatment of pneumonia. The root and the whole plant have anticancer properties whilst extracts of the plant have shown bactericidal properties

Other uses of Woad:

Woad is historically famous as a dye plant, having been used as a body paint by the ancient Britons prior to the invasion of the Romans. A blue dye is obtained from the leaves by a complex process that involves fermenting the leaves and produces a foul stench. The dye is rarely used nowadays, having been replaced first by the tropical Indigofera tinctoria and more recently by synthetic substitutes. Nevertheless, it is a very good quality dye that still finds some use amongst artists etc who want to work with natural dyes. A very good quality green is obtained by mixing it with Dyer’s greenwood (Genista tinctoria). Woad is also used to improve the colour and quality of indigo, as well as to form a base for black dyes. Is now grown as a green wood preservative in Germany.

Woad belongs to Mars and Jupiter. The ancient Celts and Picts cut (tattoo) magickal designs into their bodies and rubbed in the blue coloring. You may simply prefer to paint it on for ceremonial purposes. Woad is also supposed to aid in shape-shifting and the study of past lives during magic rituals.

The active principle, Scopnarine, is found as starry, yellow crystals, and is soluble in boiling water and in alcohol. From the liquid which remains another principle, Spartéine, is extracted, an organic base, liquid and volatile, with strong narcotic properties.

This herb is only to be used by a qualified practitioner as it is classified as being a poisonous substance please view this article as being for information only.