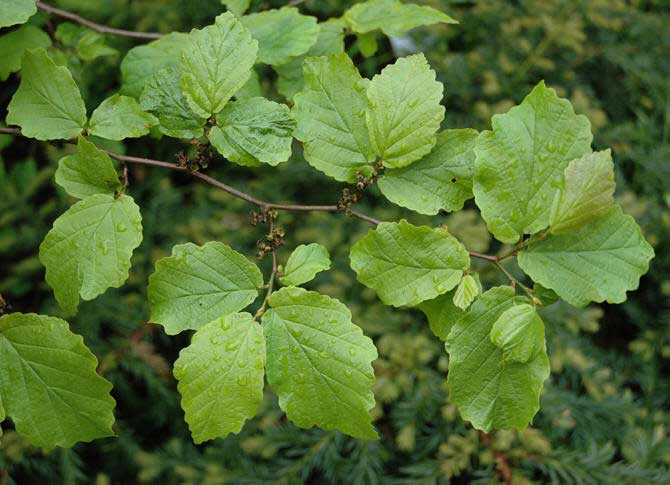 Habitat: Indigenous to N. America and Canada. Edges of dry or moist woods, in rich soil and on the rocky banks of streams. The best specimens are found in deep rich soils.

Avoid long-term use due to cancer risk (from high tannin content). Avoid during pregnancy and breastfeeding. 1 g ingested can cause vomiting, nausea, impaction. Topical use may cause dermatitis.

Witch hazel bark is a traditional medicinal herb of the North American Indians who used it to heal wounds, treat tumours, eye problems etc. A very astringent herb, it is commonly used in the West and Witch Hazel products are widely available from both herbalists and chemists. It is an important ingredient of proprietary eye drops, skin creams, ointments and skin tonics. It is widely used as an external application to bruises, sore muscles, varicose veins, haemorrhoids, sore nipples, inflammations etc. The bark is astringent, haemostatic, sedative and tonic. Tannins in the bark are believed to be responsible for its astringent and haemostatic properties. Bottled witch hazel water is a steam distillate that does not contain the tannins from the shrub, this is less effective in its action than a tincture. The bark is used internally in the treatment of diarrhoea, colitis, dysentery, haemorrhoids, vaginal discharge, excessive menstruation, internal bleeding and prolapsed organs. Branches and twigs are harvested for the bark in the spring. An infusion of the leaves is used to reduce inflammations, treat piles, internal haemorrhages and eye inflammations. The leaves are harvested in the summer and can be dried for later use. A homeopathic remedy is made from fresh bark. It is used in the treatment of nosebleeds, piles and varicose veins.

Hamamelis virginiana,Witch Hazel, is a deciduous Shrub growing to 5 m (16ft) by 5 m (16ft) at a slow rate.
It is hardy to zone 5. It is in flower from Sep to November, and the seeds ripen from Aug to September. The flowers are hermaphrodite (have both male and female organs)

Prefers a moist sandy loam in a sunny position, though it tolerates some shade. Prefers a rich well-drained soil. Dislikes dry limy soils but will succeed in a calcareous soil if it is moist. Prefers a position sheltered from cold drying winds in a neutral to slightly acid soil. A very hardy plant tolerating temperatures down to about -35°c. Plants seldom produce seeds in Britain. Witch hazel is a widely used medicinal herb. The bark is harvested commercially from the wild in N. America. The twigs have been used in the past as dowsing rods for water divining. A slow growing shrub, it takes about 6 years to flower from seed. The flowers have a soft sweet perfume. This species is notably susceptible to honey fungus.

Seed – this can be very slow to germinate. It is best to harvest the seed ‘green’ (as soon as it is mature but before it has dried on the plant) around the end of August and sow it immediately in a cold frame. It may still take 18 months to germinate but will normally be quicker than stored seed which will require 2 months warm stratification then 1 month cold followed by another 2 weeks warm and then a further 4 months cold stratification. Scarification may also improve germination of stored seed. Prick out the seedlings into individual pots as soon as they are large enough to handle. Overwinter them in a greenhouse for their first winter and plant out in late spring. Layering in early spring or autumn. Takes 12 months. Good percentage. Softwood cuttings, summer in a frame.

Collection: The leaves can be gathered throughout the summer and dried quickly to ensure that they do not become discoloured. The bark is gathered in the spring after sprouting.

Seed – raw or cooked. An oily texture. The seeds are about the size of a barley grain and have a thick bony coat. The reports of edibility must be treated with some suspicion, they all seem to stem from one questionable report in the ‘Medical Flora’ of Refinesque. A refreshing tea is made from the leaves and twigs.

Indications: This herb can be found in most households in the form of distilled Witch Hazel. It is the most applicable and easy to use astringent for common usage. As with all astringents, this herb may be used wherever there has been bleeding, both internally or externally. It is especially useful in the easing of haemorrhoids. It has a deserved reputation in the treatment of bruises and inflamed swellings, also with varicose veins. Witch Hazel will control diarrhoea and aid in the easing of dysentary.

Combinations: For the easing of haemorrhoids it will combine well with Pilewort.

Infusion: pour a cup of boiling water onto 1 teaspoonful of the dried leaves and let infuse for 10-15 minutes. This should be drunk three times a day.

Ointment: Witch Hazel can be made into an excellent ointment.

Other uses of Witch Hazel:

Magickal uses include chastity and protection. Carry to ease grief over a lost love. Use in a sachet to reduce passions. Use in love spells and spells to ward off evil.