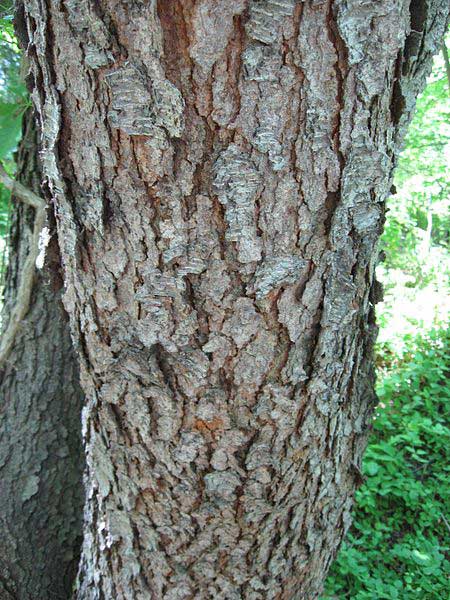 Habitat: Widely distributed throughout Canada and the USA. Found in a variety of soils, preferring moist fertile conditions on north or east facing slopes or protected coves. Dry woods.

Wild Cherry Bark side effects: the seeds and leaves of this species contain high quantities of hydrogen cyanide, a poison that gives almonds their

characteristic flavour. This toxin is readily detected by its bitter taste. Usually present in too small a quantity to do any harm, any very bitter seed or fruit should not be eaten. In small quantities, hydrogen cyanide has been shown to stimulate respiration and improve digestion, it is also claimed to be of benefit in the treatment of cancer. In excess, however, it can cause respiratory failure and even death. Discard the seeds. Keep plant way from children.

Wild Cherry Bark was widely employed as a medicinal herb by various native North American Indian tribes who used it to treat a variety of complaints. It is little, if at all, used in modern herbalism. The bark of the root, trunk and branches is antitussive, astringent, pectoral, sedative, stomachic, tonic. The medicinal properties of this plant are destroyed by boiling, so the plant should only be allowed to steep in warm water. The root bark and the aromatic inner bark have expectorant and mild sedative properties and a tea made from either of them has been used to ease pain in the early stages of labour. The tea is also used in the treatment of fevers, colds, sore throats, diarrhoea etc. The bark is harvested in the autumn and should not be stored for longer than one year since it quickly loses its medicinal properties. Young thin bark is preferred. A decoction of the inner bark has been used in the treatment of laryngitis. The root bark has been used as a wash on old sores and ulcers. The bark contains the glycoside prunasin, which is converted in the digestive tract to the highly toxic hydrocyanic acid. Prunasin is at its highest level in the bark in the autumn so the bark is harvested at this time and can be dried for later use. In small amounts this exceedingly poisonous compound stimulates respiration, improves digestion and gives a sense of well-being. The fruit is astringent and has been used in the treatment of dysentery.

Prunus serotina,Wild Cherry Bark is a deciduous Tree growing to 18 m (59ft) by 8 m (26ft) at a fast rate.
It is hardy to zone 3. It is in flower from May to June, and the seeds ripen in September. The flowers are hermaphrodite (have both male and female organs) and are pollinated by Insects.

Requires a well-drained moisture retentive soil. Requires a warm sunny position. Thrives in a loamy soil, doing well on limestone. Prefers some chalk in the soil but apt to become chlorotic if too much is present. A fast-growing and moderately long-lived tree in the wild, producing a heavy fruit crop about once every 4 years. It is cultivated for its timber in C. Europe. This species produces an abundance of flowers and usually fruits well in Britain. In the wild the tree begins to fruit when about 10 years old and then continues for about 100 years, fruiting well in most years. Most members of this genus are shallow-rooted and will produce suckers if the roots are damaged. Plants in this genus are notably susceptible to honey fungus.

Seed – requires 2 – 3 months cold stratification and is best sown in a cold frame as soon as it is ripe. Sow stored seed in a cold frame as early in the year as possible. Protect the seed from mice etc. The seed can be rather slow, sometimes taking 18 months to germinate. Prick out the seedlings into individual pots when they are large enough to handle. Grow them on in a greenhouse or cold frame for their first winter and plant them out in late spring or early summer of the following year. Cuttings of half-ripe wood with a heel, July/August in a frame. Softwood cuttings from strongly growing plants in spring to early summer in a frame. Layering in spring.

Collection: The bark is gathered from young plants in the autumn, when it is most active. The outer bark is stripped off and the inner bark is carefully dried in the shade. It must be stored in an air tight container and protected from light.

Fruit – raw or cooked in pies, jellies, stews etc. It must be fully ripe or else it will have a bitter flavour. The fruit can taste sweet or bitter. The better fruits have a thin skin and a juicy flesh with a pleasant vinous flavour. The fruit can also be used as a flavouring. The taste is best when the plant is grown in a sunny position. The fruit is about 9mm in diameter and contains one large seed. Seed – raw or cooked. Do not eat the seed if it is too bitter – see the notes above on toxicity. An infusion of the twigs is used as a beverage. An extract from the bark is used commercially as a flavouring in soft drinks, sweets, syrups and baked goods.

Indications: Wild Cherry Bark Cough Syrup is where we commonly come across this useful herb due to its powerful sedative action on the cough reflex, Wild Cherry Bark finds its main use in the treatment of irritating coughs and thus has a role in the treatment of bronchitis and whooping cough. It can be used with other herbs in the control of asthma. It must be remembered, however, that the inhibition of a cough does not equate with the healing of a chest infection, which will still need to be treated. It may also be used as a bitter where digestion is sluggish. The cold infusion of the bark may be helpful as a wash in cases of inflammation of the eyes.

To quote King’s at length: “Wild Cherry Bark has a tonic and stimulating influence on the digestive apparatus, and a simultaneous sedative action on the nervous system and circulation. It is, therefore, valuable in all those cases where it is desirable to give tone and strength to the system, without, at the same time, causing too great an action of the heart and blood vessels, as, during convalescence from pleurisy,pneumonia, acutehepatitis, and other inflammatory and febrile diseases. Its chief property is its power of relieving irritation of the mucous surfaces, making it an admirable remedy in many gastro-intestinal, pulmonic, and urinary troubles. LikeLycopus, it lessens vascular excitement, though it does not control hemorrhages like that agent. It is best adapted to chronic troubles. It is also useful in hectic fever,cough, colliquative diarrhoea, some forms of irritative dyspepsia, whooping-cough, irritability of the nervous system, etc., and has been found an excellent palliative in phthisis, the syrup being employed to moderate the cough, lessen the fever, and sustain the patient’s strength. It has likewise been of service in scrofula and other disease attended with much debility and hecticfever. Wild cherry is an excellent sedative in cardiac palpitation, not due to structural wrongs. It is particularly useful in this disorder when there is nervous fever, tuberculosis or the debility consequent upon irritative dyspepia, anemia, chlorosis, or nervous diseases. Externally, it has been found useful, in decoction, as a wash to ill conditioned ulcers and acute ophthalmia. Specific Indications and Uses. Rapid, weak circulation; continual irritative cough, with profuse muco-purulent expectoration; cardiac palpitation, from debility; dyspnoea; pyrexia; loss of appetite; and cardiac pain.”

Combinations: May be used widely with many different herbs.

Infusion: pour a cup of boiling water onto 1 teaspoonful of the dried bark and leave to infuse for 10-15 minutes. This should be drunk three times a day.

Other uses of Wild Cherry Bark:

A green dye can be obtained from the leaves. A dark grey to green dye can be obtained from the fruit. Wood – close and straight-grained, light, strong, rather hard, highly shock resistant. It bends well, works well, finishes smoothly, glues well, seasons well, shrinks moderately and is moderately free from checking and warping. It weighs about 36lb per cubic foot and takes a beautiful polish. It is widely used for furniture, cabinet making, the interior finish of buildings etc.

Lust, direction, frugality, favors, invisibility, and magickal potency. Burn as an incense while performing divination to enhance the results, or while performing love spells to find a partner. Use to revitalize the Magickal energy needed to finish an old project.