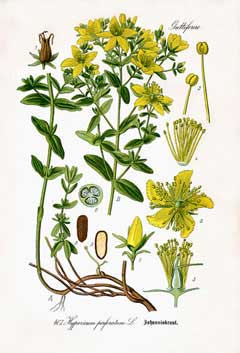 St John’s wort has a long history of  use as a medicinal herb. This herb has be deemed to be unsafe by the THR European licensing scheme and you will now only be able to buy old stock or get a prescription from a qualified herbalist in the UK. This I personally disagree with but it has been done as St John’s Wort Interactions with a range a medicines such as the pill and warfarin. It fell out of favour in the nineteenth century but recent research has brought it back to prominence as an extremely valuable remedy for nervous problems. In clinical trials about 67% of patients with mild to moderate depression improved when taking this plant. The flowers and leaves are analgesic, antiseptic, antispasmodic, aromatic, astringent, cholagogue, digestive, diuretic, expectorant, nervine, resolvent, sedative, stimulant, vermifuge and vulnerary. The herb is used in treating a wide range of disorders, including pulmonary complaints, bladder problems, diarrhoea and nervous depression. It is also very effectual in treating overnight incontinence of urine in children, bed wetting. Externally, it is used in poultices to dispel hard tumours, caked breasts, bruising etc. The flowering shoots are harvested in early summer and dried for later use. Use the plant with caution and do not prescribe it for patients with chronic depression. The plant was used to procure an abortion by some native North Americans, so it is best not used by pregnant women. A tea or tincture of the fresh flowers is a popular treatment for external ulcers, burns, wounds (especially those with severed nerve tissue), sores, bruises, cramps etc. An infusion of the flowers in olive oil is applied externally to wounds, sores, ulcers, swellings, rheumatism etc. It is also valued in the treatment of sunburn and as a cosmetic preparation to the skin. The plant contains many biologically active compounds including rutin, pectin, choline, sitosterol, hypericin and pseudohypericin. These last two compounds have been shown to have potent anti-retroviral activity without serious side effects and they are being researched in the treatment of AIDS. A homeopathic remedy is made from the fresh whole flowering plant. It is used in the treatment of injuries, bites, stings etc and is said to be the first remedy to consider when nerve-rich areas such as the spine, eyes, fingers etc are injured.

Hypericum perforatum, St John’s Wort is a PERENNIAL growing to 0.9 m (3ft) by 0.6 m (2ft in).
It is hardy to zone 3. It is in flower from May to August, and the seeds ripen from Jul to September. The flowers are hermaphrodite (have both male and female organs) and are pollinated by Bees, flies, self.The plant is self-fertile.

Easily grown in any reasonably good well-drained but moisture retentive soil Succeeds in dry soils. Plants grow well in sun or semi-shade but they flower better when in a sunny position. St John’s wort is often found as a weed in the garden. It grows well in the summer meadow and is a useful plant for attracting insects. The whole plant, especially when in bloom, gives off a most unpleasant smell when handled. Hypericum perforatum is apparently an allotetraploid that would appear to have arisen from a cross between two diploid taxa, viz. H. maculatum subsp. maculatum (Europe to western Siberia) and H. attenuatum (western Siberia to China.

Seed – sow in a greenhouse as soon as it is ripe in the autumn or in the spring. It normally germinates in 1 – 3 months at 10°c. Prick out the seedlings into individual pots when they are large enough to handle and plant them out into their permanent positions in the summer. Division in spring or autumn. Very easy, larger clumps can be replanted direct into their permanent positions, though it is best to pot up smaller clumps and grow them on in a cold frame until they are rooting well. Plant them out in the spring.

Collection: The entire plant above ground should be collected when in flower and dried as quickly as possible. You can easily check that you have the right type of Hypericum by holding the leaf up to the light only St John’s Wort will show pin pricks of light through the leaf.

The herb and the fruit are sometimes used as a tea substitute. The flowers can be used in making mead.

Indications: Taken internally, St. John’s Wort has a sedative and pain reducing effect, which gives it a place in the treatment of neuralgia, anxiety, tension and similar problems. It is especially regarded as an herb to use where there are menopausal changes triggering irritability and anxiety. It is increasingly recommended the treatment of depression. In addition to neuralgic pain, it will ease fibrositis, sciatica and rheumatic pain. Externally it is a valuable healing and anti-inflammatory remedy. As a lotion it will speed the healing of wounds and bruises, varicose veins and mild burns. The oil is especially useful for the healing of sunburn.

Priest & Priest tell us that it is a “sedative nervine for muscular twitching and choreiform movements especially indicated for nerve injuries to the extremeties and teeth/gums. Promotes elimination of catabolic waste products.” They give the following specific indications: Painful injuries to sacral spine and coccyx, traumatic shock,hemorrhoids with pain & bleeding, facial neuralgia after dental extractions and toothache, neurasthenia, chorea, depression.

Ellingwood considered it specific for “muscular bruises, deep soreness, painful parts. A sensation of throbbing in the body without fever. Burning pain, or deep soreness of the spine upon pressure, spinal irritation, circumscribed areas of intense soreness over the spinal cord or ganglia. Concussion, shock or injury to the spine, lacerated or punctured wounds in any location, accompanied with great pain.” In addition he recommends it for the following pathologies: tumors, caked breasts,enlarged glands, eccymosis, bruises, swellings.

Infusion: pour a cup of boiling water onto 1-2 teaspoonfuls of the dried herb and leave to infuse for 10-15 minutes. This should be drunk three times a day.

Tincture: take 1-4ml of the tincture three times a day.

Other uses of St John’s Wort:

Worn to prevent colds & fevers. Placed under pillow to induce prophetic, romantic dreams. Protects against all forms of black witchcraft. Place in a jar in a window or burn in a fireplace to protect from lightning, fire and evil spirits. Used for banishing, protection & blessing. Carry to strengthen courage and convictions or when confronting nasty situations. Burn to banish spirits and demons. Used in divination for the care of crystals. Note: Can be poisonous, use with caution.

Citations from the Medline database for the genus Hypericum

Mikrobiol Zh (1969 Mar-Apr) 31 (2): 128-33 Chaplinskaia MG Shteinberg MA Tribul’skaia ZF [Study of the photodynamic action of Hypericum in its external use]