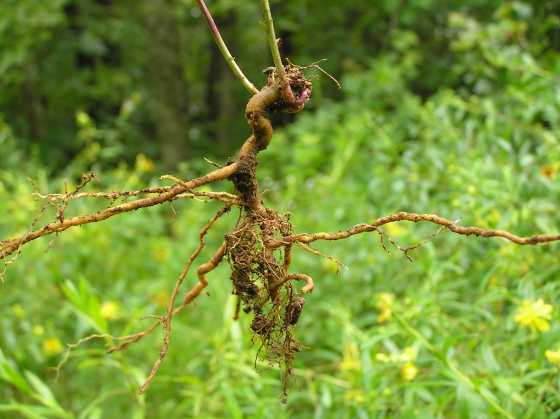 The plant is poisonous in large quantities, causing violent purging and vomiting. Reported to have caused anxiety,

mental dullness and vertigo. May disturb vision. Avoid if hypersensitive to aspirin or or salicylates. Avoid during pregnancy and lactation. Can lower blood sugars so avoid if diabetes mellitus.

Seneca snake root was employed as a medicinal herb by several native North American Indian tribes, who used it to treat a variety of complaints. It is still used in modern herbalism where it is valued mainly as an expectorant and stimulant to treat bronchial asthma, chronic bronchitis and whooping cough.The root contains triterpenoid saponins, these promote the clearing of phlegm from the bronchial tubes. The root is antidote, cathartic, diaphoretic, diuretic, emetic, expectorant, sialagogue, stimulant. It was used by the North American Indians in the treatment of snake bites and has been found of use in the treatment of various respiratory problems including pleurisy and pneumonia. The root is harvested when the plant dies down in autumn and is dried for later use. Use with caution, excess doses cause diarrhoea and vomiting. See also the notes above on toxicity. A tea made from the bark has been drunk in order to bring about a miscarriage. The dried root is used as a stimulating expectorant – it is said to owe its medicinal value to the presence of saponins and in large doses is poisonous.  The root has been used to treat snakebites, it is chewed and applied to the bite. The German Commission E Monographs, a therapeutic guide to herbal medicine, approve Polygala senega for cough/bronchitis.

Polygala senega; Snake Root is a PERENNIAL growing to 0.3 m (1ft) by 0.3 m (1ft in).
It is hardy to zone 2. It is in flower in June. The flowers are hermaphrodite (have both male and female organs)

Suitable for: light (sandy), medium (loamy) and heavy (clay) soils and prefers well-drained soil. Suitable pH: acid, neutral and basic (alkaline) soils and can grow in very alkaline soils.
It can grow in semi-shade (light woodland) or no shade. It prefers dry or moist soil.

Prefers a moderately fertile moisture-retentive well-drained soil, succeeding in full sun if the soil remains moist throughout the growing season, otherwise it is best in semi-shade. Dislikes shade according to another report. The sub-species P. senega latifolia. Torr.& Gray. is cultivated as a medicinal plant in Japan

Seed – sow spring or autumn in a cold frame. When they are large enough to handle, prick the seedlings out into individual pots and grow them on in the greenhouse for their first winter. Plant them out into their permanent positions in late spring or early summer, after the last expected frosts. Division. Cuttings of young shoots in a frame in late spring.

The root is harvested in the autumn. The leaves can be picked all year round.

Indications: Snake Root comes to us from the Seneca nation of Native Americans, who used it for a range of problems including snake bites. It has excellent expectorant effects which may be utilized in the treatment of bronchitic asthma, especially where there is some difficulty with expectoration. It has a general power of stimulating secretion, including saliva. It may be used as a mouthwash and gargle in the treatment of pharyngitis and laryngitis. If too much is taken it acts in a way that will irritate the lining of the gut and cause vomiting.

A quote from Ellingwood will be highly suggestive of the possibilities offered: ” The agent is indicated in typhoid pneumonitis, capillary bronchitis, in aged and debilitated subjects, chronic bronchitis with profuse secretion, in the declining stages of pnuemonitis, bronchitis and croup, when the inflammatory condition has passed off, chronic bronchitis with pain and soreness in the chest and asthma. The agent is in use in the treatment of dropsy from obstruction and glandular enlargement, also in rheumatism, syphilis, squamous skin diseases and in amenorrhoea. In inflammation of the eyelids and iritis it is beneficial. Snake Root has been employed as a stimulating expectorant in chronic bronchitis, in aged and debilitated subjects, where a stimulating medicine is demanded and in the later stages of pneumonia and catarrhal inflammation. In these cases, given in small doses, it improves secretion, removes abnormal deposits and restores the strength. It is an energetic stimulant to the mucous membranes of the air passages; and, when given before the inflammation has subsided, aggravates the cough and does harm. Given in small doses, it also acts as an alterative, and may thus be given in dropsy from obstruction, in syphilis, and in squamous skin diseases. In the treatment of chronic asthma this is an efficient remedy.”

Infusion: pour a cup of boiling water onto 1/2 teaspoonful of the dried root and leave to infuse for 5-10 minutes. Drink one cup three times a day.

Other uses of Snake Root:

To ward off snakes.