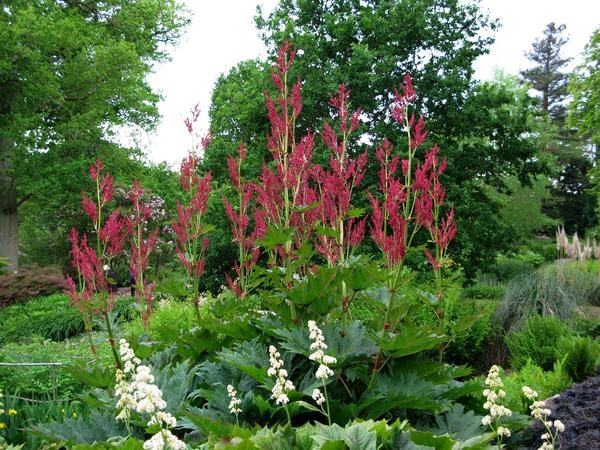 The leaves are poisonous. This report probably refers to high levels of oxalic acid found in the leaves. Perfectly safe in moderate quantities, oxalic acid can lock up certain minerals (especially calcium) in the body, leading to nutritional

deficiency. Cooking the plant will reduce its content of oxalic acid. People with a tendency to rheumatism, arthritis, gout, kidney stones or hyperacidity should take especial caution if including this plant in their diet since it can aggravate their condition. Laxative action side-effect with long term use may lead to electrolyte imbalances. Increase in aldosterone secretion, passage of albumin and blood in urine and intestinal movement loss.Avoid during pregnancy or when lactating.

Rhubarb, called Da Huang in China, has a long and proven history of us as a medicinal herb, its main effect being a positive and balancing effect upon the whole digestive system. It is one of the most widely used herbs in Chinese medicine. It has a safe and gentle action, safe even for children to use. The plant is also part of a North American formula called essiac which is a popular treatment for cancer. Its effectiveness has never been reliably proven or disproven since controlled studies have not been carried out. The other herbs included in the formula are Arctium lappa, Ulmus rubra and Rumex acetosella. The root is anticholesterolemic, antiseptic, antispasmodic, antitumor, aperient, astringent, cholagogue, demulcent, diuretic, laxative, purgative, stomachic and tonic. Rhubarb roots contain anthraquinones, which have a purgative effect, and also tannins and bitters, which have an opposite astringent effect. When taken in small doses, it acts as an astringent tonic to the digestive system, whilst larger doses act as a mild laxative. The root is taken internally in the treatment of chronic constipation, diarrhoea, liver and gall bladder complaints, haemorrhoids, menstrual problems and skin eruptions due to an accumulation of toxins. This remedy is not prescribed for pregnant or lactating women, nor for patients with intestinal obstruction. Externally, the root is used in the treatment of burns. The roots are harvested in October from plants that are at least six years old, they are then dried for later use. A homeopathic remedy is prepared from the dried root. This is used especially in the treatment of diarrhoea in teething children. The German Commission E Monographs, a therapeutic guide to herbal medicine, approve Rheum palmatum for constipation.

Rheum palmatum; Rhubarb is a PERENNIAL growing to 3 m (9ft) by 2 m (6ft).
It is hardy to zone 7. It is in flower from Jun to July, and the seeds ripen from Jul to September. The flowers are hermaphrodite (have both male and female organs) and are pollinated by Wind.

Suitable for: medium (loamy) and heavy (clay) soils, prefers well-drained soil and can grow in heavy clay soil. Suitable pH: acid, neutral and basic (alkaline) soils. It can grow in semi-shade (light woodland) or no shade. It prefers moist soil.

Prefers a deep, fertile, moderately heavy, humus rich, moisture retentive, well-drained soil in sun or semi-shade. Grows well in heavy clay soils. Plants can be grown in quite coarse grass, which can be cut annually in the autumn. Rhubarb is a large plant best planted at the back of a border. Hardy to at least -15°c. A very ornamental plant, there is at least one named variety. Hybridizes freely with other members of this genus. The sub-species R. palmatum tanguticum is cultivated as a medicinal plant in China, it was at one time a popular purgative in Europe. Plants in this genus seem to be immune to the predations of rabbits.

Seed – best sown in autumn in a shaded cold frame. The seed can also be sown in spring in a cold frame. When large enough to handle, prick the seedlings out into individual pots and grow them on in the greenhouse or cold frame for their first winter, planting them out in the spring. Division in early spring or autumn. Divide up the rootstock with a sharp spade or knife, making sure that there is at least one growth bud on each division. Larger divisions can be planted out direct into their permanent positions. We have found that it is better to pot up the smaller divisions and grow them on in light shade in a cold frame until they are well established before planting them out in late spring or early summer.

Leaf stem – raw or cooked. The stem is superior in flavour to the common rhubarb and quite tender. An acid flavour, it is sometimes used as a cooked fruit substitute.

Part Used: Rhizome of Rheum palmatum and other species, not the garden rhubarb we grow in the UK.

Indications: Rhubarb Root has a purgative action for use in the treatment of constipation, but also has an astringent effect following this. It therefore has a truly cleansing action upon the gut, removing debris and then astringing with antiseptic properties as well. Note: Rhubarb Root may color the urine yellow or red.

Ellingwood recommends it for the following patholgies: atonic conditions of the bowels, with debility or general relaxation, whether diarrhoea, dysentary,choleramorbus, cholera infantum.

Decoction: put 1/2 – 1 teaspoonful of the root in a cup of water, bring to the boil and simmer gently for 10 minutes.This should be drunk morning and evening.

Other uses of Rhubarb:

An insect spray is made from the leaves. This spray is also said to help prevent clubroot of brassicas. The cultivar ‘Atrosanguineum’ can be used as a ground cover plant in a sunny position. Other forms can also be used, they are best planted about 1.8 metres apart each way.