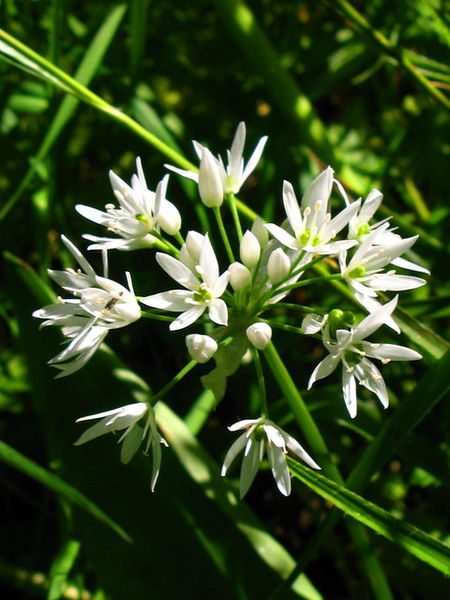 Habitat: Much of Europe, including Britain, east to the Caucasus and W. Asia. Damp soils in woods, copses, valleys and similar moist shady localities.

There have been cases of poisoning caused by the consumption, in very large quantities and by some mammals, of this species. Dogs seem to be particularly susceptible.

Ramsons is considered to be a very efficient spring tonic, giving a boost to our immune system. It thus promotes the general health of the body, having positive effects on the liver, gallbladder, stomach and intestines. It is particularly efficient in reducing high blood pressure and cholesterol levels. It also has a good effect on fermentative dyspepsia. It eases stomach pains and helps promote digestion, and therefore can be used in the treatment of diarrhea, colic, excessive gas, indigestion and loss of appetite. In form of an infusion, it can be used in treatment of threadworms. Additionally, Ramson can be beneficial in the treatment of asthma, bronchitis and emphysema. A juice made from the plant can be used in weight loss programs. Used externally, Ramson can be helpful as a circulation stimulant in cases of rheumatic and arthritic joints.

Allium ursinum; Ramsons is a BULB growing to 0.3 m (1ft) by 0.3 m (1ft in).
It is hardy to zone 5 and is not frost tender. It is in leaf 6-Feb It is in flower from May to June, and the seeds ripen from May to July. The flowers are hermaphrodite (have both male and female organs) and are pollinated by Bees, insects.

Prefers woodland conditions in a moist well-drained soil. Plants are often found in the wild growing in quite wet situations. When growing in suitable conditions, wild garlic forms a dense carpet of growth in the spring and can be a very invasive plant. It dies down in early summer, however, allowing other plants to grow in the same space[K]. The bulbs should be planted fairly deeply. The seeds are dispersed by ants.

Grows well with most plants, especially roses, carrots, beet and chamomile, but it inhibits the growth of legumes. This plant is a bad companion for alfalfa, each species negatively affecting the other. Members of this genus are rarely if ever troubled by browsing deer.

Seed – best sown as soon as it is ripe either in situ or in a cold frame. It germinates quickly and can be grown on in the greenhouse for the first year, planting out the dormant bulbs in the late summer of the following year. Stored seed can be sown in spring in a greenhouse. Division in summer after the plants have died down. Very easy, the divisions can be planted out straight into their permanent positions.

Leaves available from late January if the weather is with us! Use fresh.

The bulbs can be harvested at any time the plant is dormant from early summer to early winter. Harvested in early summer, they will store for at least 6 months.

Leaves – raw or cooked. Usually available from late January. One report says that they have an overpowering garlic odour that dissipates on cooking, though our experience is that they are considerably milder than garlic. The leaves make a very nice addition to salads, and are especially welcome as a vital and fresh green leaf in the middle of winter. Flowers – raw or cooked. These are somewhat stronger than the leaves, in small quantities they make a decorative and very tasty addition to salads. The flowering heads can still be eaten as the seed pods are forming, though the flavour gets even stronger as the seeds ripen. Bulb – raw or cooked. A fairly strong garlic flavour, though it is quite small and fiddly to harvest. The bulbs can be up to 4 cm long and 1 cm in diameter. The small green bulbils are used as a caper substitute. DO NOT FREEZE the fresh herb as freezing releases all the essential oils and everything in your freezer will smell of ramsons!

Ramsons has most of the health benefits of the cultivated garlic, A. sativum, though it is weaker in action. It is therefore a very beneficial addition to the diet, promoting the general health of the body when used regularly. It is particularly effective in reducing high blood pressure and blood cholesterol levels. It is recognised as having a good effect on fermentative dyspepsia. All parts of the plant can be used, but the bulb is most active. The plant is anthelmintic, antiasthmatic, anticholesterolemic, antiseptic, antispasmodic, astringent, cholagogue, depuritive, diaphoretic, diuretic, expectorant, febrifuge, hypotensive, rubefacient, stimulant, stomachic, tonic and vasodilator. Ramsons ease stomach pain and are tonic to the digestion, so they can be used in the treatment of diarrhoea, colic, wind, indigestion and loss of appetite. The whole herb can be used in an infusion against threadworms, either ingested or given as an enema. The herb is also beneficial in the treatment of asthma, bronchitis and emphysema. The juice is used as an aid to weight loss and can also be applied externally to rheumatic and arthritic joints where its mild irritant action and stimulation to the local circulation can be of benefit.

Other uses of Ramsons:

Magickal uses include healing, protection, exorcism, repulsion of vampires, and purification of spaces and objects. Used to invoke Hecate. Guards against negative magic, spirits, and the envy of others. Hang in the home to bring togetherness to the family or keep your willpower strong. Said to ward off bad weather when worn or carried during outside activities. Believed to absorb diseases — rub fresh, peeled garlic against ailing body parts then throw the garlic into running water.