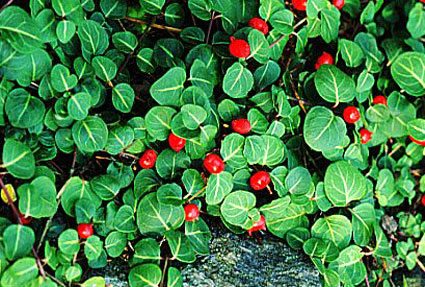 Habitat: N. America – Newfoundland to Florida, west to Texas and Minnesota. Dry or moist knolls in woods on sandy sub-strates.

Do not take during the first six months of pregnancy.

Partridge berry was commonly used by several native North American Indian tribes as a parturient to hasten childbirth. It was also occasionally used to treat a variety of other complaints including insomnia, rheumatic pain and fluid retention. It is still used in modern herbalism as an aid to childbirth and is also considered to have a tonic effect upon the uterus and the ovaries. The herb is astringent, diuretic, hypnotic and tonic. Frequent doses of a tea made from the fresh or dried leaves were used by N. American Indian women in the weeks preceding childbirth in order to promote easy delivery. This tea should not be used during the first six months of labour, however, since it can induce a miscarriage. The tea is also used to treat delayed, painful or irregular menses. The tea was also used externally as a wash for hives, swellings, sore nipples, rheumatism etc.  A tea made from the berries has a very definite sedating effect on the nervous system.

It is hardy to zone 3. It is in leaf 12-Jan. It is in flower from Jun to July. The flowers are hermaphrodite (have both male and female organs)

It can grow in semi-shade (light woodland) or no shade. It prefers moist soil.

Requires a moist but well-drained lime-free soil and some shade.  Prefers a peaty soil, succeeding in neutral to acid soils. Plants are hardy to at least -20°c. A trailing plant, the stems forming new roots at the nodes. The dried leaves have a scent of newly mown hay. The flowers have a pleasant sweet fragrance. Succeeds in the shade of trees, growing well in a woodland and in the rock garden. Plants can be difficult to establish, though they can become invasive once they are well established.

Seed – it germinates better if given 3 months cold stratification and so it is best sown as soon as it is ripe in the autumn. Sow stored seed as early in the year as possible. Make sure that all the fruit pulp is removed from the seed because it contains germination inhibitors. When they are large enough to handle, prick the seedlings out into individual pots and grow them on in the greenhouse for at least their first winter. Plant them out into their permanent positions in late spring or early summer, after the last expected frosts. Division of naturally layered stems in the spring. Cuttings.

Collection: Being an evergreen herb, it may be found all year round in the forest and woodland habitat it likes. It is best collected in flower between April and June. The leaves are harvested in the summer and dried for later use.

Fruit – raw. Pleasant and slightly aromatic. Dry and tasteless, with lots of seeds according to another report. The fruit hangs on well on the bush. The fruit is about 8mm in diameter. A tea is made from the leaves.

Indications: Partridge Berry is among the best remedies for preparing the uterus and whole body for child birth. For this purpose it should be taken for some weeks before the child is due, thus ensuring a safe and wonderful birth for both of you. It may also be used for the relief of painful periods. As an astringent it has been used in the treatment of colitis, especially if there is much mucus.

King’s Dispensatory says (note the 19th. language and implied racism): Partridge Berry is parturient, diuretic, and astringent. Used in dropsy, suppression of urine and diarrhoea, in decoction. It seems to have an especial affinity for the uterus, exerting a powerful tonic and alterative influence upon this organ, and has hence been found highly beneficial in many uterine derangements, as in amenorrhoea some forms of dysmenorrhoea, menorrhagia, chronic congestion of the uterus,enfeebled uterine nervous system, etc. It is said that the squaws drink a decoction of this plant for several weeks previous to their confinement, for the purpose of rendering parturition safe and easy. Similar virtues have been ascribed to it by competent physicians of our time. The remedy is peculiarly American, not being noticed or used by foreign practitioners. Dose of a strong decoction, from 2 to 4 fluid ounces, 2 or 3 times a day. The berries are a popular remedy for diarrhoea and dysuria. Used as follows, partridge berry is highly recommended as a cure for sore nipples: Take 2 ounces of the herb, fresh if possible, and make a strong decoction with a pint of water, then strain, and add as much good cream as there is liquid of the decoction. Boil the whole down to the consistence of a soft salve, and when cool, anoint the nipple with it every time the child is removed from the breast.

Cook: The greater portion of its power is expended upon the uterus, where its action is tonic and moderately antispasmodic; but it also influences the kidneys, testes, and the entire nervous system as connected with the generative organs. The chief value set upon it by most physicians is for its soothing and strengthening influence upon the uterus in hysteria, leucorrhea, prolapsus, and rheumatic or neuralgic pains, and chronic painful menstruation. Its action in all these connections is of the most beneficial character; at the same time that it steadily maintains a fair secretion of urine, and relieves aching of the back. It has been recommended in dropsy and gravel, but is only secondary in value. Used for several weeks before parturition, it allays the uterine crampings incident to the latter period of gestation, and so strengthens this organ as to make an easy labor much more probable.

The attention of physicians has been so much fixed on the above uses of Mitchella, that its influence upon other portions of the system has almost been overlooked. For all forms of nervous feebleness and irritability of a chronic character, it is an excellent agent; and it exerts a highly favourable influence over spermatorrhea. I have used it largely in the management of this malady, especially in combination with the flowers of Althea,Celastrus, and Uva ursi, and commend it earnestly to the profession. On the mucous membranes it exerts a mild tonic influence, which slowly abates excessive mucous discharges, and has led most writers to pronounce it an astringent; but this action is wholly tonic, and may be used for catarrhal and leucorrheal discharges, as well as for chronic dysentery.

Combinations: As parturient to prepare for childbirth it may be used with Raspberry Leaves. For dysmenorrhoea it could be combined with Cramp Bark and Pasque Flower.

Infusion: pour a cup of boiling water onto 1 teaspoonful of the herb and let infuse for 10-15 minutes. This should be drunk three times a day.

Other uses of Partridge Berry:

Partridge Berry ground cover plant in a shady position. Plants form a spreading carpet, rooting along the stems, and are best spaced about 30cm apart each way.

Magickal uses include all matters of fertility & childbirth. Pregnant women can add an infusion of Partridge Berry to bath water once a week to protect the unborn child from jealousy.