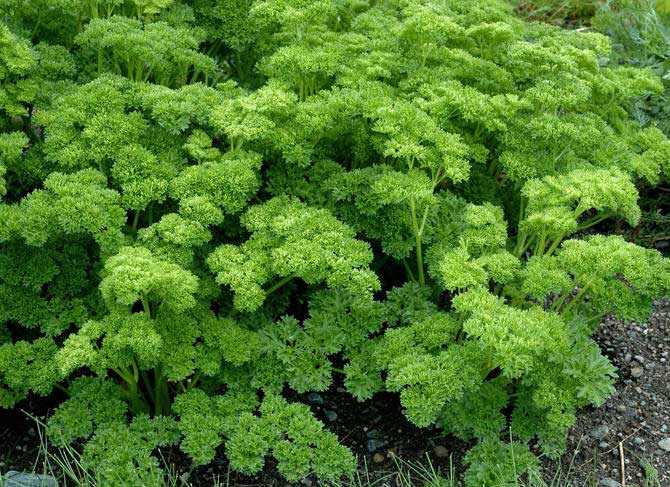 Parsley is said to contain the alleged ‘psychotroph’ myristicine. Excessive contact with the plant can cause skin inflammation. Although perfectly safe to eat and nutritious in amounts that are given in recipes, parsley is toxic in excess, especially when used as an essential oil. Avoid with oedema as may cause sodium and water retention. Avoid during pregnancy as parsley fruit associated with abortions. Avoid with kidney disease. Caution with allopathic medications as associated with serotonin activity.

Parsley is a commonly grown culinary and medicinal herb that is often used as a domestic medicine. The fresh leaves are highly nutritious and can be considered a natural vitamin and mineral supplement in their own right. The plants prime use is as a diuretic where it is effective in ridding the body of stones and in treating jaundice, dropsy, cystitis etc. It is also a good detoxifier, helping the body to get rid of toxins via the urine and therefore helping in the treatment of a wide range of diseases such as rheumatism. The seed is a safe herb at normal doses, but in excess it can have toxic effects. Parsley should not be used by pregnant women because it is used to stimulate menstrual flow and can therefore provoke a miscarriage. All parts of the plant can be used medicinally, the root is the part most often used though the seeds have a stronger action. Parsley is anti-dandruff, antispasmodic, aperient, carminative, digestive, diuretic, emmenagogue, expectorant, galactofuge, kidney, stomachic and tonic. An infusion of the roots and seeds is taken after childbirth to promote lactation and help contract the uterus. Parsley is also a mild laxative and is useful for treating anaemia and convalescents. Caution is advised on the internal use of this herb, especially in the form of the essential oil. Excessive doses can cause liver and kidney damage, nerve inflammation and gastro-intestinal haemorrhage.  A poultice of the leaves has been applied externally to soothe bites and stings, it is also said to be of value in treating tumours of a cancerous nature. It has been used to treat eye infections, whilst a wad of cotton soaked in the juice will relieve toothache or earache. It is also said to prevent hair loss and to make freckles disappear. If the leaves are kept close to the breasts of a nursing mother for a few days, the milk flow will cease. The German Commission E Monographs, a therapeutic guide to herbal medicine, approve Petroselinum crispum Parsley for infection of the urinary tract, kidney and bladder stones.

C. and S. Europe. Naturalized in Britain. Grassy waste places on walls and rocks, especially on limestone and near the coast

Petroselinum crispum is a BIENNIAL growing to 0.6 m (2ft) by 0.3 m (1ft in).
It is not frost tender. It is in flower from Jun to August, and the seeds ripen from Jul to September. The flowers are hermaphrodite (have both male and female organs) and are pollinated by Insects. The plant is self-fertile.
It is noted for attracting wildlife.

Prefers a moist well-drained soil in sun or partial shade. Prefers a good light soil that is not too light or acid, growing poorly in light acid soils. Parsley is commonly cultivated for its edible leaves, there are many named varieties. Three main groups of varieties have developed over a period of time and these have been grouped into subspecies as detailed below:- P. crispum crispum. The curly leafed forms of parsley. This is the more ornamental form, especially when used as a dressing in salads, cooked meals etc. It also has a milder flavour. However the curly leaves tend to hold on to surface water and so they are more likely to contract fungal diseases in the winter. P. crispum neapolitanum Danert. Italian parsley. This has flat, or plain leaves and is considered to have a stronger flavour. This group is also hardier, in part at least because the leaves can shed water easily. P. crispum tuberosum (Bernh.)Crov. Hamburg parsley is a very distinct form with a swollen root that is used as a vegetable. The leaves are not of such good quality as the preceding forms, but can still be used as a flavouring. Parsley is fairly winter-hardy, though it usually dies down in the cold weather, coming back into growth in early spring. By moving some plants into a protected area such as a greenhouse in the winter, or by putting a frame around them, leaves can usually be made available all winter.

Parsley is superficially similar to several poisonous species, including Fool’s Parsley (Aethusa cynapium). Great care should be exercised if harvesting the plant from the wild. A good bee plant. A good companion plant, especially for growing near roses, tomatoes, carrots, chives and asparagus, giving them all added vigour and protection against certain pests, especially carrot root fly and rose beetles.

Seed – Three sowings can provide a year round supply of fresh leaves. The first sowing is made in a greenhouse in late winter. Prick out the seedlings into individual pots when they are large enough to handle and plant them out in mid to late spring. The second sowing is made outdoors in situ in the middle of spring and the third is also made in situ outdoors, this time in mid to late summer. Germination usually takes place in about 7 days at 25°c, though it can take 4 – 6 weeks. Germination time can be reduced by pre-soaking the seed for 12 hours in hot water that is allowed to cool quickly, but be careful not to overdo the heat and cook the seed. The seed remains viable in normal storage for 2 – 3 years.

Collection: Leaf all year the root in the autumn.

Leaves – raw or cooked. Parsley is frequently used as a garnish or as a flavouring in salads and many cooked dishes, but has too strong a flavour to be eaten in quantity for most palates. Parsley Sauce for Fish is a firm family favorite. Parsley recipes will be added as we go along.It is an ingredient of the herb mix ‘bouquet garni’. The leaves should be harvested regularly in order to encourage fresh growth and get maximum yields. The leaves are difficult to dry but are easily frozen. For drying they require a well-ventilated room that receives long hours of sunlight – the leaves need to be quite crisp if they are to store. Very rich in iron, iodine and magnesium, parsley is also a good source of other minerals and the vitamins A, B and C. The stems can be dried and ground and used as a food colouring. A tea is made from the fresh or dried leaves, it is rich in vitamin C. An essential oil is obtained mainly from the leaves – it is used as a commercial food flavouring. The leaves yields about 1% essential oil, whilst about 6% is obtained from the seed. Some caution is advised on the use of this plant, especially the essential oil. See the notes above on toxicity.

The fresh herb, so widely used in cookery, is a rich source of vitamin C. Medicinally, Parsley has three main areas of usage. Firstly, it is an effective diuretic, helping the body get rid of excess water and so may be used wherever such an effect is desired. Remember, however, that the cause of the problem must be sought and treated -don’t just treat symptoms.The second area of use is as an emmenagogue stimulating the menstrual process.It is advisable not to use parsley in medicinal dosage during pregnancy as there may be excessive stimulation of the womb. The third use is as a carminative, easing flatulence and the colic pains that may accompany it. CAUTION: Do not use during pregnancy in medicinal dosage.

Infusion: pour a cup of boiling water onto 1-2 teaspoonfuls of the leaves or root and let infuse for 5-10 minutes in a closed container. This should be drunk three times a day.

A good companion plant, repelling insects from nearby plants. The juice is an effective mosquito repellent when it is rubbed into the skin and is also used to relieve the pain of stings and bites. An essential oil obtained from the plant is used in perfumeries for men. An infusion of the leaves is an excellent rinse for dark hair and also helps in the treatment of dandruff.

Calms and protects the home; Draws prosperity, financial increase, and luck. Restores a sense of well-being. Use in spells to increase strength & vitality after surgery or illness. Use in amulets or other magickal workings to help yourself out of a rut. Eat to provoke lust and promote fertility. Place on plates of food to guard against contamination. Useful for bath magick to purify and end misfortune. Mix with jasmine and carry in your shoe to make you more attractive to the opposite sex.