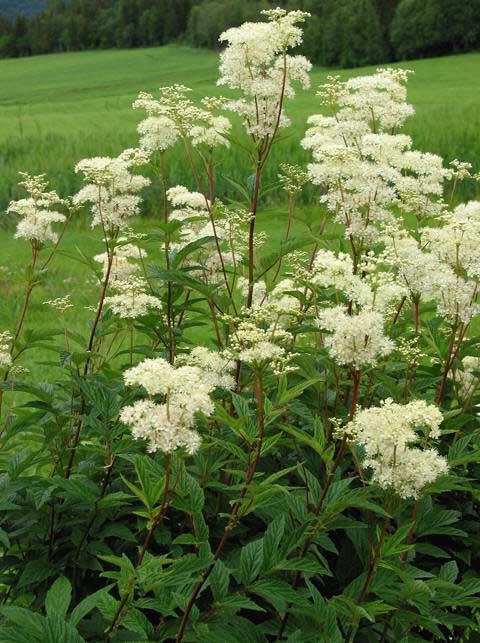 Habitat: A common wild plant in Britain, throughout Europe, parts of Asia and an escape in North America. Wet ground in swamps, marshes, fens, wet woods and meadows, wet rock ledges and by rivers, but not on acid peats.

Avoid for asthmatics. Use by children for diarrhoea not recommended or for children under 12 due to salicylate content (risk of Reye’s syndrome)

Meadowsweet has a very long history of herbal use, it was one of the three most sacred herbs of the Druids . The leaves and flowering stems are alterative, anti-inflammatory, antiseptic, aromatic, astringent, diaphoretic, diuretic, stomachic and tonic.. The plant is harvested in July when it is in flower and can be dried for later use. The flower head contains salicylic acid, from which the drug aspirin can be synthesised. Unlike the extracted aspirin, which can cause gastric ulceration at high doses, the combination of constituents in meadowsweet act to protect the inner lining of the stomach and intestines whilst still providing the anti-inflammatory benefits of aspirin. The herb is a valuable medicine in the treatment of diarrhoea, indeed it is considered almost specific in the treatment of children’s diarrhoea. It is also considered to be a useful stomachic, being used to treat hyperacidity, heartburn, gastritis and peptic ulcers, for which it is one of the most effective plant remedies. It is also frequently used in the treatment of afflictions of the blood. Meadowsweet is also effective against the organisms causing diphtheria, dysentery and pneumonia. This remedy should not be given to people who are hypersensitive to aspirin. A strong decoction of the boiled root is said to be effective, when used externally, in the treatment of sores and ulcers. A homeopathic remedy is made from the fresh root. The German Commission E Monographs, a therapeutic guide to herbal medicine, approve Filipendula ulmaria Meadowsweet for cough, bronchitis, fever and cold.

Filipendula ulmaria, meadowsweet is a PERENNIAL growing to 1.2 m (4ft) by 0.4 m (1ft 4in).
It is hardy to zone 2 and is not frost tender. It is in flower from Jun to August, and the seeds ripen from Aug to September. The flowers are hermaphrodite (have both male and female organs) and are pollinated by Bees, flies, beetles, self.The plant is self-fertile.
It is noted for attracting wildlife.

Suitable for: light (sandy), medium (loamy) and heavy (clay) soils and can grow in heavy clay soil. Suitable pH: neutral and basic (alkaline) soils. It can grow in semi-shade (light woodland) or no shade. It prefers moist or wet soil.

Requires a humus-rich moist soil in semi-shade. Succeeds in full sun only if the soil is reliably moist throughout the growing season. Dislikes dry or acid soils. Does well in marshy soils. Grows well in heavy clay soils. The flowers have a strong sweet smell, which for many people is sickly. The leaves are also aromatic, though the scent is very different from the flowers. The leaves are pleasantly aromatic. A good bee plant. Members of this genus are rarely if ever troubled by browsing deer.

Collection: The fully opened flowers and leaves are picked at the time of flowering, which is between June and August. They should be dried gently at a temperature not exceeding 40 degrees C.

Indications: Meadowsweet is one of the best digestive remedies available and as such will be indicated in many conditions, if they are approached holistically. It acts to protect and soothe the mucous membranes of the digestive tract, reducing excess acidity and easing nausea. It is used in the treatment of heartburn, hyperacidity,gastritis and peptic ulceration. Its gently astringency is useful in treating diarrhoea in children. The presence of aspirin-like chemicals explains Meadowsweet’s action in reducing fever and relieving the pain of rheumatism in muscles and joints.

Combinations: With Marshmallow and Chamomile it will be very soothing for a whole range of digestive problems. For musculo/skeletal conditions consider combining with Black Cohosh, Willow Bark and Celery Seed for its anti-inflammatory effects.

Infusion: pour a cup of boiling water onto 1-2 teaspoonfuls of the dried herb and leave to infuse for 10-15 minutes. This should be drunk three times a day or as needed.

Tincture: take 1-4 ml of the tincture three times a day.

Other uses of Meadowsweet:

A black dye is obtained from the roots. It is brown. A yellow dye is obtained from the plant tops. An essential oil obtained from the flower buds is used in perfumery. The whole plant, but especially the leaves, was formerly used as a strewing herb, imparting an almond-like fragrance. Strongly aromatic, its delightful perfume would completely fill the room. Both flowers and leaves have been used in pot-pourri, retaining their scent for several months. The scent of the dried flowers becoming more and more pleasant with age.

Used to increase the chances of getting a job. Aids one during times of distress. Useful as an altar offering, especially during love magick. Burn or strew about the house to relieve disharmony in the home or remove tensions. Carry to gain popularity and friendship.