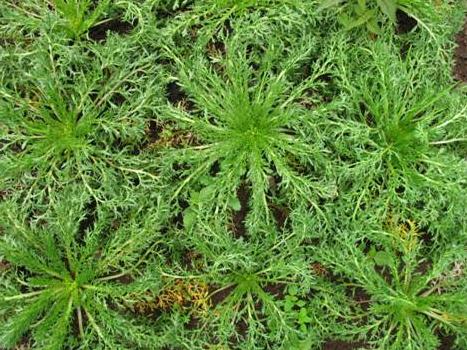 Maca has been a traditional food stuff of the Andes for thousands of years. It is first recording as being a herb which increased the fertility of life stock by the early Spanish settlers but this action has been found to ring true in humans. As a hormone balancer it is very valuable during the female menopause as it reduces hot flushes and increases energy along with sexual desire. Other traditional uses include increasing energy, stamina and endurance in athletes, promoting mental clarity, treating male impotence, and helping with menstrual irregularities and female hormonal imbalances which include menopause and chronic fatigue syndrome. It is used as an alternative to anabolic steroids by bodybuilders due to its richness in sterols. As it is traditionally a food it is safe to eat in large amounts and there are no known side effects.

Lepidium meyenii; Maca is a PERENNIAL growing to 0.0 m (0ft 2in) by 0.3 m (1ft).
It is not frost tender. The flowers are hermaphrodite (have both male and female organs) and are pollinated by Insects.The plant is self-fertile.

Maca grows at high altitudes in the Andes is an inhospitable region of intense sunlight, violent winds and below freezing weather. With its extreme temperatures and poor rocky soil, the area rates among the world’s worst farmland, yet over the centuries, Maca learned to flourish under these conditions. The plant is said to deplete the soil in which it is grown. In S. America it is grown on a 10 year rotation, leaving the fields fallow for the next nine years to recover before their next crop. It is most likely that the problem lies with the nutrient-poor and fragile soils that the plant is usually grown in, rather than the greed of the plant. Plants grow in areas where frosts are common throughout the growing season and they are said to tolerate temperatures down to at least -10°, perhaps to -20°c if given a good mulch. The main problem with growing them in the British climate is that they might need the rarefied heights of the Andes with thinner air and more intense solar radiation. It is quite likely that they will be unhappy in the moist and relatively sunless climate of this country. Cultivated as a vegetable in the Andes of S. America, this species is probably grown at higher elevations than any other cultivated food crop. There are some named forms. The roots are usually harvested 6 – 7 months after sowing the seed, though they can take 9 months to mature. Yields of 20 tonnes per hectare are possible. Plants are self-fertile. They are also quite possibly allelopathic (inhibiting the growth of nearby plants). Field experiments in Davis, California indicate that this crop can be grown during the winter in this area as an annual crop if irrigation is available throughout its whole life cycle. At Davis, 4 to 6-week-old seedlings transplanted in the field at the middle of September initiated hypocotyl development in 6-8 weeks. At this time of the year daylength is approximately 10 hours and mean soil temperature approximately 12°C. The ‘hypocotyls’ reached a maximum size of 35-50 mm in diameter 7 months after transplanting, when daylength was over 13 hours and mean soil temperature was approximately 20°C. By the middle of March, at the end of the rainy season, irrigation water was supplied as needed. Floral stems developed at this stage at the base of the stem, reaching anthesis and fruit-setting 8-9 months after sowing the seed. Therefore, most of the plants completed their seed-to-seed cycle in 10-11 months.

Seed – sow spring in a cold frame. When they are large enough to handle, prick the seedlings out into individual pots and grow them on in the greenhouse for their first winter. Plant them out into their permanent positions in late spring or early summer, after the last expected frosts. Division in spring.

Root – cooked. Sweet and pleasantly flavoured. They can be slowly baked. After being dried they are cooked in water to make a sweet aromatic porridge that is called ‘mazamorra’ in S. America. The nutritional value of dried Maca root is high, resembling cereal grains such as maize, rice and wheat. It has 59% carbohydrates, 10.2% protein, 8.5% fibre and 2.2% lipids. It has a large amount of essential amino acids and higher levels of iron and calcium than potatoes. Maca contains important amounts of fatty acids including linolenic, palmitic and oleic acids. It is rich in sterols and has a high mineral content as well. The root resembles a small pear in both size and shape and is up to 8 cm in diameter. The dried root contains about 13 – 16% protein and is rich in essential amino acids. The fresh root is unusually high in iodine and iron. The root does also contain small amounts of alkaloids, tannin and saponins. The dried roots store well, 7 year old roots still had 9 – 10% protein. Dried roots are brown, soft and sweet with a musky flavour, they retain their flavour for at least 2 years. Young leaves – raw or cooked. A hot cress-like flavour.

Maca is a little known medicinal herb and high energy food. It is growing in popularity due to its energizing effects, fertility enhancement and aphrodisiac qualities. Other traditional uses include increasing energy, stamina and endurance in athletes, promoting mental clarity, treating male impotence, and helping with menstrual irregularities and female hormonal imbalances including menopause and chronic fatigue syndrome.The roots are anti-fatigue, aphrodisiac, nutritive, immunostimulant, steroidal and tonic. Maca, as with all crucifers, contains glucosinolates and isothiocyanates which have been shown to exhibit anti-carcinogenicity by blocking formation of endogenous or exogenous carcinogens and so preventing initiation of carcinogenesis. Naturally occurring and synthetic isothiocyanates are among the most effective chemo-preventive agents known. A wide variety of isothiocyanates prevent cancer of various tissues including the rat lung, mammary gland, oesophagus, liver, small intestine, colon, and bladder. Non-published data suggests Maca has this same effect. Surprisingly, there is no apparent traditional use of Maca in the treatment of cancer. In traditional Peruvian herbal medicine, Maca is used as an immunostimulant and in the treatment of anaemia, tuberculosis, menstrual disorders, menopause symptoms, stomach cancer, sterility and other reproductive and sexual disorders as well as to enhance memory. A chemical analysis conducted in 1981 showed the presence of biologically active aromatic isothiocyanates, especially p-methoxybenzyl isothiocyanate, which have reputed aphrodisiac properties. Initial analysis of Maca indicate that the effects on fertility are a result of the glucosinolates. Alkaloids are also present, but have not yet been quantified. There are reports that this plant can cure many problems of infertility

Other uses of Maca:

None known other than food use.

None known although Aztec warriors were said to eat this food before battle to bring them success. If you do use this herb for any purpose please do let us know!

The nutritional value of dried maca root is high, similar to cereal grains such as rice and wheat. The average composition is 60-75% carbohydrates, 10-14% protein, 8.5% dietary fiber, and 2.2% fats. Maca is rich in the dietary minerals calcium and potassium (with low content of sodium), and contains the essential trace elements iron, iodine, copper,manganese, and zinc as well as fatty acids including linolenic acid, palmitic acid, and oleic acids, and 19 amino acids.

In addition to sugars and proteins, maca contains uridine, malic acid and its benzoyl derivative, and the glucosinolates, glucotropaeolin and m-methoxyglucotropaeolin. The methanol extract of maca tuber also contains (1R,3S)-1-methyltetrahydro-carboline-3-carboxylic acid, a molecule which is reported to exert many activities on the central nervous system. Many different alkamides were found in maca.

Further, maca contains selenium and magnesium, and includes polysaccharides. Maca‘s reported beneficial effects for sexual function could be due to its high concentration of proteins and vital nutrients; maca contains a chemical called p-methoxybenzyl isothiocyanate, which reputedly has aphrodisiac properties.