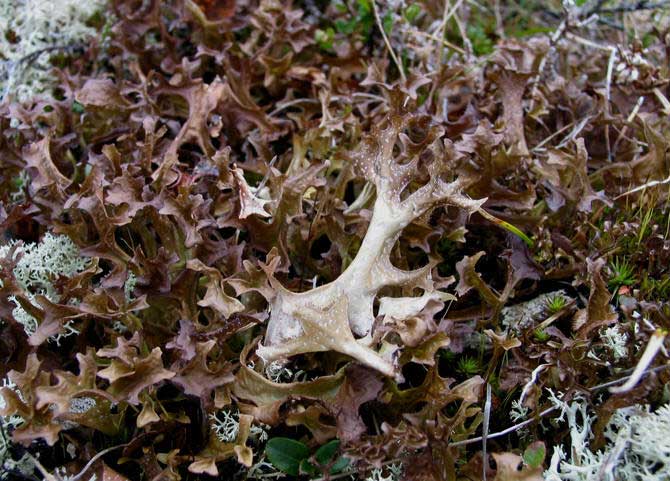 Iceland moss an excellent medicinal herb has been used since ancient times as a cough remedy and has also been used in European folk medicine as a cancer treatment. It is much more valuable than a moss that is merely used as a craft moss. In present day herbalism it is highly prized for its strongly antibiotic and demulcent actions, being used especially to soothe the mucous membranes of the chest, to counter catarrh and calm dry and paroxysmal coughs – it is particularly helpful as a treatment for elderly people. Iceland moss has both a demulcent and a bitter tonic effect within the gut – a combination almost unique amongst medicinal herbs. The whole plant is strongly antibiotic, antiemetic, strongly demulcent, galactogogue, nutritive and tonic. It is excellent when used internally in the treatment of chronic pulmonary problems, catarrh, dysentery, chronic digestive disturbances (including irritable bowel syndrome and food poisoning) and advanced tuberculosis. Externally, it is used in the treatment of boils, vaginal discharges and impetigo. The plant can be harvested as required throughout the year, preferably during dry weather, and can also be dried for later use. Use with caution. The German Commission E Monographs, a therapeutic guide to herbal medicine, approve Cetraria islandica for cough & bronchitis, dyspepsia, inflammation of mouth and pharynx, loss of appetite.

Habitat: Grows in most Northern Countries. Damp places, usually on rocks and the bark of trees, especially conifers.

There is no known information on the cultivation of this plant. It requires clean air and is very intolerant of atmospheric pollution so cannot be grown in towns. See the plants native habitat above for ideas on how it can be encouraged to grow. This species is a lichen, which is actually a symbiotic association of two different species, one an algae and the other a fungus. It is very slow-growing. This plant is often used in commercially produced disinfectants.

The only way of reproducing this plant is vegetatively. Almost any part of the plant can be used to produce a new plant, simply separate a portion and place it in its new home.

Collection: The lichen may be gathered throughout the year, though between May and September is perhaps best. It should be freed from attached impurities and dried in the sun or the shade.

A jelly is made by boiling the whole plant. It is nutritious and medicinal. Rather bitter, it requires leaching, which can be done by changing the cooking water once or twice during the cooking process. The dried and powdered plant can be mixed with wheat and used in making bread. It is very bitter and the process required to leach it is far too time-consuming and tedious to be countenanced.

Part used: The entire plant. It is a lichen.

As a soothing demulcent with its high mucilage content, Iceland Moss finds use in the treatment of gastritis, vomiting and dyspepsia. It is often used in respiratory catarrh and bronchitis, soothing mucous membranes. Its nourishing qualities contribute to the treatment of cachexia, a state of malnourishment & debility. It is very useful for regaining health after illness especially in elderly people.

King’s Dispensatory describes it as ” demulcent, tonic and nutritious. Excessive doses may induce nausea and looseness of the bowels, while ordinary doses improves the appetite, digestion and general nutrition. Constipation is not produced by it, and the circulation is unaffected. Its nutritive qualities are undoubtedly due to its starch. The bitterness of cetrarin may be detected in the nursing mother’s milk. Used as a demulcent in chronic catarrhs, chronic dysentary and diarrhoea, and as a tonic in dyspepsia, convalescence and exhausting diseases. Boiled with milk it forms an excellent nutritive and tonic in phthis is and general debility. It relieves the cough of chronic bronchitis.

For the treatment or nausea and vomiting, it can be combined with Black Horehound.

Decoction: put 1 teaspoonful of the shredded moss in a cup of cold water, boil for 3 minutes and let stand for 10 minutes. A cup should be drunk morning and evening.