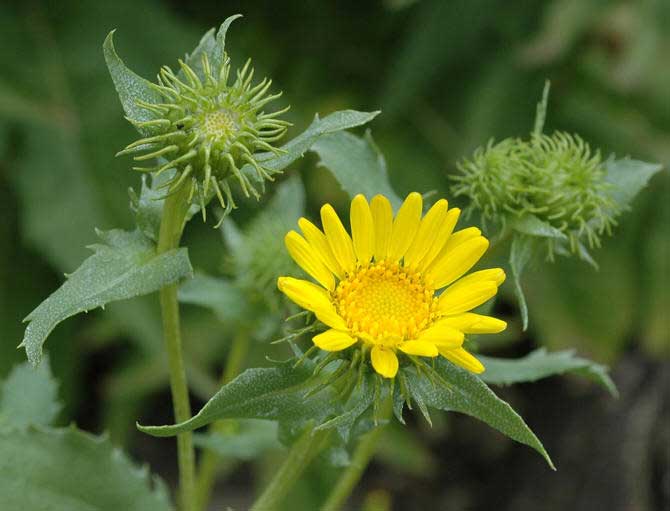 Grindelia was used by the native North American Indians as a medicinal herb to treat bronchial problems and also skin afflictions such as reactions to poison ivy. It is still used in modern herbalism where it is valued especially as a treatment for bronchial asthma and for states where phlegm in the airways impedes respiration. In addition, it is believed to desensitize the nerve endings in the bronchial tree and slow the heart rate, thus leading to easier breathing. The plant merits investigation as a treatment for asthma. The herb is contraindicated for patients with kidney or heart complaints. The dried leaves and flowering tops are anti-asthmatic, anti-inflammatory, antispasmodic, expectorant and sedative. The principal use of this herb is in the treatment of bronchial catarrh, especially when there is an asthmatic tendency, it is also used to treat whooping cough and cystitis. The active principle is excreted from the kidneys, and this sometimes produces signs of renal irritation. Externally, the plant is used as a poultice to treat burns, poison ivy rash, dermatitis, eczema and skin eruptions.

Do not use if there is under lying  condition of heart or kidney disease.

Habitat: The USA and S. America. Dry soils on prairies and roadsides. Calcareous soils in Texas.

Grindelia lanceolata is a BIENNIAL/PERENNIAL growing to 1.5 m (5ft).
It is hardy to zone 5. It is in flower from Jul to September. The flowers are hermaphrodite (have both male and female organs) and are pollinated by Insects.

Succeeds in any well-drained soil in full sun. Does well on dry sandy banks and in poor soils. Grows mainly in calacareous soils in the wild. Prefers a peaty loam soil. This is one of the first species to invade disturbed or denuded ground and often becomes a serious weed of grazing land. A very polymorphic plant.

Seed – sow autumn or spring in a cool greenhouse and only just cover the seed. Prick out the plants into individual pots when they are large enough to handle and plant them out into their permanent positions in early summer. Division as new growth commences in the spring. Very easy, larger clumps can be replanted direct into their permanent positions, though it is best to pot up smaller clumps and grow them on in a cold frame until they are rooting well. Plant them out in the spring.

Collection: The aerial parts are collected before the flower buds open.They are dried as soon as possible in the sun.

The following reports are for the related G. squarrosa, they probably also apply to this species. The fresh or dried leaves can be used to make an aromatic, slightly bitter but pleasing tea. A sticky resinous sap that covers the leaves can be used as a chewing gum substitute.

Grindelia acts to relax smooth muscles and heart muscles.This helps to explain its use in the treatment of asthmatic and bronchial conditions, especially where these are associated with a rapid heart beat and nervous response. It may be used in asthma,bronchitis, whooping cough and upper respiratory catarrh.Because of the relaxing effect on the heart and pulse rate, there may be a reduction in blood pressure. Externally the lotion is used in the dermatitis caused by poison ivy.

Kings Dispensatory discusses in detail the indications for two other species: “The grindelias leave in the mouth a bitter, acrid sensation, which persists for some time and is accompanied or followed by an increased flow of saliva. On account of their irritant effects upon. the kidneys, they act as diuretics. The brain and cord are first stimulated by them, followed by motor impairment of the lower extremities and a desire to sleep. The number of respirations are reduced by them. Grindelia robusta has been found especially efficient in asthma giving prompt relief, and effecting cures in cases previously rebellious to medication. Occasionally, however, as is,indeed, the case with all the therapeutical agents, it has failed but the circumstances attending these failures have not yet been determined. It has like wise been found efficient in bronchial affections, in pertussis, and in some renal maladies. Prof.Scudder was partial to this remedy as a local application in chronic diseases of the skin with feeble circulation, particularly old chronic and indolent ulcers. Grindelia squarrosa has been highly eulogized as an efficient remedy in intermittent fever. and in other malarial affections, also to remove the splenic enlargement which frequently follows those disorders. Why two plants so closely allied as the G. robusta and the G. squarrosa,and possessing nearly identical constituents, should give such discordant therapeutical results, is certainly enigmatical. The fact is, that many physicians have a great proneness to run after new remedies, especially when introduced under some pretentious name, and to place a marvelous credulity in the statements of interested parties, who are incapable of determining accurate conclusions as to the value of a remedy (note ~ this is a relevant today asit was a 100 years ago!). Webster, however, asserts that the remedy has a special action upon the splenic circulation, and points out as the case for it one of splenic congestion associated with sluggish hepatic action and dyspepsia. Dull pain in the left hypochondrium sallow skin,debility, and indigestion are the symptoms pointing to its selection.The same author recommends it in chronic dyspepsia due to prolonged malarial influence, gastric pain when the spleen is seemingly involved, and in the splenic congestion of malariac achexia. As a local application, the fluid extract is stated to be of value in the painful eczematous inflammation and vesicular eruption resulting from contact with the poison vine or the poison oak.”

In the treatment of asthmatic conditions it may be used with Lobelia and Pill-bearing Spurge.

Infusion: pour a cup of boiling water onto1 teaspoonful of the dried herb and leave to infuse for 10-15 minutes. This should be drunk three times a day.

None know but if you use it for any purpose please let us know!