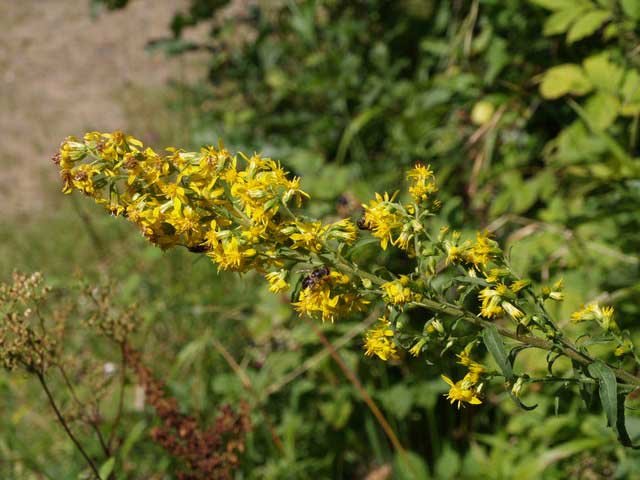 Goldenrod Herb is a safe and gentle medicinal herb for a number of disorders. In particular, it is a valuable astringent remedy treating wounds and bleeding, whilst it is particularly useful in the treatment of urinary tract disorders, being used both for serious ailments such as nephritis and for more common problems such as cystitis. The plant contains saponins that are antifungal and act specifically against the Candida fungus which is the cause of vaginal and oral thrush. It also contains rutin which is used to treat capillary fragility, and phenolic glycosides which are anti-inflammatory. The leaves and flowering tops are anthelmintic, anti-inflammatory, antiseptic, aromatic, astringent, carminative, diaphoretic, mildly diuretic, febrifuge and stimulant. A good vulnerary herb, it has also proved of value when used internally in the treatment of urinary infections, chronic catarrh, skin diseases, influenza, whooping cough, bladder and kidney stones etc. Due to its mild action, goldenrod is used to treat gastro-enteritis in children. It makes an excellent mouthwash in the treatment of thrush. The seed is anticoagulant, astringent and carminative. A homeopathic remedy is made from the plant. It is used in the treatment of kidney and bladder disorders, rheumatism and arthritis. The German Commission E Monographs, a therapeutic guide to herbal medicine, approve Solidago virgaurea for infection of the urinary tract, kidney & bladder stones.

Solidago virgaurea is a PERENNIAL growing to 0.6 m (2ft) by 0.4 m (1ft 4in).
It is hardy to zone 5. It is in flower from Jul to October, and the seeds ripen from Aug to October. The flowers are hermaphrodite (have both male and female organs) and are pollinated by Bees, flies, self.The plant is self-fertile.
It is noted for attracting wildlife.

An easily grown plant, it succeeds in any moderately fertile moisture retentive soil in sun or semi-shade. Grows well in heavy clay soils. A rather greedy plant, it is apt to impoverish the soil. The bruised plant smells like wild carrots. The sub-species S. virgaurea minuta is only 10cm tall and wide. The plant attracts various beneficial insects such as ladybirds, lacewings and hoverflies to the garden, these insects will help to control insect pests in the garden.

Seed – sow spring in a cold frame. Only just cover the seed and do not allow the compost to become dry. Prick out the seedlings into individual pots when they are large enough to handle, and grow them on for their first winter in pots. Plant them out into their permanent positions in spring or early summer. Division in spring or autumn. Larger divisions can be planted out direct into their permanent positions. We have found it best to pot up the smaller divisions and grow them on in a lightly shaded position in a cold frame, planting them out once they are well established in the summer.

Collection: Gather stalks at the time of flowering, which is between July and October, preferably from plants not yet blooming. Dry in the shade or not above a temperature of 40 degrees C.

A tea is obtained from the leaves.

Golden Rod is perhaps the first plant to think of for upper respiratory catarrh, whether acute or chronic, It may be used in combination with other herbs in the treatment of influenza. The carminative properties reveal a role in the treatment of flatulent dyspepsia. As an anti-inflammatory urinary antiseptic, Golden Rod may be used in cystitis, urethritis and the like. It can be used to promote the healing of wounds. As a gargle it can be used in laryngitis and pharyngitis.

Priest & Priest tell us that it is a “stimulating and slightly astringent tonic antiseptic to the mucous membranes. Specific for putrescent conditions. Suitable for bronchial disease in the elderly. Promotes renal excretion of fluid where micturation is scanty.” They give the following specific indications: influenza, repeated colds, catarrhal bronchitis with purulent expectoration, putrescent tonsillitis, naso-pharyngeal catarrh with sneezing and excessive mucus. Acute or chronic nephritis with albuminuria/haematuria.

For upper respiratory catarrh it may be used with Eyebright, Elder, Echinacea, Poke Root and Wild Indigo.

Infusion: pour a cup of boiling water onto 2-3 teaspoonfuls of the dried herb and leave to infuse for 10-15 minutes. This should be drunk 3 times a day.

Golden Rod produces mustard, orange and brown dyes from the whole plant. A yellow dye is obtained from the leaves and flowers.

Citations from the Medline database for the genus Solidago

Pharmazie 1987 Feb;42(2):140 (Published in German)Chodera et al [Diuretic effect of the glycoside from a plant of the Solidago L.genus]