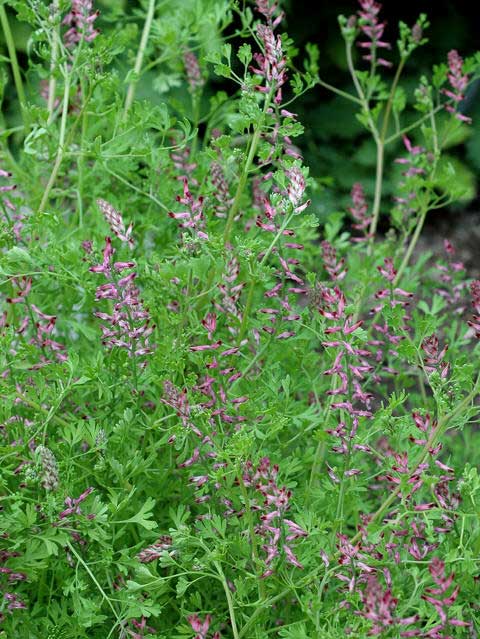 Fumitory has been highly valued medicinal herb since at least Roman times for its tonic and blood cleansing effect upon the body. It is particularly valuable in the treatment of all visceral obstructions, particularly those of the liver, in scorbutic affections and in troublesome eruptive diseases of the skin, especially eczema (for which it can be taken internally and externally). The herb is antispasmodic, aperient, cholagogue, slightly diaphoretic, mildly diuretic, laxative and weakly tonic. The plant is harvested as flowering begins in the summer and can be used fresh or can be dried for later use. Some caution should be exercised in the use of this herb since excess doses cause hypnotic and sedative effects, especially if it is taken for more than about 8 days.

Avoid in those with fits and epilepsy. Contraindicated with glaucoma patients. Avoid during pregnancy and breast-feeding. Allopathic medication for high blood pressure – effects increased.

Habitat: Common in Europe and the British Isles, especially in cultivated fields. It is also found growing on old walls.

Fumaria officinalis is a ANNUAL growing to 0.3 m (1ft) by 0.3 m (1ft in).
It is hardy to zone 5 and is not frost tender. It is in flower from May to September, and the seeds ripen from Jul to October. The flowers are hermaphrodite (have both male and female organs) and are pollinated by Bees, flies, self.The plant is self-fertile.

Suitable for: light (sandy) and medium (loamy) soils. Suitable pH: acid, neutral and basic (alkaline) soils. It can grow in semi-shade (light woodland) or no shade. It prefers moist soil.

Prefers a light well-drained soil in a sunny position. This plant can be a common weed in some gardens, self-sowing freely, though it is fairly easy to control by hand weeding. The flowers are seldom visited by insects, but they are self-fertile and usually set every seed.

Seed – sow spring in situ. There is normally very little need to sow this seed, the plant normally self-sows freely and should manage quite nicely by itself.

Collection: It should be collected when in flower, which is throughout the summer.

The fresh or dried herb can be added to sour plant milks. A few sprays are added to each litre of liquid and left until the liquid has soured thickly. The sprays are then removed. It gives a tangy taste to the milk, acts as a preservative and prevents the rancid taste that can accompany soured milk.

Fumitory has a long history of use in the treatment of skin problems such as eczema and acne. Its action is probably due to a general cleansing mediated via the kidneys and liver. Fumitory may also be used as an eyewash to ease conjunctivitis.

King’s dispensatory gives the following medical uses: “It is a weak tonic, very much used in cutaneous diseases, in jaundice, obstructions of the abdominal viscera, scurvy, and in cases of debility of the digestive organs. It is also slightly diaphoretic and aperient. Dose of the infusion, a wineglassful every 2 or 3 hours; of the expressed juice, half a wine glassful, 2 or 3 times a day. Two ounces of the tops and flowers infused in 3 pints of Madeira wine, and taken twice a day in doses of from 2 to 4 fluid ounces, will strengthen the stomach and improve the appetite.”

It may usefully be combined with Burdock, Cleavers or Figwort.

Infusion: pour a cup of boiling water onto 1-2 teaspoonfuls of the dried herb and let infuse for 10-15 minutes. This may be drunk freely, but for skin problems it should be drunk at least three times daily.

Associated with the underworld. Excellent for use at Samhain. Infusion is useful as a wash for consecrating ritual tools. Use in purification rituals when moving into a new residence. Make an infusion, then sprinkle the infusion around the house and rub on the bottom of shoes to bring quick financial gain.