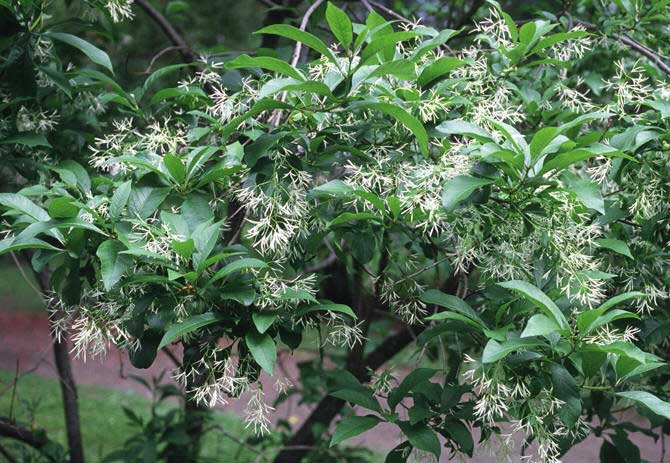 The fringe tree bark; Chionanthus virginicus, was commonly used by the North American Indians and European settlers alike as a medicinal herb to treat inflammations of the eye, mouth ulcers and spongy gums. In modern herbalism it is considered to be one of the most reliable remedies for disorders of the liver and gall bladder. The dried root bark is alterative, aperient, cholagogue, diuretic, febrifuge and tonic. It is used in the treatment of gallbladder pain, gallstones, jaundice and chronic weakness. A tincture of the bark was once widely used internally in the treatment of hypertrophy of the liver, jaundice, bilious headache, gallstones, rheumatism etc. The root bark also appears to strengthen function in the pancreas and spleen whilst anecdotal evidence indicates that it may substantially reduce sugar levels in the urine. Fringe tree also stimulates the appetite and digestion and is an excellent remedy for chronic illness, especially where the liver has been affected. A tea or a poultice can be made from the root bark for external use as a wash for wounds, inflammations, sores, infections etc.

Habitat: Eastern N. America – Florida and Texas north to New Jersey, Ohio and Missouri. Rich moist soils by the edges of streams and in damp woods and scrub.

Chionanthus virginicus is a deciduous Shrub growing to 5 m (16ft) by 3 m (9ft) at a fast rate.
It is hardy to zone 4. It is in flower in June, and the seeds ripen in October. The flowers are dioecious (individual flowers are either male or female, but only one sex is to be found on any one plant so both male and female plants must be grown if seed is required) and are pollinated by Bees. The plant is not self-fertile.

Fringetree  is suitable for: light (sandy), medium (loamy) and heavy (clay) soils. Suitable pH: acid, neutral and basic (alkaline) soils and can grow in very acid and very alkaline soils. Prefers a good loamy neutral to acid soil in full sun. Succeeds in partial shade but does not fruit so well in such a position.
It can grow in semi-shade (light woodland) or no shade. It prefers moist soil.

Fringetree plants flower more freely in areas with hotter summers and are slow-growing in areas with cool summers. A very ornamental plant, it is hardy to about -25°c. A fast-growing but short-lived tree in the wild, where it is remarkably free from diseases or insect pests. Plants begin to flower and bear fruit when they are 5 – 8 years old. The flowers have a delicate sweet perfume. Dioecious, male and female plants must be grown if seed and fruit is required. This species transplants easily. Plants in this genus are notably resistant to honey fungus.

Seed – Fringetree is best sown as soon as it is ripe in a cold frame. Germination is usually good. Stored seed can be sown in February or March in a warm greenhouse according to one report but germination can them take 18 months at 15 – 20°c. Alternatively the stored seed can be pre-soaked for 2 – 3 hours in warm water and then given 3 months warm stratification followed by 3 months at 2 – 4°c. Germination can then be fairly rapid. Prick out the seedlings into individual pots when they are large enough to handle and grow them on in a greenhouse or cold frame. Plant them out into their permanent positions the following spring or early summer. Layering in early summer as soon as new growth is long enough. Takes 15 months. Layering can also be carried out in spring or autumn.

Fruit – used as a pickle like olives. The fruit is up to 18mm long, it has a thin pulp and contains 1 – 3 rounded seeds.

Collection: The roots can be harvested at any time of the year, the bark is peeled from them and is then dried for later use.

Fringetree bark is a valuable medicinal herb may be safely used in all liver problems, especially when they have developed into jaundice. It is a specific for the treatment of gall-bladder inflammation and a valuable part of treating gall-stones. It is a remedy that will aid the liver in general and as such it is often used as part of a wider treatment for the whole body. Through its action of releasing bile it acts as a gentle and effective laxative.

Priest & Priest tell us that it is a “relaxing and stimulating hepatic and alterative: stimulates the discharge of bile, promotes digestion of fats. Corrects excessive discharge of mucus into the gastro-intestinal tract” They give the following specific indications: Duodenal catarrh, hepatic torpor, catarrhal jaundice, gallstones. Alimentary glycosuria. Pancreatic disease & glandular disorders. Chronic disease of liver/spleen.

Ellingwood considered it specific for “the liver. It is a remedy for hepatic engorgement; jaundice more or less pronounced; pain over the region of the gall-bladder; pain in the epigastrium; pain radiating from the navel over the abdomen; soreness in the region of the liver, extending to the umbilicus; enlargement of the of the liver, determined by percussion; nausea; occasional vomiting; constipation with dry faeces, temperature slightly above normal; skin usually yellow.” In addition he recommends it for the following patholgies: acute congestion of the liver, catarrh of the common bile duct, acute jaundice, bilious headaches, jaundice of childhood, malarial conditions, sugar in theurine, diabetes mellitus, typhoid fever.

Combinations: For the treatment of liver and gall-bladder conditions it may be used with Barberry, Wahoo or Wild Yam.

Infusion: pour a cup of boiling water onto 1-2 teaspoonfuls of the bark and leave to infuse for 10-15 minutes. This should be drunk three times a day.

Wood – hard, heavy, close grained, weighing about 39lb per cubic foot. Of no commercial value because of the small size of the tree.

None know but if you use it please let us know!