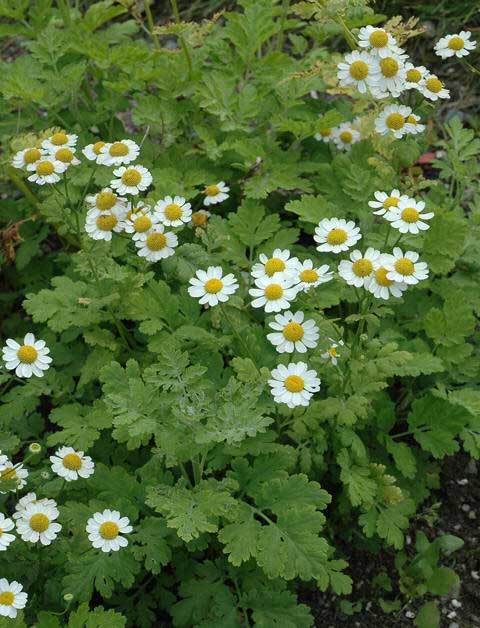 Feverfew Migraine: Feverfew has gained a good reputation as a medicinal herb and extensive research since 1970 has proved it to be of special benefit in the treatment of certain types of migraine headaches and rheumatism. It is also thought of as a herb for treating arthritis. The leaves and flowering heads are anti-inflammatory, antispasmodic, aperient, bitter, carminative, emmenagogue, sedative, stimulant, stings, stomachic, vasodilator and vermifuge. The plant is gathered as it comes into flower and can be dried for later use. Use with caution, the fresh leaves can cause dermatitis and mouth ulcers if consumed. This remedy should not be prescribed for pregnant women. A tea made from the whole plant is used in the treatment of arthritis, colds, fevers etc. It is said to be sedative and to regulate menses. An infusion is used to bathe swollen feet. Applied externally as a tincture, the plant is used in the treatment of bruises etc. Chewing 1 – 4 leaves per day has proven to be effective in the treatment of some migraine headaches

Do not use during pregnancy or with coagulation problems. Oral ulcers (aphothous ulcers in 5-15%) and/or gastrointestinal disturbances. Discontinuation may lead to rebound headaches, anxiety and insomnia.

Tanacetum parthenium is a PERENNIAL growing to 0.6 m (2ft) by 0.3 m (1ft in).
It is hardy to zone 6 and is not frost tender. It is in flower from Jul to August, and the seeds ripen from Aug to September. The flowers are hermaphrodite (have both male and female organs) and are pollinated by Bees, flies, self.The plant is self-fertile.

A very easily grown plant, it succeeds in an ordinary garden soil. Thrives in any kind of soil, plants can even be grown in walls. Often grown in the flower garden, feverfew is a short lived perennial but usually self-sows prolifically. There are many named varieties selected for their ornamental value. The cultivar ‘Golden’ (syn ‘Yellow’) has yellow tinted leaves. The leaves have a refreshing aromatic aroma.

Seed – sow spring in a greenhouse. Only just cover the seed and do not allow the pot to dry out. When they are large enough to handle, prick the seedlings out into individual pots and plant them out in early summer, after the last expected frosts. If you have sufficient seed it can be sown outdoors in situ during the spring. Plants usually self-sow freely and so, once you have the plant, further sowing is usually unnecessary. Division in spring. Since the plants are quite short-lived, this method is not really very serviceable.

Feverfew has regained its deserved reputation as a primary remedy in the treatment of migraine headaches, especially those that are relieved by applying warmth to the head. It may also help arthritis when it is in the painfully active inflammatory stage. Dizziness and tinnitus may be eased, especially if it is used in conjunction with other remedies. Painful periods and sluggish menstrual flow will be relieved by Feverfew. It is the only herb used in European phytotherapy known to be specific for the treatment of migraine. It is also the best example of a remedy well known to medical herbalists that has recently been accepted and used by allopathic medicine. It has been used throughout recorded medical history as a bitter tonic and remedy for severe headaches. Through wide media coverage in recent years, the herb has gained a well deserved reputation as a “cure” for migraine. Clinicians at the London Migraine Clinic observed that patients were reporting marked improvements when they took the herb. Thankfully, these doctors had the enquiring and open minds of the true scientist and so started their own investigations into the claims for Feverfew. Long term users often report beneficial side effects such as relief from depression, nausea and arthritic pain due to inflammation. Part of the herb’s action appears to be via an inhibition of secretion of the granular contents from platelets and neutrophils in the blood. This may be relevant to the therapeutic value of Feverfew in migraine and other conditions such as osteo-arthritis.

CAUTION: Feverfew should not be used during pregnancy because of the stimulant action on the womb. The fresh leaves may cause mouth ulcers in sensitive people.

It is best to use the equivalent of one fresh leaf 1-3 times a day.

Preferably use fresh, but tincture or tablets are adequate. In this case, freeze dried leaf preparations will be best, 50-100 mgs day.

Protection against accidents and cold/flu. Use in charms or sachets for love magick or spiritual healing. Keep flowers in suitcase or car when traveling.

Pharmacologists say that it is very likely that the sesquiterpenelactones inhibit prostaglandins and histamine released during the inflammatory process, so preventing spasms of the blood vessels in the head that trigger migraine attacks. As with all such impressive research findings, do not losesight of the importance of whole plant activity rather than simply identifying’active’ ingredients.

Feverfew
Feverfew (Tanacetum parthenium) is a traditional medicinal herb which is found in many old gardens, and is also occasionally grown for …

BotanicsEye website providing you with the latest articles straight from the world of botanical plants
Contact us: [email protected].com