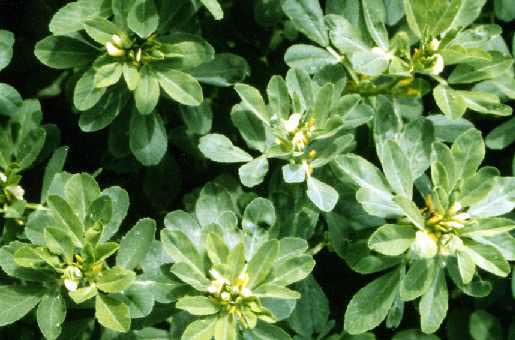 The seed contains 1% saponins. Although poisonous, saponins are poorly absorbed by the human body and so most pass through without harm.  Care for diabetics on antidiabetic allopathic as may lower blood sugar. Can affect drug absorption as high fibre content. Constituents can alter the effects of monoamine oxide inhibitors. Avoid during pregnancy.

Fenugreek is much used as a medicinal herb, especially in North Africa, the Middle East and India. It has a wide range of medicinal applications. The seeds are very nourishing and are given to convalescents and to encourage weight gain, especially in anorexia nervosa. The seeds should not be prescribed medicinally for pregnant women since they can induce uterine contractions. Research has shown that the seeds can inhibit cancer of the liver, lower blood cholesterol levels and also have an antidiabetic effect. The seed and leaves are anticholesterolemic, anti-inflammatory, antitumor, carminative, demulcent, deobstruent, emollient, expectorant, febrifuge, galactogogue, hypoglycaemic, laxative, parasiticide, restorative and uterine tonic. The seed yields a strong mucilage and is therefore useful in the treatment of inflammation and ulcers of the stomach and intestines. Taken internally, a decoction of the ground seeds serves to drain off the sweat ducts. The seed is very nourishing and body-building and is one of the most efficacious tonics in cases of physical debility caused by anaemia or by infectious diseases, especially where a nervous factor is involved. It is also used in the treatment of late-onset diabetes, poor digestion (especially in convalescence), insufficient lactation, painful menstruation, labour pains etc. The seeds freshen bad breath and restore a dulled sense of taste. Externally, the seeds can be ground into a powder and used as a poultice for abscesses, boils, ulcers, burns etc, or they can be used as a douche for excessive vaginal discharge. The leaves are harvested in the growing season and can be used fresh or dried. The seeds are harvested when fully ripe and dried for later use. Compounds extracted from the plant have shown cardiotonic, hypoglycaemic, diuretic, antiphlogistic and hypotensive activity. One of its constituent alkaloids, called ‘trigonelline’, has shown potential for use in cancer therapy. The seed contains the saponin diosgenin, an important substance in the synthesis of oral contraceptives and sex hormones[, whilst saponins in the plant have been extracted for use in various other pharmaceutical products. The German Commission E Monographs, a therapeutic guide to herbal medicine, approve Trigonella foenum-graecum for loss of appetite, inflammation of the skin.

Trigonella foenum-graecum is a ANNUAL growing to 0.6 m (2ft) by 0.4 m (1ft 4in) at a fast rate.
It is hardy to zone 6. It is in flower from Jun to August, and the seeds ripen from Aug to September. The flowers are hermaphrodite (have both male and female organs) and are pollinated by Insects.It can fix Nitrogen.

Succeeds in ordinary garden soil, preferring a well-drained loamy soil in full sun. Requires a warm, sheltered position in Britain. Plants are hardy to about -15°c. Fenugreek is widely cultivated for its edible seed in warm temperate and tropical regions, there are some named varieties. Seed production is more problematic in Britain due to the cooler and moister summers. The seed is ripened intermittently over a period of some weeks making harvesting more complicated. Plants take about 16 weeks to mature in warmer climes, probably about 4 weeks longer in Britain. This species has a symbiotic relationship with certain soil bacteria, these bacteria form nodules on the roots and fix atmospheric nitrogen. Some of this nitrogen is utilized by the growing plant but some can also be used by other plants growing nearby. When removing plant remains at the end of the growing season, it is best to only remove the aerial parts of the plant, leaving the roots in the ground to decay and release their nitrogen.

Pre-soak the seed for 12 hours in warm water and then sow in spring in situ.

Seed – cooked or sprouted and eaten raw . It has quite a strong spicy flavour, not unlike lovage or celery . When ground into a powder, the seed is a principal ingredient of curries and mango chutney , it is also used in pickles and spice mixes, as a flavouring in bread etc . The seed is usually lightly roasted before use in order to reduce the bitterness . The seed is about 3mm long, about 10 – 20 seeds being produced in each pod . A good source of many essential elements such as iron, phosphorus and sulphur , the seed contains about 6% moisture, 23% protein, 10% carbohydrate, 8% fat, 10% fibre and 4.3% ash . The ground seeds are used to give a maple syrup flavour to foods . The seed can be soaked for 12 hours in warm water and then allowed to sprout for 3 – 5 days . These sprouted seeds have a spicy flavour and can be added to salads or cooked . An essential oil obtained from the seed is used as a food flavouring in imitation maple syrup, vanilla compositions, liquorice, pickles etc . It also has medicinal virtues . The ground up seeds can also be used as a substitute for maple syrup . Leaves – raw or cooked . Very aromatic, in small quantities they can be added to salads, otherwise they are used as a potherb, a flavouring for root vegetables, an ingredient of curries etc . Seedpods – cooked . The roasted seed is a coffee substitute. A soothing tea is made from the leaves and the seed .

Fenugreek is a herb that has an ancient history. It was rarely used in Britain during the hay day of herbal medicine due to difficulties in obtaining the spice. Since becoming easily available it has often been overlooked because herbal tradition rarely mentioned it. For a comprehensive discussion of Fenugreek you must refer to an herbal or materia medica of Ayurvedic medicine. Its limited use in Britain demonstrates its value as a vulnerary, healing and reducing inflammation in conditions such as wounds, boils, sores, fistulas and tumors. It can be taken to help bronchitis and gargled to ease sore throats. Its bitterness explains its role in soothing disturbed digestion. Taking Fenugreek Breastfeeding is safe, it is a strong stimulator of milk production in mothers, for which it is perfectly safe, and has a reputation of stimulating development of the breasts.

Poultice; for external use, the seeds should be pulverized to make a poultice.

Decoction: to increase milk production, gently simmer 1 1/2 teaspoonfuls of the seeds in a cup of water for 10 minutes. Drink a cup three times a day. To make a more pleasant drink, add 1 teaspoonful of Aniseed to this mixture.

Fenugreek Extract or Tincture: take 1-2ml of the tincture three times a day.

An essential oil is obtained from the seed – used as a food flavouring and medicinally. The dried plant has a strong aroma of hay. The crushed seed, mixed with oil and massaged into the scalp, is recommended for glossy hair. An infusion of the seed, used as a skin lotion, is said to be good for the complexion. A good green manure crop, it is fast growing and vigorous, producing a lot of bulk and fixing a large quantity of atmospheric nitrogen. A yellow dye is obtained from the seed.

Used for money drawing and fertility magick. Use in floor washes to bring money to the home. Place in a jar and add a few seeds every day to increase money flow to the household.