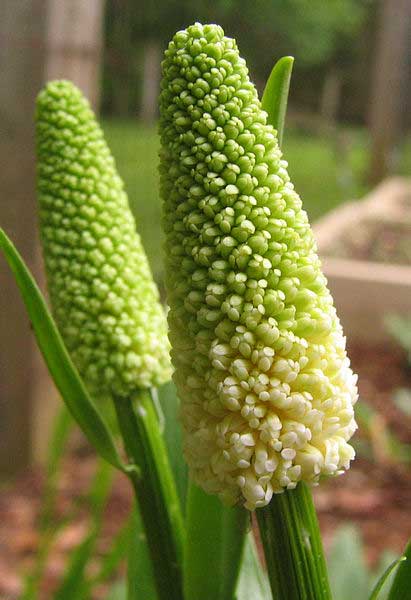 False Unicorn Root is a traditional remedy of the North American Indians where it was used mainly as a woman’s herb. It is widely used in Western herbal medicine where it is seen as a balancing herb for the female reproductive system and has proved to be a beneficial remedy for menstrual problems and ovarian cysts – it can also be of help in the menopause. The root is adaptogen, diuretic, emetic, uterine tonic and vermifuge. Small doses of the dried and powdered root are used. It is employed in the treatment of amenorrhoea, dysmenorrhoea and leucorrhoea and also for a variety of ailments associated with the male and female reproductive organs. It should be used with caution since an excess causes vomiting.

This plant is a cardiac toxin in large quantities. Large doses may cause nausea & vomiting. Chamaelirium luteum is an emmenagogue (promotes menstruation) so best avoided during pregnancy.

Chamaelirium luteum is a PERENNIAL growing to 0.5 m (1ft 8in) by 0.3 m (1ft).
It is hardy to zone 4. It is in flower from May to June. The flowers are dioecious (individual flowers are either male or female, but only one sex is to be found on any one plant so both male and female plants must be grown if seed is required)The plant is not self-fertile.

Suitable for: light (sandy) and medium (loamy) soils. Suitable pH: acid soils and can grow in very acid soils.
It can grow in semi-shade (light woodland) or no shade. It prefers moist soil.

Requires a moist fertile humus-rich acidic soil in sun or light dappled shade. Prefers a cool peaty soil. Plants are dioecious, male and female plants must be grown if seed is required.

Seed – sow as soon as it is ripe just below the surface of a peat/sand mix in pots in a cold frame. Keep cool and moist. Germination usually takes place within 1 – 6 months at 10°c. When large enough to handle, prick the seedlings out into individual pots and grow them on in pots plunged in a nursery bed for 1 – 2 years, giving protection from severe weather. Plant out in spring when the plants are large enough. Division.

Collection: The underground parts are unearthed in the autumn.

This herb, which comes to us via the North American Indians, is one of the best tonics and strengtheners of the reproductive system that we have. Though primarily used for the female system, it can be equally beneficial for men. It is known to contain precursors of the estrogens. However, it acts in an amphoteric way to normalize function. The body may use this herb to balance and tone and thus it will aid in apparently opposite situations. Whilst being of help in all uterine problems, it is specifically useful in delayed or absent menstruation. Where ovarian pain occurs, False Unicorn Root may be safely used. It is also indicated to prevent threatened miscarriage and ease vomiting associated with pregnancy. However, large doses will cause nausea and vomiting.

King’s Dispensatory: “Chamaelirium is tonic, diuretic, and vermifuge; in large doses, emetic, and, when fresh, sialagogue. In doses of 10 or 15 grains of the powdered root, repeated 3 or 4 times a day, it has been found very beneficial in dyspepsia, loss of appetite, and for the removal of worms. It is more especially applicable inindigestion, dyspepia, and mal-assimilation, where the trouble is reflex from, or associated with wrongs of the female reproductive apparatus. It is said to render the urine alkaline. It is reputed beneficial in colic, and is valuable in atony of the generative organs. I have found this plant to possess a decidedly beneficial influence in cases of sexual lassitude in both sexes, and of nocturnal emissions, the result of excesses, especially in those instances where there are symptoms of gastric derangement with impaired memory, mental apathy, or indifference, and an enfeebled condition of the general system, with weakness or dull pain in the renal, or lumbo-sacral region. In diseases of the reproductive organs of females, and especially of the uterus, it is one of our most valuable agents, acting as a uterine tonic, and gradually removing abnormal conditions, while at the same time it imparts tone and vigor to the reproductive organs. Hence, it is much used in leucorrhoea, amenorrhoea,dysmennorhoea, and to remove the tendency to repeated and successive miscarriages. A particular phase removed by it is the irritability and despondency that often attends uterine troubles. In painful menstruation it has been found especially adapted to those cases in which there is pelvic fullness, a sensation as if the womb and rectum were distended with blood, and the aching, bearing down organs feel as if they would fall out of the body. Its action here is very decided when the smaller doses are employed. It is considered useful by some for the relief of the vomiting of pregnancy. Chamaelirium is a decided tonic to the urinary tract and has exerted some benefit in diabetes insipidus. “

Cook describes it thus,”The root of helonias is a strong bitter, and one of the most distinctly stimulating of all tonics. It acts very generally upon the system, including in its range the salivary glands, respiratory organs stomach, gall-ducts, uterus, and ovaries. It stimulates the salivary flow, excites the fauces and respiratory passages, and promotes expectoration, for which purposes it is useful in greatly depressed and atonic conditions of the lungs, but should never be used in sensitive conditions. But its most prominent and valuable action is upon the uterine organs; where its carcely has an equal in atonic forms of prolapsus, leucorrhea, passive hemorrhage and menorrhagia, and similar enfeebled conditions. Though in no sense an astringent, its tonic influence is peculiarly efficacious in arresting too excessive menstruation and lochia, when associated with laxity and depression; and it rarely fails to arrest a threatened abortion arising from the same conditions. In these connections, it is one of the most reliable tonics in the Materia Medica.”

Decoction: put 1-2 teaspoonfuls of the root in a cup of water, bring to boiling and simmer gently for 10-15 minutes. This should be drunk three times a day. For threatened miscarriage it may be drunk copiously.

Magickal uses include lusty spells and protection for mother and baby