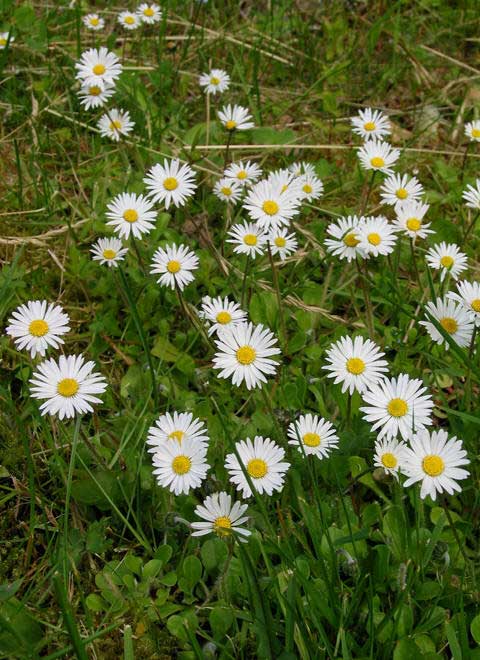 Habitat: Most of Europe, including Britain, to W. Asia. A common plant of meadows, lawns and other grassy areas, it is very frequently found growing in lawns.

Bellis perennis is an evergreen Perennial growing to 0.2 m (0ft 8in) by 0.2 m (0ft 8in).
It is hardy to zone 4 and is not frost tender. It is in leaf 12-Jan It is in flower from Jan to December, and the seeds ripen from May to October. The flowers are hermaphrodite (have both male and female organs) and are pollinated by Bees, flies, beetles, self. The plant is self-fertile.

Succeeds in most well-drained soils in sun or semi-shade. The daisy is commonly found growing in many lawns, some varieties have been developed for the flower garden. It is a good plant for the spring meadow. The plants have a very long flowering season, they will even produce a few flowers in the middle of mild winters.

Seed – sow as soon as the seed is ripe in June. When they are large enough to handle, prick the seedlings out into individual pots and plant them out in late summer. Division after flowering. Very easy, it can be done at almost any time of the year, though spring and early summer are best. The divisions can be planted straight out into their permanent positions.

Collection: The flowers may be picked between March and October.

Leaves – raw or cooked. The flavour is somewhat acrid. A pleasant sour flavour according to another report whilst a third says that they are mild and agreeable and are used in salad. The daisy is occasionally used as a potherb.

Daisy, one of  Britain’s most common plants, is useful for coughs and catarrh, and for all conditions that manifest in these forms, Daisy may be used freely and safely. It has a reputation of value in arthritis and rheumatism as well as in liver and kidney problems. Due to its astringency it is also useful for diarrhoea.

For respiratory catarrh it may be used with Golden Rod or Coltsfoot.

Infusion: pour a cup of boiling water onto 1 teaspoonful of the dried herb and leave to infuse for 10 minutes. This should be drunk three or four times a day.

Tincture; take 2-4 ml of the tincture three times a day.

An insect repellent spray can be made from an infusion of the leaves.

Love, luck, and innocence. Associated with babies and newborn infants. Incorporate into baby blessings & Wiccanings or to bring protective Magick into a baby’s sleeping area. Wear or carry to draw love.