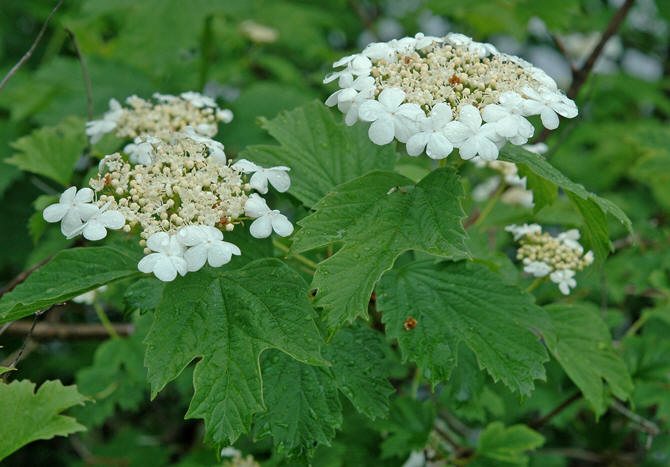 Large quantities of the fruit of Viburnum opulus can cause vomiting and diarrhoea. The fruit is of very low or zero toxicity, it only causes mild upsets when eaten unripe or in large quantities.

Habitat; Europe, including Britain, from Scandinavia south and east to Spain, north and west Asia. Hedges, scrub and woodland, usually on damp soils.

Viburnum opulus is a deciduous Shrub growing to 5 m (16ft) by 5 m (16ft) at a medium rate.
It is hardy to zone 3 and is not frost tender. It is in flower from June to July, and the seeds ripen from Sept to October. The flowers are hermaphrodite (have both male and female organs) and are pollinated by Insects, self. The plant is self-fertile.

An easily grown plant, it succeeds in most soils but is ill-adapted for poor soils and for dry situations. It prefers a deep rich moist loamy soil in a sunny position. Succeeds in semi-shade but does not grow or fruit so well in such a position. Grows well in heavy clay soils and on chalk. Does not do well on very acid soils. Best if given shade from the early morning sun in spring. A very ornamental plant, it is hardy to about -30°c and is often grown in the flower garden. There are many named varieties. Guelder rose regenerates quickly if it is cut to the ground, it can also produce suckers and will often form thickets. The plant is an alternative host for the broad bean aphid.

Seed – best sown in a cold frame as soon as it is ripe. Germination can be slow, sometimes taking more than 18 months. If the seed is harvested ‘green’ (when it has fully developed but before it has fully ripened) and sown immediately in a cold frame, it should germinate in the spring. Stored seed will require 2 months warm then 3 months cold stratification and can still take 18 months to germinate. Prick out the seedlings into individual pots when they are large enough to handle and grow them on in a cold frame or greenhouse. Plant out into their permanent positions in late spring or early summer of the following year. Cuttings of soft-wood, early summer in a frame. Pot up into individual pots once they start to root and plant them out in late spring or early summer of the following year. Cuttings of half-ripe wood, 5 – 8 cm long with a heel if possible, July/August in a frame. Plant them into individual pots as soon as they start to root. These cuttings can be difficult to overwinter, it is best to keep them in a greenhouse or cold frame until the following spring before planting them out. Cuttings of mature wood, winter in a frame. They should root in early spring – pot them up when large enough to handle and plant them out in the summer if sufficient new growth is made, otherwise keep them in a cold frame for the next winter and then plant them out in the spring. Layering of current seasons growth in July/August. Takes 15 month.

Fruit – raw or cooked. The fruit is up to 8.5mm in diameter but with a large seed. A sour taste, it is best cooked. The crushed fruit has an unpleasant smell. Used as a cranberry substitute in making, jellies, preserves etc. Some caution is advised, see notes on toxicity at top of the page.

Cramp Bark shows by its name the richly deserved reputation it has as a relaxer of muscular tension and spasm. It has two main areas of use. Firstly in muscular cramps and secondly in ovarian and uterine muscle problems. Cramp Bark will relax the uterus and so relieve painful cramps associated with periods (dysmenorrhoea). In a similar way it may be used to protect from threatened miscarriage. Its astringent action gives it a role in the treatment of excessive blood loss in periods and especially bleeding associated with the menopause.

Priest & Priest tell us that it is a “relaxing and stimulating nervine, cerebrospinal vaso-stimulant. Restores sympathetic/parasympathetic balance – has a specific action to relieve voluntary and involuntary muscular spasms.” They give the following specific indications: colicky pains and spasms of tubular organs: gastro-intestinal and genito-urinary use with with Dioscorea villosa. Atonic conditions of pelvic organs where menses is scanty or delayed.

Ellingwood considered it specific for “relieving irregular spasmodic pains of the womb & ovaries. It is antispasmodic in its action upon the entire pelvic viscera, influencing spasmodic contractions of the muscular structure of the bladder.”

King’s Dispensatory describes it as a “powerful antispasmodic”, recommending it use in cramps, spasms, asthma, hysteria, cramps of the limbs, convulsions during pregnancy, threatened miscarriage, hysteria, dysmenorrhoea, spasmodic contraction of the bladder, spasmodic stricture. The authors give V. opulus the following specific indications: cramps; uterine pain, with spasmodic action; pain in thighs and back; bearing down, expulsive pains; neuralgic or spasmodic dysmenorrhoea. As an anti-abortive.

Decoction: put 2 teaspoonfuls of the dried bark into a cup of water and bring to the boil. Simmer gently for 10-15 minutes. This should be drunk hot three times a day.

Tincture: take 4-8 ml of the tincture three times a day.

A red dye is obtained from the fruit. An ink can be made from the dried berries. Plants can be grown as a tall hedge, they are rather bare in winter though. The wood can be used to make skewers

Used for protection and female energy.