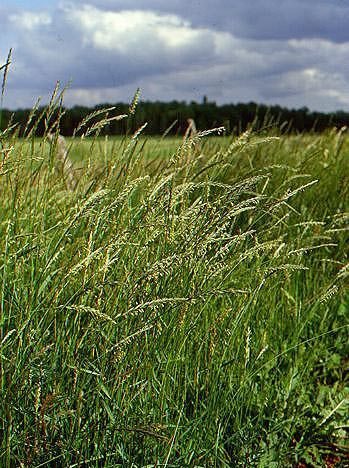 Habitat: Grows in many parts of the world, and all too frequently in gardens.

From its long creeping, pointed root-stock, it produces in July several round, hollow flower stems, 2 to 3 feet high, thickened at the joints, bearing five to seven leaves and terminated by long, densely flowered, two-rowed spikes of flowers, somewhat resembling those of rye or beardless wheat, composed of eight or more oval spikelets on alternate sides of the spike, each containing four to eight florets, the awns, when present, being not more than half the length of the flower. The leaves are flat, with a long, cleft sheath, and are rough on the upper surface, having a row of hairs on each principal vein.

One of the names of this grass is Dog’s grass, from its efficacy in relieving dogs when ill. They are often to be seen searching for its rough leaves, which they chew in order to procure vomiting. Culpepper closes his description of the grass by saying: ‘If you know it not by this description, watch the dogs when they are sick and they will quickly lead you to it,’ and concludes his account of its medicinal virtues with: ‘and although a gardener be of another opinion, yet a physician holds half an acre of them to be worth five acres of carrots twice told over.’

Gerard wrote:
‘Although that Couch-grasse be an unwelcome guest to fields and gardens, yet his physicke virtues do recompense those hurts; for it openeth the stoppings of the liver and reins without any manifest heat.’ He says concerning a variety of Couch-grass that –
‘the roots of this grass are knotty and tuberous in early spring, but in summer-time these bulbs lose all shape or form. . . . The learned Societie of London and the Physitions of the Colledge do hold this bulbous Couch grass in temperature agreeing with the common Couch Grass, but in vertues more effectual,’ and mentions it as ‘growing in the fields next to St. James’ Wall, as ye go to Chelsea, and in the fields as ye go from the Tower Hill of London to Radcliffe.’

Culpepper greatly praises its virtues for diseases of the kidneys.

The juice of the roots drank freely is recommended by Boerhaave in obstruction of the viscera, particularly in cases of scirrhous liver and jaundice, and it is noteworthy that cattle having scirrhous livers in winter soon get cured when turned out to grass in spring. Sheep and goats eat the leaves as well as cows, horses eat them when young, but leave them untouched when fully grown.

The ancients were familiar with a grass under the names of Agrostis and Gramen – having a creeping root-stock like the Couchgrass. Dioscorides asserts that its root, taken in the form of decoction is a useful remedy in suppression of urine and stone in the bladder. The same statements are made by Pliny, and are found in the writings of Oribasius and Marcellus Empiricus in the fourth century and of Ætius in the sixth century, and figures of the plant may be found in Dodoens’s herbal. The drug is also met with in the German pharmaceutical tariffs of the sixteenth century.

Formerly the decoction of Couch-grass roots was a popular drink taken to purify the blood in spring. The drug is still a domestic remedy in great repute in France, being taken as a demulcent and sudorific in the form of a tisane. Readers of Trilby will remember Little Billee being dosed with this, as most Parisians have been. The French also use the Cocksfoot-grass (Cynodon Dactylon), which they term Pied-de-poule, in a similar way and for a similar purpose.

Collection: The rhizome should be unearthed in spring or early autumn. Wash it, carefully dry in sun or shade.

Cultivation and Propagation of Couchgrass:

Are not necessary for this common grass.

Couchgrass may be used in urinary infections such as cystitis, urethritis and prostatitis. Its demulcent properties soothe irritation and inflammation. It is of value in the treatment of enlarged prostate glands. It may also be used in kidney stones and gravel. As a tonic diuretic, Couchgrass has been used with other herbs in the treatment of rheumatism.

Ellingwood says that “its action is solely upon the urinary apparatus. It exercises a soothing, diuretic influence, greatly increasing the flow of the watery portion of the urine without to the same extent influencing the actual renal secretion. It is bland, mild, unirritating, and is used whenever urine, having a high specific gravity, causes irritation of the kidneys or bladder, more especially of their mucous surfaces.” He recommends it for the following conditions: pyelitis, catarrhal and purulent cystitis, gonorrhoea, lithaemia, dysuria, tenesmus, prostatitis, strangury and haematuria.

For urinary tract infections it may be used with Buchu, Bearberry or Yarrow. It can be combined with Hydrangea for prostrate problems.

Decoction: put 2 teaspoonfuls of the cut rhizome in a cup of water, bring to boiling and let simmer for 10 minutes. This should be drunk three times a day.

None known but if you use it for any purpose please let us know!