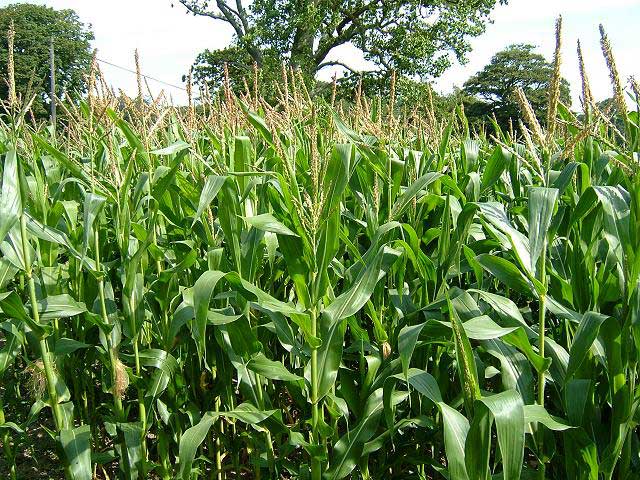 Zea mays, Corn is a ANNUAL growing to 2 m (6ft 7in) at a fast rate.
It is hardy to zone 9 and is frost tender. It is in flower from Jul to October, and the seeds ripen from Sep to October. The flowers are monoecious (individual flowers are either male or female, but both sexes can be found on the same plant) and are pollinated by Wind.

Requires a warm position a well drained soil and ample moisture in the growing season. Prefers a pH in the range 5.5 to 6.8. Requires a rich soil if it is to do well. Corn is widely cultivated for its edible seed, especially in tropical and warm temperate zones of the world, there are many named varieties[. Unfortunately, the plant is not frost tolerant and so needs to be started off under glass in Britain if a reasonable crop is to be grown. There are five main types:- Sweetcorn is of fairly recent development. It has very sweet, soft-skinned grains that can be eaten raw or cooked before they are fully ripe. Cultivars have been developed that can produce a worthwhile crop even in the more northerly latitudes of Britain if a suitable warm sunny sheltered site is chosen. Popcorn is a primitive form with hard-skinned grains. When roasted, these grains ‘explode’ to form the popular snack ‘popcorn’. Waxy corn is used mainly in the Far East. It has a tapioca-like starch. Flint corn, which shrinks on drying, can have white, yellow, purple, red or blue-black grains. It is not so sweet and also takes longer to mature so is a problematic crop in Britain. There are many other uses for this plant as detailed below. Dent corn has mostly white to yellow grains. This and Flint corn are widely grown for oils, cornflour, cereals and silage crops.

Seed – sow April in individual pots in a greenhouse. Grow on quickly and plant out after the last expected frosts. A direct outdoor sowing, especially of some of the less sweet varieties, can be tried in May.

Collection: The stigmas should be collected just before pollination occurs, the timing depends upon climate. It is best used fresh as some of the activity is lost with time.

Seed – raw or cooked. Corn is one of the most commonly grown foods in the world. The seed can be eaten raw or cooked before it is fully ripe and there are varieties especially developed for this purpose (the sweet corns) that have very sweet seeds and are delicious. The mature seed can be dried and used whole or ground into a flour. It has a very mild flavour and is used especially as a thickening agent in foods such as custards. The starch is often extracted from the grain and used in making confectionery, noodles etc. The dried seed of certain varieties can be heated in an oven when they burst to make ‘Popcorn’.. The seed can also be sprouted and used in making uncooked breads and cereals. A nutritional analysis is available. The fresh succulent ‘silks’ (the flowering parts of the cob) can also be eaten. An edible oil is obtained from the seed, it is an all-purpose culinary oil that is frequently used as a food in salads and for cooking purposes. The pollen is used as an ingredient of soups. Rich in protein, it is harvested by tapping the flowering heads over a flat surface such as a bowl. Harvesting the pollen will actually help to improve fertilisation of the seeds. The roasted seed is a coffee substitute. The pith of the stem is chewed like sugar cane and is sometimes made into a syrup.

As a soothing diuretic, Corn Silk is helpful in any irritation of the urinary system. It is used for renal problems in children and as a urinary demulcent combined with other herbs in the treatment of cystitis, urethritis, prostatitis and the like. The seed is diuretic and a mild stimulant. It is a good emollient poultice for ulcers, swellings and rheumatic pains, and is widely used in the treatment of cancer, tumours and warts. It contains the cell-proliferant and wound-healing substance allantoin, which is widely used in herbal medicine (especially from the herb comfrey, Symphytum officinale) to speed the healing process. The plant is said to have anticancer properties and is experimentally hypoglycaemic and hypotensive.

Combinations: With Couchgrass, Bearberry, Buchu or Yarrow in the treatment of cystitis.

Infusion: pour a cup of boiling water onto 2 teaspoonfuls of the dried herb and leave to infuse for 10-15 minutes. This should be drunk three times a day.

Tincture: take 3-6 ml of the tincture three times a day.

A glue is made from the starch in the seed. This starch is also used in cosmetics and the manufacture of glucose. A semi-drying oil is obtained from the seed. It has many industrial uses, in the manufacture of linoleum, paints, varnishes, soaps etc. The corn spathes are used in the production of paper, straw hats and small articles such as little baskets. A fibre obtained from the stems and seed husks is used for making paper. They are harvested in late summer after the seed has been harvested, they are cut into usable pieces and soaked in clear water for 24 hours. They are then cooked for 2 hours in soda ash and then beaten in a ball mill for 1½ hours in a ball mill. The fibres make a light greenish cream paper. Be careful not to overcook the fibre otherwise it will produce a sticky pulp that is very hard to form into paper. The dried cobs are used as a fuel. The pith of the stems is used as a packing material.