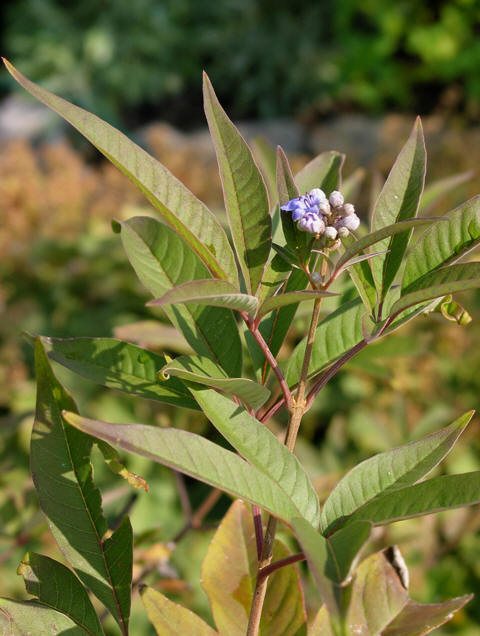 Habitat: Damp places by streams and on the littora. In Southern Europe.

Vitex agnus-castus, chasteberry is a deciduous Shrub growing to 3 m (9ft) by 3 m (9ft) at a medium rate.
It is hardy to zone 7. It is in leaf 10-Jun It is in flower from Sept to October. The flowers are hermaphrodite (have both male and female organs) and are pollinated by Insects.

Prefers a light well-drained loamy soil in a warm sunny position sheltered from cold drying winds. Succeeds in dry soils. Intolerant of water-logging . Hardy to about -10°c, this species only succeeds outdoors in the milder parts of Britain , though it grows well on a wall at Kew. Plants only flower freely in a warm summer, so they are best grown against a sunny wall even in areas of the country where they are hardy. The plants failed to open their flowers on our Cornish trial ground even after a very hot summer. The flowers are produced so late in the season that they are unlikely to produce viable seed in this country even if they flower properly. A very ornamental plant, there are some named varieties. The whole plant is aromatic, the leaves and stems are strongly aromatic, the flowers are deliciously scented  and the dried seeds have a pungent lemony perfume. This species has long been regarded as a symbol of chastity. Flowers are produced at the ends of the current year’s growth. Any pruning is best carried out in the spring and should consist of cutting out dead wood and shortening last year’s flowering branches.

Seed – sow March in a warm greenhouse. The seed does not need pre-treatment. Germination is usually free and quick. Prick out the seedlings into individual pots when they are large enough to handle and grow them on in the greenhouse for their first winter. Plant them out into their permanent positions in early summer of the following year. Cuttings of half-ripe wood, 5 – 8cm with a heel, July/August in a frame. Good percentage. Cuttings of mature wood of the current seasons growth, November in a cold frame.

Collection: The very dark berries should be picked when ripe, which is between October and November. They may be dried in sun or shade.

The fruit is used as a condiment, it is a pepper substitute. The aromatic leaves are also used as a spice. This plant forms one of the ingredients of the legendary Moroccan spice mixture ‘ras el hanout’. Unfortunately, the seed is very unlikely to be produced in Britain.

Indications: Chasteberry has the effect of stimulating and normalizing pituitary gland functions, especially its progesterone function. It may be called an amphoteric remedy, as it can produce apparently opposite effects though in truth it is simply normalizing. It has for instance a reputation as both an aphrodisiac and an anaphrodisiac! It will usually enable what is appropriate to occur. The greatest use of Chasteberry lies in normalizing the activity of female sex hormones and it is thus indicated for dysmenorrhoea, premenstrual stress, PMT and other disorders related to hormone function. It is especially beneficial during menopausal changes. In a similar way it may be used to aid the body to regain a natural balance after the use of the birth control pill.

Agnus castus has been used for thousands of years for its beneficial affect on the female hormonal system. Modern research has confirmed this use, the seeds being used to restore balanced functioning to the female reproductive system. The seeds and fruits are anaphrodisiac, aphrodisiac, galactogogue, ophthalmic, sedative, stomachic, women’s complaints. Prolonged usage restores corpus luteum function. Unfortunately, the berries are unlikely to be produced in the British climate. The berries of this plant have a range of medicinal actions but possibly the most important is its ability to rectify hormonal imbalances caused by an excess of oestrogen and an insufficiency of progesterone. It acts upon the pituitary gland, reducing the production of certain hormones and increasing the production of others, shifting the balance in favour of the gestagens. Thus it has a wide application of uses in malfunctions of the feminine reproductive system and has been used with great effect in restoring absent menstruation, regulating heavy periods, restoring fertility when this is caused by hormonal imbalance, relieving pre-menstrual tension, PMT and easing the change of the menopause. Some caution is advised since excessive doses can cause a nervous disorder known as formication, which manifests as a sensation of insects crawling over the skin. The berries are considered to be an aphrodisiac, though other reports say that they are anaphrodisiac. The reason for this apparent disagreement is that the berries have a regulating effect on the body and so are likely to increase sexual activity in those who are not very active in this area whilst reducing it in those who are very active. The fresh berries are pounded to a pulp and used in the form of a tincture for the relief of paralysis, pains in the limbs, weakness etc. Other uses include: reduced flatulence, suppress appetite and induce sleep. Unproven uses include: treatment of impotence, prostatitis, swelling of the testes, sterility, swelling of the ovaries. Not recommended during pregnancy and could inhibit milk production. The German Commission E Monographs, a therapeutic guide to herbal medicine approve Vitex agnus-castus for premenstrual syndrome, and menopausal complaints.

Here are some quotes from an article on Vitex by Medical Botanist Christopher Hobbs: “In 1930 Dr. Gerhard Madaus conducted some of the first scientific research on the plant and developed a patent medicine from an extract of dried fruits named Agnolyt . Almost all of the studies on Vitex have been done with this preparation. He found it to have a “strong corpus-luteum” effect, which increases progesterone. Scientists think that it regulates the pituitary gland, which detects increased estrogen levels and tells the ovaries to make less of it. Recent findings confirm that vitex helps restore a normal estrogen-to-progesterone balance.1 It can not only ease but, with time, actually cure premenstrual syndrome, which has been linked to abnormally high levels of estrogen, especially if symptoms tend to disappear when menstruation begins. Vitex can also help with irregular menstruation (especially if accompanied by endometriosis). In the late 1950’s, in a study of 51 women who had heavy bleeding and excessively short menstrual cycles, 65% of those who took Agnolyt showed improvement. About 47% of the women were entirely cured (those over 20 years old seemed to have the highest cure rate) Vitex also helps resolve hormonally-related constipation.

Other problems that Vitex can help include fibroid cysts that occur in the smooth muscle tissue, or subserous areas. However, vitex is less likely to be helpful with submucous cysts. Because progesterone production decreases at menopause, vitex may help reduce some of the undesirable symptoms. Herbalist David Hoffmann reports that the most important use of Vitex in England is for treating menopause symptoms, and that this is the only female health situation in which he uses vitex by itself. For relieving symptoms such as hot flashes, he claims good results after 2 or 3 months of taking 2 ml (65 drops) of vitex a day. Several studies indicate vitex can help control acne in teenagers, both among young women and men.

Vitex can stabilize the cycle after withdrawal from progesterone birth control pills. For women who are trying to get pregnant, vitex may be helpful to help regulate the ovulatory cycle. It can safely be taken throughout the end of the third month of pregnancy, which may help prevent miscarriage, according to German research. After the third month it is still safe to take but is not recommended, because it may bring on the flow of milk too early. In one carefully controlled study with 100 nursing mothers, it was found that women who took vitex had an increased milk flow compared to women who took a placebo.1 Later research showed that the best way to stimulate milk production is to take Vitex the first ten days after birth.

Clinical research shows that vitex may start working to treat imbalances after about 10 days, but for full benefit it should be taken up to 6 months or longer. With PMS, a positive result may be felt by the second menstruation, but permanent improvement may take up to a year or longer. Vitex has no reports of even moderate side effects – for over 2, 000years.”

Infusion: pour a cup of boiling water onto l teaspoonful of the ripe berries and leave to infuse for l0-l5 minutes. This should be drunk three times a day.

Basketry,  Dye,  Essential, Wood,
A perfume is made from the flowers . Young stems are used in basket making. A yellow dye is obtained from the leaves, the seed and the roots. Wood – hard, close grained.

Citations from the Medline database for the genus Vitex

Investigation of the treatment of female imbalances with Agnolyt.

Geriatrie (1972) 2: 239. Bhargava SK Antiandrogenic effects of a flavonoid-rich fraction of Vitex negundo seeds: a histological and biochemical study in dogs.