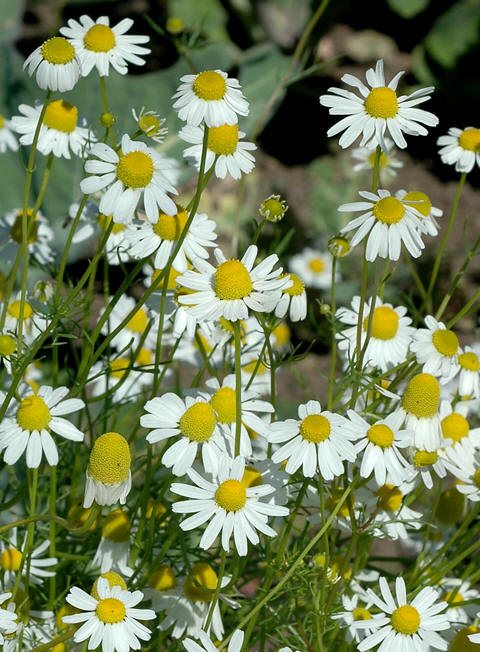 Patients with severe allergic responses to ragweed (ragwort) should be warned about the possible cross-sensitivity to chamomile and other members of the Asteraceae/Compositae family (e.g. echinacea, feverfew, milk thistle).

Western Europe, including Britain, from Belgium south to N. Africa and the Azores. Sandy commons, pastures and grassy roadsides.

Chamaemelum nobile is an evergreen Perennial growing to 0.2 m (0ft 8in) by 0.3 m (1ft).
It is hardy to zone 4 and is not frost tender. It is in leaf 12-Jan It is in flower from Jun to July, and the seeds ripen from Jul to October. The flowers are hermaphrodite (have both male and female organs) and are pollinated by Bees, flies, beetles, self.The plant is self-fertile.
Suitable for: light (sandy), medium (loamy) and heavy (clay) soils, prefers well-drained soil and can grow in nutritionally poor soil. Suitable pH: acid, neutral and basic (alkaline) soils and can grow in very alkaline soils.
It can grow in semi-shade (light woodland) or no shade. It prefers dry or moist soil and can tolerate drought.

Chamomile tolerates most well-drained soils, preferring a dry sandy soil and a sunny position. Tolerates partial shade. Established plants are drought tolerant. Can be grown in grass. Tolerates a pH in the range 6.8 to 8. Plants are hardy to at least -15°c. They often deteriorate in very wet or cold winters, but usually recover quickly in the spring and early summer. Chamomile is commonly grown in the domestic herb garden, it is also cultivated commercially for its flowers which are used in herb teas and medicinally. The double-flowered form is highly regarded for its medicinal virtues. Plants can be invasive when growing in good conditions, though they are easy to control. There is some confusion between this plant (which is a perennial) and the annual chamomile (Matricaria chamomilla) as to which is the genuine medicinal chamomile. Some reports say that this plant is the most effective herbally, whilst others says that Matricaria is more potent. Both plants seem to have very similar properties and either can probably be used quite successfully. The cultivar ‘Treneague’ is a low-growing non-flowering form that makes an excellent ground cover. Fairly tolerant of being walked on, it is sometimes used instead of grass for making a lawn though it is more difficult to maintain and can become weed infested, especially in its early stages. It also tends to become bare in places. The whole plant has a pungent aroma, this being especially noticeable on hot days or when the plant is bruised.

Camomile is a very good companion plant, promoting the health of plants it is growing close to, it is especially good for growing near cabbages, onions and, in small quantities, wheat.

The flowers are gathered in the summer when they are fully open and are distilled for their oil or dried for later use. They should not be stored for longer than 12 months.

Young sprigs are used as a seasoning and a flavouring in herb beers. The fresh or dried flowers are used to make herb teas. This has a strong aromatic odour and a bitter flavour, especially the single-flowered form. The whole herb is used for making herbal beers.

A comprehensive list of Chamomiles’ medical uses would be very long. Included would be insomnia, anxiety, menopausal depression, loss of appetite, dyspepsia, diarrhoea, colic, aches and pains of flu, migraine, neuralgia, teething, vertigo, motion sickness, conjunctivitis, inflamed skin, urticaria etc. etc.. This may seem too good to be true, but it reflects the wide range of actions in the body.

It is probably the most widely used relaxing nervine herb in the western world. It relaxes and tones the nervous system, and is especially valuable where anxiety and tension produce digestive symptoms such as gas, colic pains or even ulcers. This ability to focus on physical symptoms as well as under laying psychological tension is one of the great benefits of herbal remedies in stress and anxiety problems. Safe in all types of stress and anxiety related problems, it makes a wonderful late night tea to ensure restful sleep. It is helpful with anxious children or teething infants, where it is used as an addition to the bath.

As an anti-spasmodic herb, it works on the peripheral nerves and muscles, and so it indirectly relaxes the whole body. When the physical body is at ease, ease in the mind and heart follows. It can prevent or ease cramps in the muscles, such as leg or abdomen. As the essential oil added to a bath, it relaxes the body after a hard day whilst easing the cares and weight of a troubled heart and mind.

Being rich in essential oil, it acts on the digestive system, promoting proper function. This usually involves soothing the walls of the intestines, easing griping pains and helping the removal of gas. It is an effective anti-inflammatory remedy internally for the digestive and respiratory system as well as externally on the skin. A cup of hot Chamomile tea is a simple, effective way of relieving indigestion, calming inflammations such as gastritis and helping prevent ulcer formation. Using the essential oil as a steam inhalation will allow the same oils to reach inflamed mucus membranes in the sinuses and lungs.

Chamomile is a mild anti-microbial, helping the body to destroy or resist pathogenic micro-organisms. Azulene, one of the components of the essential oil, is bacteriocidal to Staphylococcus and Streptoccus infections. The oil from 0.10g of flowers is enough to destroy in 2 hours three times the amount of Staphylococcal toxins.

As an anti-catarrhal it helps the body remove excess mucus buildup in the sinus area. It may be used in head colds and allergy reactions such as hayfever. Mucous is not a problem in itself. It is an essential body product, but when too much is produced it is usually in response to an infection, helping the body remove the problematic organism, or as a way of the body removing excess carbohydrate from the body.

A review of recent scientific literature shows how much interest this venerable folk remedy is still receiving. Most of the clinical, therapeutic research comes from Europe, reflecting the respect Chamomile receives in the medical community there. Anti-inflammatory effects have been the main focus of research, being the official criteria for its inclusion in the Pharmacopeia. These properties explain the herbs value in a wide range of digestive if intestinal problems. Taken by mouth or used as an enema it is particularly helpful in colitis and irritable bowel syndrome. A fascinating recent German study demonstrated the efficacy of chamomile on the healing of wounds caused by tattooing. A common problem with tattoos is a ‘weeping’ wound where the skin has been abraded. The healing and drying process was compared between patients that were treated with Chamomile & a similar group that were not. The decrease of the weeping wound area as well as the speed of drying was dramatically improved using Chamomile.

Clinical and laboratory research demonstrates statistically what the herbalist knows experientially, that it will reduce inflammation, colic pain and protect against ulcer formation in the whole of the digestive tract.  The German Commission E Monographs, a therapeutic guide to herbal medicine, approve Chamaemelum nobile for coughs and bronchitis, fevers and colds, inflammations of the skin, inflammation of the mouth and pharynx, tendency to infection – improve immunity, wounds and burns

Dosage and Preparation of Chamomile:

The herb may be used in all the ways plants can be prepared as medicines. Used fresh or dried it should be infused to make the tea. The tincture is an excellent way of ensuring all the plants components are extracted and available for the body. In aromatherapy the essential oil of Chamomile is a valued preparation.

Love, healing, and reducing stress.  This magickal herb has many uses. Add to a sachet or spell to increase the chances of its success. Sprinkle an infusion of chamomile around the house to remove hexes, curses and spells. Burn or add to prosperity bags to increase money. Burn as incense for de-stressing, meditation, and restful sleep. Wash hands in an infusion of chamomile for luck before gambling or playing cards. Use in bath magick to attract love. Keep a packet of the herb with lottery tickets for luck.

There is a wealth of information about the whole range of components. However, this does not tell us much about the value and benefits of the herb as used in healing. The activity of the whole plant is always more than the sum of its parts, just as a person is more than the sum of their biochemistry. Herbal medicine treats the unique individual and not just the disease present. Herbs can be very powerful in addressing symptomology, but we limit their potential if we stay at this level. Knowing the chemistry of sesquiterpenes is not the same as knowing Chamomile!

The essential oil is a wonderful blend of many individual oils. In addition to a wonderful aroma, these oils all have anti-inflammatory, anti-spasmodic and anti-microbial activity in the body. When freshly distilled this oil is blue due to the presence of azulene. Some of the other components of the oil include a-bisabolol, chamazulene, farnesene and herniarin.

Following much pharmacological research, the a-bisabolol has been credited with the ulcer-protective properties of the herb and chamazulene as the main anti-inflammatory. It has been suggested that there is a stimulation of local prostaglandin synthesis, thus strengthening the protective mucosal barrier against ulceration. Azulene imparts the deep blue colour to the essential oil.

Important flavonoids have been found that include quercimeritin, which is involved in the reduction of capillary fragility. Other relevant constituents are anthemic acid, anthemidine, tannin and matricarin.