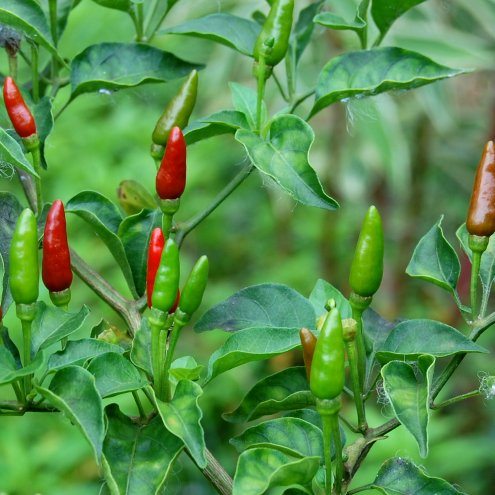 Although no reports have been seen for this species: Cayenne, many plants in this family produce toxins in their leaves. The sap of the plant can cause the skin to blister. Avoid in patients taking mono-amine oxidase inhibitor antidepressants and anti-hypertensive drugs.

Capsicum frutescens is a PERENNIAL growing to 1 m (3ft 3in) by 0.6 m (2ft).
It is hardy to zone 9 and is frost tender. It is in flower from Aug to September. The flowers are hermaphrodite (have both male and female organs)

Cayenne requires a very warm sunny position and a fertile well-drained soil. Tolerates a pH in the range 4.3 to 8.3. This species is a frost-tender perennial that is usually cultivated as an annual. It does not commonly do well outdoors in an average British summer and it is usually grown in a greenhouse in this country. However, if a very warm sheltered position outdoors is chosen then reasonable crops could be obtained in good summers. Widely grown throughout the world, but especially in warm temperate to tropical climates for its edible fruit, tabasco peppers. There are many named varieties.

The growing plant is a good companion for aubergines.

Seed – sow late winter to early spring in a warm greenhouse. The seed usually germinates in 3 – 4 weeks at 20°c. Prick out the seedlings into individual pots of reasonably rich soil and grow them on fast. If trying them outdoors, then plant them out after the last expected frosts and give them the protection of a cloche or frame at least until they are established and growing away well.

Collection: The fruit should be harvested when fully ripe and dried in the shade.

Seed – dried, ground and used as a pepper.

Leaves – cooked as a potherb. Some caution is advised, see note at top of the page.

Indications: Cayenne is the most useful of the systemic stimulants. It stimulates blood flow, strengthening the heart, arteries, capillaries and nerves. A general tonic, it is also specific for both circulatory and digestive system. It may be used in flatulent dyspepsia and colic. If there is insufficient peripheral circulation, leading to cold hands and feet and possibly chilblains, Cayenne may be used, also for debility and for warding off colds. Externally it is used as a rubefacient in problems like lumbago and rheumatic pains. As an ointment it helps unbroken chilblains, as long as it is used in moderation! It is uses as a gargle in laryngitis. It can be used as an antispetic wash.

These pungent fruited peppers are important in the tropics as gastrointestinal detoxifiers and food preservatives. The fruits contain 0.1 – 1.5% capsaicin. This substance stimulates the circulation and alters temperature regulation. Applied to the skin it desensitizes nerve endings and so has been used as a local anaesthetic. The seed contains capsicidins. These are thought to have antibiotic properties. The German Commission E Monographs, a therapeutic guide to herbal medicine, approve Capsicum for muscular tension, rheumatism

King’s Dispensatory describes it thus: Capsicum is a pure, energetic, permanent stimulant, producing in large doses vomiting, purging, pains in the stomach and bowels, heat and inflammation of the stomach, giddiness, a species of intoxication and an enfeebled condition of the nervous power. The infusion is much used in colds, catarrh, hoarseness, etc. In atonic dyspepsia and catarrhal gastritis it stimulates the nerves of the stomach, promotes the secretion of the digestive juices, and assists peristaltic motion. As an internal remedy some have advanced the theory that it is destroyed during digestion. Perhaps, when ingested with food, this may be partially true, but, if so, how do we account for its remarkable activity in sustaining the nervous system when given in delirium tremens and the power it has in steadying the patient and promoting sound sleep? That its effects are partly due to its stimulating action upon the gastric membranes is unquestionable, but its entire effects can not be due to this cause alone. The same may be said of its action in congestive intermittent and remittent fevers. Some thought to attribute its action in congestive chill to its effect upon the solar plexus. It forms an excellent addition to quinine in intermittents, where there is a deficiency of gastric susceptibility and it has been asserted that but 1/2 the quinine will be needed when combined with Capsicum.

Capsicum meets the debility of young and old, but is particularly useful in the elderly, when the body-heat is low, vitality depressed and reaction sluggish. Tired, painful muscles, stiffened joints and relaxation of any part are common conditions in the elderly that are, in a measure, rectified by Capsicum. Homeopathists suggest its use in pneumonia when abscesses threaten. Flatulence in dyspeptic states may be dispelled by capsicum.

Externally, the infusion and tincture have been found valuable as a stimulating gargle in the ulcerated throat of scarlatina; also as a counter-irritant, as an application to indolent ulcers, in chronic ophthalmia and in chronic or indolent ulceration of the cornea. If usedearly in tonsillitis, with relaxation, it may abort the trouble, but ifit does not, its use should be discontinued until the active inflammation has subsided. Hoarseness, from atony of the vocal cords, is relieved by it, and it is a remedy for relaxed uvula. It enters into various tinctures and linaments. The concentrated tincture of capsicum has been highly recommended in the treatment of chilblains and toothache. In the former, a piece of sponge of flannel must be saturated with it, and rubbed well over the seat of the chilblain, until a strong tingling and electrical feeling is produced.This application should be continued daily, until the disease is removed; relief will be experienced on the very first application and frequently there will be a total removal of the disease after the second or third application. This, however, will depend upon the severity of the case.

Powdered Capsicum, sprinkled inside the stockings, was a favorite prescription with Prof. Scudder for cold feet. This medicine possesses an extraordinary power in removing congestion by its action upon the nerves and circulation; if the skin is not broken.

As a gargle in laryngitis it combines well with Myrrh. This combination is also a good antiseptic wash.

Infusion: pour a cup of boiling water onto 1/2-1 teaspoonful of Cayenne and leave to infuse for 10 minutes. A tablespoonful of this infusion should be mixed with hot water and drunk when needed.

Tincture: take 0.25-1 ml of the tincture three times a day or when needed.

Courage, banishing negative vibrations. Burn to rid home or office of bad vibrations. Carry to ward off petty jealousy against you or aid in providing courage to face difficult situations.

Citations from the Medline database for the genus Capsicum

Z Allgemeinmed 1973 Oct 31;49(30):1456-60 (Published in German)Glatzel H Hackenberg K [Radiologic studies on the effect of capsicum spice and mustard on the motility and secretion of the digestive tract]

J Gastroenterol Hepatol 1992 Jan-Feb;7(1):52-6Hot peppers and substance P [editorial]Lancet 1983 May 28;1(8335):1198Jancso N Jancso-Gabor A Szolcsanyi J Direct evidence for neurogenic inflammation and its prevention bydenervation and by pretreatment with capsaicin.