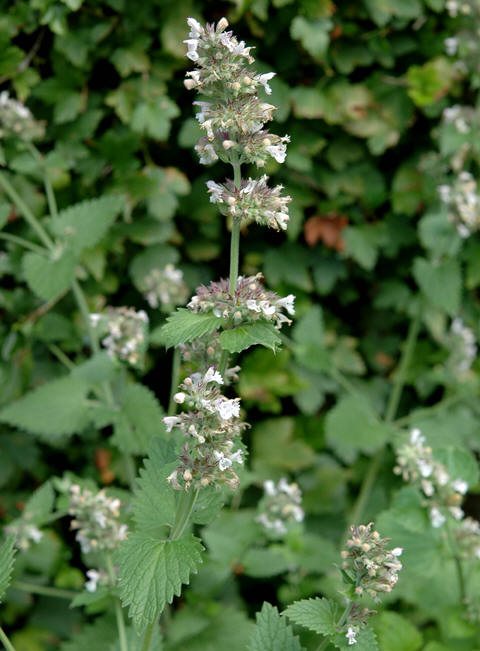 Catnip has diuretic properties and may increase amount and frequency of urination. Smoking catnip can produce euphoria and visual hallucinations. Sedation. Women with inflammatory diseases of the pelvis or are pregnant should not use. Care if using and driving or using machines.

Habitat: A common European herb, cultivated in Britain and the USA.

Nepeta cataria is a PERENNIAL growing to 1 m (3ft 3in) by 0.6 m (2ft).
It is hardy to zone 3 and is not frost tender. It is in flower from Jul to November, and the seeds ripen from Sept to October. The flowers are hermaphrodite (have both male and female organs) and are pollinated by Bees.It is noted for attracting wildlife.

Suitable for: light (sandy) and medium (loamy) soils and prefers well-drained soil. Suitable pH: acid, neutral and basic (alkaline) soils and can grow in very alkaline soils.
It cannot grow in the shade. It prefers dry or moist soil.

Easily grown in a light sandy soil in a sunny position. Succeeds in heavier soils if the drainage is very good. Plants are hardy to about -25°c. Catmint emits a scent that is irresistible to many cats, who will then avidly attack the plant. The smell is said to be similar to certain cat hormones and is more effective with male cats. Quite often a cat will completely destroy even a fairly large plant, small plants especially might need protection until well established. Sometimes grown in the herb garden, there are some named varieties. ‘Citriodora’ has lemon-scented leaves that are more attractive to people and less attractive to cats. If the plants are cut back hard when they are flowering a second crop of leaves will be produced. Members of this genus are rarely if ever troubled by browsing deer or rabbits. Catmint is a good companion plant to grow in the garden. It is said to repel various cabbage pests, aphis (including peach aphis), flea beetles, cucumber beetles, squash bugs and ants from plants they grow near to. The flowers are very attractive to bees.

Seed – best sown as soon as it is ripe in a cold frame in the autumn. The germination of spring sown seed can be erratic, it is best sown in a cold frame. Prick out the seedlings into individual pots when they are large enough to handle and plant them out into their permanent positions in the summer. The seed remains viable for about 5 years. A fast-growing plant, the seedlings can reach flowering size in their first year. If you have sufficient freshly ripe seed then it is well worth trying a sowing outdoors in situ in the autumn. Division in spring or autumn. Very easy, large divisions can be planted out direct into their permanent positions. We have found that it is better to pot up the smaller divisions and grow them on in light shade in a cold frame until they are well established before planting them out in late spring or early summer. Basal cuttings in late spring or early summer. Harvest the shoots with plenty of underground stem when they are about 8 – 10cm above the ground. Pot them up into individual pots and keep them in light shade in a cold frame or greenhouse until they are rooting well. Plant them out in the summer.

Collection: The leaves and flowering tops are collected between June and September.

Young leaves – raw. A mint-like flavour, they make an aromatic flavouring in salads. Older leaves are used as a flavouring in cooked foods. They can be used fresh or dried to make an aromatic herb tea. The tea should be infused in a closed container in order to preserve the essential oils, boiling is said to spoil it.

Catnip is one of the traditional cold and flu remedies. It is a useful diaphoretic helpful in any feverish condition, especially acute bronchitis. As a carminative with anti-spasmodic properties, Catmint eases any stomach upsets, dyspepsia, flatulence and colic. It is a perfect remedy for the treatment of diarrhoea in children. Its sedative action on the nerves adds to its generally relaxing properties.

May be used with Boneset, Elder, Yarrow or Cayenne in colds.

Infusion: pour a cup of boiling water onto 2 teaspoonfuls of the dried herb and leave to infuse for 10-15 minutes. This should be drunk three times a day.

The plant is said to deter insects such as ants and flea beetles as well as rats and mice. (The idea behind it being a rat repellent is probably based on the plants attraction to cats, see notes above.) A strong infusion can be used to repel fleas from carpets or the fur of animals. An extract from the leaves (called nepetalactone) has herbicidal and insect repellent properties. The freshly harvested flowering tops contain 0.3 – 1% essential oil by distillation. It is mainly used for medicinal purposes. The dried leaves retain their fragrance and can be used in pot-pourri.

Sacred to Bast; should be used in any ritual involving cats or cat deities. Use with rose petals in love sachets. Use in sachets and spells designed to enhance beauty or happiness. Provides protection while sleeping. Mix with Dragon’s Blood to rid oneself of a behavioral problem or bad habit. Burn dried leaves for love magick. Grow near the home or hang over the door to attract good spirits and luck.

Citations from the Medline database for the genus Nepeta