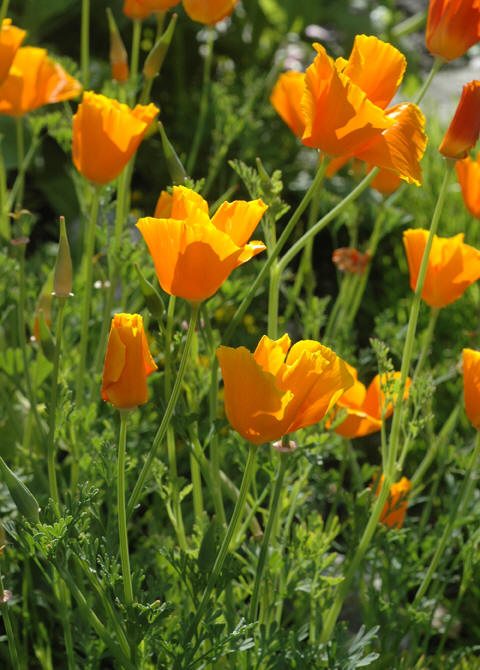 No records of toxicity have been seen but this species, the Californian Poppy belongs to a family that contains many poisonous plants. Some caution is therefore advised.

Eschscholzia californica is a PERENNIAL growing to 0.3 m (1ft) by 0.2 m (0ft 8in) at a fast rate. It is hardy to zone 6. It is in flower from Jul to September, and the seeds ripen from Aug to September. The flowers are hermaphrodite (have both male and female organs) and are pollinated by Bees.It is noted for attracting wildlife. Californian Poppy is suitable for: light (sandy), medium (loamy) and heavy (clay) soils, prefers well-drained soil and can grow in nutritionally poor soil. Suitable pH: acid, neutral and basic (alkaline) soils. It cannot grow in the shade. It prefers dry or moist soil. The plant can tolerate maritime exposure.

The Californian Poppy prefers a poor sandy soil and a sunny position but is easily grown in an ordinary garden soil. Succeeds in a hot dry position. Plants grow well in maritime climates. A very ornamental plant, it is commonly grown in the flower garden and there are many named varieties. This plant is the state flower of California. Although a perennial it is usually quite short-lived and is more often grown as an annual in this country. It can tolerate temperatures down to about -10°c, however, and often survives mild winters. If the dead flowers are removed before they set seed the plant will continue flowering for a longer period. A polymorphic species. Plants resent root disturbance and should be sown in situ. The flowers are very attractive to bees. They close during wet or overcast weather. Plants often self-sow if the soil is disturbed by some means such as hoeing.

Seed – sow Californian Poppy in mid spring or late summer to early autumn in a sunny border outdoors and only just cover the seed. Autumn sown plants may require protection from frosts in cold winters. The seed usually germinates in 2 – 3 weeks.

Edible Parts: Leaves. Edible Uses: Leaves – cooked. This plant is in a family that contains many poisonous plants so some caution is advised in using it.

Californian Poppy has the reputation of being a non-addictive alternative to the Opium Poppy, though it is less powerful. It has been used as a sedative and hypnotic for children, where there is over-excitability and sleeplessness. It can be used wherever an anti-spasmodic remedy is required. Good for headaches.

The Californian poppy is a bitter sedative herb that acts as a diuretic, relieves pain, relaxes spasms and promotes perspiration. The whole plant is harvested when in flower and dried for use in tinctures and infusions. It is taken internally in the treatment of nervous tension, anxiety, insomnia and incontinence (especially in children). The watery sap is mildly narcotic and has been used to relieve toothache. It is similar in its effect to the opium poppy (Papaver somniferum) but is much milder in its action and does not depress the central nervous system. Another report says that it has a markedly different effect upon the central nervous system, that it is not a narcotic but tends to normalize psychological function. Its gently antispasmodic, sedative and analgesic actions make it a valuable herbal medicine for treating physical and psychological problems in children. It may also prove beneficial in attempts to overcome bed-wetting, difficulty in sleeping and nervous tension and anxiety. An extract of the root is used as a wash on the breasts to suppress the flow of milk in lactating females.

Infusion: pour a cup of boiling water onto 1-2 teaspoonfuls of the dried Californian Poppy herb and leave to infuse for 10 minutes. A cup should be drunk at night to promote restful sleep. Tincture: take 1-4 ml of the tincture at night.