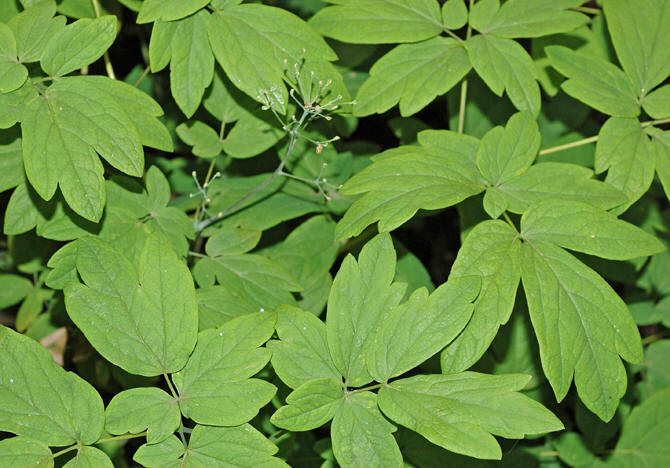 Caulophyllum thalictroides is a PERENNIAL herb growing to 0.5 m (1ft 8in) by 1 m (3ft 3in). It is in flower in April, and the seeds ripen in September. The flowers are hermaphrodite (have both male and female organs). From the single stalk rising from the ground, there is a single, large, three-branched leaf plus a fruiting stalk. The bluish-green leaflets are tulip-shaped, entire at the base, but serrate at the tip. Its species name, thalictroides, comes from the similarity between the large highly divided, multiple-compound leaves of Meadow-rue (Thalictrum) and those of Blue Cohosh.

Cultivation of Blue Cohosh:
Easily grown in a damp light humus-rich woodland soil preferring a position in deep shade. One report says that it is best in a peat garden. Plants are hardy to at least -20°c. The plant only produces one large leaf each year. The seeds rupture the ovary before they are fully ripe and continue to expand naked, they are bright blue when fully ripe.

Seed – best sown as soon as it is ripe in a shady part of a cold frame. If stored seed is used, it should be sown as soon as it is received. Germination can be erratic. Prick out the seedlings as soon as they are large enough to handle and grow them on in a shady part of a greenhouse or cold frame for at least their first winter. Plant them out into their permanent positions during autumn or early winter. Division in spring or just after flowering. Plants are slow to increase.

The roots and rhizome are collected in the autumn, as at the end of the growing season they are richest in natural chemicals.

The roasted seed is a coffee substitute. The seeds are about the size of large peas, but are not produced in abundance.

Please note this should be avoided during pregnancy unless to prevent miscarriage under the guidance of a qualified practitioner.

An excellent uterine tonic that may be used in any situation where there is a weakness or loss of tone. It may be used at any time during pregnancy if there is a threat of miscarriage. Similarly, because of its anti-spasmodic action, it will ease false labour pains and dysmenorrhoea. However, when labour does ensue, the use of Blue Cohosh just before birth will help ensure an easy delivery. In all these cases it is a safe herb to use. As an emmenagogue it can be used to bring on a delayed or suppressed menstruation whilst ensuring that the pain that sometimes accompanies it is relieved. Blue Cohosh may be used in cases where an anti-spasmodic is needed such as in colic, asthma or nervous coughs. It has a reputation for easing rheumatic pain. This really is a woman’s herb!!!

Priest & Priest tell us that it is a “gently diffusive stimulating relaxant, uterine vaso-dilator and anti-spasmodic in all spastic and irritable states. Indicated for a tonic conditions and for deficient contractions in parturition. Cerebrospinal tropho restorative.” They give the following specific indications : metritis, endometriosis, ovaritis, dysmenorrhoea, urethritis, vaginitis, thrush, restlessness during pregnancy, menopausal pains anddiscomfort.

King’s says that “as a powerful emmenagogue it promotes delivery, menstruation, and dropsical discharges, ” and that “it was employed by the Indians and their imitators for rheumatism, dropsy, colic, sore throat, cramp, hiccough, epilepsy, hysterics, inflammation of the uterus, etc. “King first employed Blue Cohosh for “its beneficial influence on abnormities of the mucous tissues, using it for aphthous stomatitis in decoction, alone or combined with Hydrastis. Blue Cohosh is reputed antispasmodic, emmenagogue, and parturifacient, besides being diuretic, diaphoretic, and expectorant. Its use as a parturient originated in the custom of the Indian squaws (note 19 th. usage, not mine! D.L.H.) of employing a decoction of the root for 2 or 3 weeks previous to labor to facilitate child-birth. There is no doubt but that Caulophyllum has a decided action upon the gravid uterus. During labor it relieves false pains and coordinates muscular contractions, at the same time increasing their power. Like Cimicifuga, it is a better oxytocic than ergot. Unlike the latter agent it stimulates normal contraction instead of inducing spasmodic uterine action. It is most valuable in those cases where delay is due to debility, fatigue, or lack of uterine nervous energy, and for deficient contractions where the tissues feel full, as if congested. As a partus praeparatorCaulophylum has enjoyed a well merited reputation. When used by delicate women, or those who experience prolonged and painful labors, for several weeks previous to confinement, it gives tone and vigor to all the parts engaged in the accouchement, facilitating its progress, and relieving much suffering. It is a good remedy for after pains, especially when spasmodic in character. Caulophylum acts as an antiabortive by relieving the irritation upon which the trouble depends. King states that for this purpose it is fully equal to Viburnum.

As a gynecian remedy it has been employed to relieve irritation of the reproductive organs as if dependent on congestion. It controls chronic inflammatory states of these organs and gives tone in cases of debility. In the sexual disorders of the female it is indicated by tenderness and pain in the uterus, in debilitated patients. It has been very successfully used in cases of hysteria to overcome the attack, and to relieveovarian, or mammary pain, or irritation when accompanying that disorder. Chronic corporeal, or cervical endometritis, metritis, ovaritis, ovaralgia, uterine leucorrhoea, amenorrhcea, and dysmenorrhoea, are conditions in which it has been most successfully employed. It has an established reputation as a remedy for rheumatism of the uterus, with nervous excitement, for uterinecramps attending menstruation, and for menorrhagia, depending on uterine subinvolution.

As an antispasmodic it has been employed in chorea and epilepsy due to diseased states of the sexual organs, but with varying results. It is better suited for spasmodic intestinal affections, flatulent and spasmodic colic, and cramps. By lessening irritation it has been serviceable in cystitis, urethritis, chronic nephritis, and albuminuria. Spasmodic retention of urine is relieved by it. It is a good remedy for some cases of rheumatism, though not so valuable asCimicifuga.”

Cook say’s that “It is a moderate diffusive, stimulating and relaxing in about equal degrees, spending its main powers upon the nervous system. These qualities make it one of the very best of antispasmodics, to relieve nervous feebleness with irritability, as in crampings of the bowels, twitching of the muscles in typhoid and parturient cases, hysteria, painful menstruation, colic, etc. Its efficacy in these cases is remarkable; and it is also a valuable adjunct to other suitable agents in the treatment of puerperal convulsions, epilepsy, and chorea.It enjoys deserved reputation in neuralgic forms of rheumatism, especially that form which passes with some as chronic inflammation of the womb. It sustains the nervous system, but at the same time soothes it; and is of especial service in strengthening and relieving painful functional difficulties of the female generative organs.

It is one of the most valuable of all parturients, when the uterine action is becoming weary; in which case it may be combined with the Composition Powder; or with Cypripedium and a very little Capsicum (or Bayberry)added when depression is considerable.

It promotes diuresis apparently by sustaining the pelvic nerves; and in the same way strengthens the uterus in leucorrhea and insufficient menstruation; yet can not properly be classed as either a diuretic o remmenagogue. By the same kind of action, at is useful in weak kidneys, albuminous urine, chronic difficulties of the prostate, nervous restlessness during pregnancy, and previous to parturition to give tone and comfort to the uterus. For these several purposes, it is generally combined with other suitable agents, such as Aralia racemosa, Mitchella, uva ursi, Convalaria, Liriodendron, etc.”

To strengthen the uterus it may be used with False Unicorn, Motherwort and/or Yarrow. To increase its anti-spasmodic effects combine with Scullcap and/or Black Cohosh.

Decoction: put l teaspoonful of the dried root in a cup of water, bring to the boil and simmer for l0 minutes. This should be drunk three times a day.

Tincture: take 0.5-2ml of the tincture three times a day.

None known but if you know of one please let us know!

Citations from the Medline database for the genus Caulophylum

Antibiotiki (1972 Sep) 17(9):834-7Chandrasekhar K Sarma GH Proceedings: Observations on the effect of low and high doses of Caulophyllum on the ovaries and the consequential changes in the uterus and thyroid in rats.

J Reprod Fertil (1974 May) 38(1):236-7Chandrasekhar K Vishwanath CR Proceedings: Studies on the effect of Caulophyllum on implantation in rats.