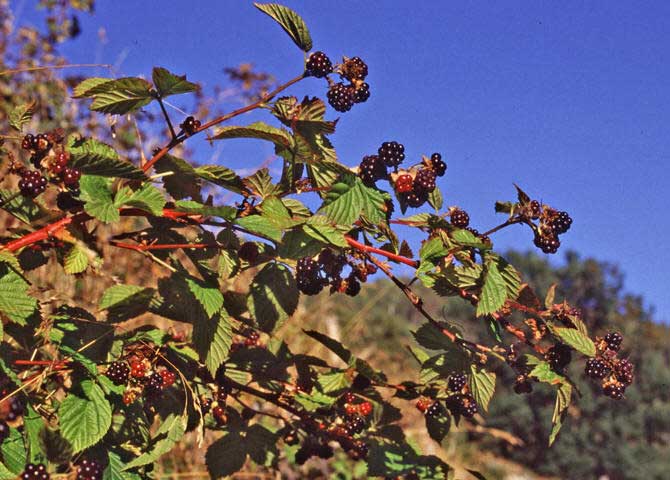 Blackberry is a well known hedgerow plant in the UK, and it has been used for years as a medicinal herb having a reputation for relieving stomach upsets. It is a valuable herb for all aspects of life it’s fruits are widely sort after for culinary purposes not only for their high antioxidant qualities but because of their delicious taste.

Habitat: In Australia, the Blackberry grows more luxuriantly than in any other part of the world, though it is common everywhere. Found in hedgerows, woodland, meadows, waste ground etc. throughout the UK.

Rubus fruticosus; Blackberry, is a deciduous Shrub growing to 3 m (9ft) by 3 m (9ft) at a fast rate.
It is hardy to zone 6 and is not frost tender. It is in leaf 11-Mar It is in flower from May to September, and the seeds ripen from Jul to October. The flowers are hermaphrodite (have both male and female organs) and are pollinated by Insects, Apomictic.The plant is self-fertile.
It is noted for attracting wildlife. Suitable for: light (sandy), medium (loamy) and heavy (clay) soils, prefers well-drained soil and can grow in nutritionally poor soil. Suitable pH: acid, neutral and basic (alkaline) soils and can grow in very acid and very alkaline soils.

It can grow in full shade (deep woodland) semi-shade (light woodland) or no shade. It prefers moist soil and can tolerate drought. The plant can tolerates strong winds but not maritime exposure.

Easily grown in a good well-drained loamy soil. Succeeds in acid and calcareous soils. Tolerates poor soils. Established plants are drought resistant. Succeeds in sun or semi-shade, though it fruits less well in the shade. Plants will also fruit when grown in fairly deep shade or against a north facing wall, though the fruit will ripen later. Plants tolerate quite severe exposure. Hardy to at least -18°c. R. fruticosus is an aggregate species made up of several hundred slightly differing species. The reason for this is that most seed is produced by a non-sexual method (Apomixis) and is therefore genetically identical to the parent plant. On occasions when sexual production of seed takes place the offspring will all be slightly different from the parent plant and will then usually reproduce as a new species by means of apomixy. Modern treatment of this aggregate usually does not use the name R. fruticosus because of the confusion over which species it should apply to, the type species of the aggregate should be called R. ulmifolius. The following members of the aggregate have been highly recommended for their fruit. R. badius. R. cyclophorus. R. gratus. R. nemoralis. R. oxyanchus. R. pyramidalis. R. separinus. R. winteri. The following members are said to be nearly as good. R. balfourianus. R. broensis. R. carpinifolius. R. foliosus. R. fuscoviridis. R. infestus. R. insericatus newbouldianus. R. koehleri. R. largificus. R. londinensis. R. ludensis. R. macrophyllus. R. obscurus. R. pseudo-bifrons. R. rhombifolius. R. riddelsdellii. R. scaber. R. thyrsiflorus. R. vallisparsus. R. vestitus. Plants form dense thickets and this makes excellent cover for birds. They regenerate freely after being cut back. This species is also a good plant for bees and butterflies. This species has biennial stems, it produces a number of new stems each year from the perennial rootstock, these stems fruit in their second year and then die. Plants in this genus are notably susceptible to honey fungus.

Seed – requires stratification and is best sown in early autumn in a cold frame. Stored seed requires one month stratification at about 3°C and is best sown as early as possible in the year. Prick out the seedlings when they are large enough to handle and grow on in a cold frame. Plant them out into their permanent positions in late spring of the following year. Cuttings of half-ripe wood, July/August in a frame. Tip layering in July. Plant out in autumn. Division in early spring or just before leaf-fall in the autumn.

Autumn for roots, bark and leaves during the spring for eating as a salad.

Fruit – raw or cooked. The best forms have delicious fruits and, with a range of types, it is possible to obtain ripe fruits from late July to November. The fruit is also made into syrups, jams and other preserves. Some people find that if they eat the fruit before it is very ripe and quite soft then it can give them stomach upsets. Root – cooked. The root should be neither to young nor too old and requires a lot of boiling. A tea is made from the dried leaves – the young leaves are best. The leaves are often used in herbal tea blends. Young shoots – raw. They are harvested as they emerge through the ground in the spring, peeled and then eaten in salads.

Part Used: The bark of the root and rhizome

An excellent, safe and gentle astringent remedy that can be used in all situations that call for this action. It may be used in diarrhoea, dysentery and other problems associated with ‘loose bowels’. It was traditionally used in Britain externally as wash in a whole range of skin eruptions and burns. It will staunch bleeding and may be used in leucorrhoea.

Ellingwood considered it specific for “diarrhoeas of infancy.”

King’s Dispensatory describes it thus: These plants are useful as astringents. An infusion or decoction of the leaves of raspberry or the bark of the roots of the other two (species of Rubus), has been found an excellent remedy in diarrhoea, dysentery (chronic), cholera infantum, relaxed conditions of the intestines of children, passive haemorrhage from the stomach, bowels or uterus and in colliquative diarrhoea. The decoction, used as an injection, is useful in gonorrhoea, gleet, leucorrhoea and prolapsus uteri and ani. In prolapsus uteri, it may be used wither alone or combined with the internal use of a decoction of equal parts of Black Cohosh and Blackberry roots, taken freely. Rubus villosus is especially adapted to children’s diarrhoea’s, the stools being copious, watery and clay-coloured. Such children are pale, fretful, without appetite, there is deficient glandular activity and the gastro-intestinal tract shows evidence of enfeeblement and relaxation. The leaves of Raspberry in decoction with cream, will allay nausea and vomiting and combined with aromatics, have been found useful in diarrhoea, cholera morbus, and cholera infantum. It is said that raspberry will during labour, increase the activity of the uterine contractions when these are feeble, even in instances where ergot has failed and that it has been found serviceable in after-pains. The fruit, especially that of the blackberry, makes excellent syrup, which is of much service in dysentery, being pleasant to the taste, mitigating the accompanying tenesmus and sufferings of the patient, and ultimately effecting a cure. The fruit of the raspberry contains very little nourishment, but is an agreeable acidulous article, rarely disturbing the stomach and when eaten freely, promotes the action of the bowels. Raspberry syrup, added to water, forms a refreshing and beneficial beverage for fever patients and during convalescence. The jelly or jam may likewise be used in similar cases; that of the blackberry being more astringent is better adapted to cases of diarrhoea, dysentery and cholera infantum. Dose of the decoction of these plants, from 1 to 4 fluid ounces, several times a day; of the pulverized root-bark, 20 to 30 grains. Specific Indications and Uses: Gastro-intestinal atony with copious, water and palealvine discharges.

Decoction:1-2 g of the bark in a decoction three times a day.

With chamomile for childhood loose bowels.

Other uses of Blackberry:

A purple to dull blue dye is obtained from the fruit. A fibre is obtained from the stem and used to make twine. Plants are spread by seed deposited in the droppings of birds and mammals. They often spring up in burnt-over, logged or abandoned land and make an excellent pioneer species, creating the right conditions for woodland trees to move in. The trees will often grow in the middle of a clump of blackberries, the prickly stems protecting them from rabbits.

Healing, Money, Protection. Bake blackberry pies at Lammas. Use leaves and berries in spells of wealth. Dry fruit and powder it for use in magickal healing potions. Weave pentagrams from the brambles to hang in the home for protection.

As is the case with most herbs there is still more research being done on Blackberry and it’s uses we will keep you informed of any developments.