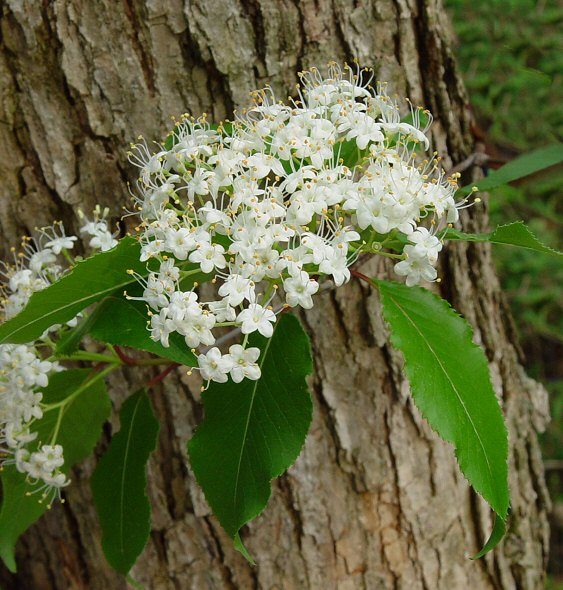 Viburnum prunifolium, Black Haw is a deciduous Tree growing to 7.5 m (24ft) by 5 m (16ft).
It is hardy to zone 3. It is in flower in June, and the seeds ripen in October. The flowers are hermaphrodite (have both male and female organs) and are pollinated by Insects.The plant is not self-fertile.

Suitable for: light (sandy), medium (loamy) and heavy (clay) soils and can grow in nutritionally poor soil. Suitable pH: acid, neutral and basic (alkaline) soils. It can grow in semi-shade (light woodland) or no shade. It prefers dry or moist soil.

Black Haw is an easily grown plant, succeeding in most soils. Unlike other members of the genus, this species grows well on poor soils and in dry situations. Prefers a deep rich loamy soil in sun or semi-shade. Best if given shade from the early morning sun in spring. A very hardy plant, tolerating temperatures down to about -40°c. Plants are self-incompatible and need to grow close to a genetically distinct plant in the same species in order to produce fruit and fertile seed.

Seed – best sown in a cold frame as soon as it is ripe. Germination can be slow, sometimes taking more than 18 months. If the seed is harvested ‘green’ (when it has fully developed but before it has fully ripened) and sown immediately in a cold frame, it should germinate in the spring. Stored seed will require 2 months warm then 3 months cold stratification and can still take 18 months to germinate. Prick out the seedlings into individual pots when they are large enough to handle and grow them on in a cold frame or greenhouse. Plant out into their permanent positions in late spring or early summer of the following year. Cuttings of soft-wood, early summer in a frame. Pot up into individual pots once they start to root and plant them out in late spring or early summer of the following year. Cuttings of half-ripe wood, 5 – 8 cm long with a heel if possible, July/August in a frame. Plant them into individual pots as soon as they start to root. These cuttings can be difficult to overwinter, it is best to keep them in a greenhouse or cold frame until the following spring before planting them out. Cuttings of mature wood, winter in a frame. They should root in early spring – pot them up when large enough to handle and plant them out in the summer if sufficient new growth is made, otherwise keep them in a cold frame for the next winter and then plant them out in the spring. Layering of current seasons growth in July/August. Takes 15 months.

Fruit – raw or cooked. A thin dry flesh with a sweet taste. The fruit is somewhat variable in size and quality, the best forms are nice raw whilst others are used for making preserves etc. The taste is best after a frost. The ovoid fruit is about 17mm long and contains a single large seed

Black Haw has a very similar use to Cramp Bark, to which it is closely related. It is a powerful relaxant of the uterus and is used for dysmenorrhoea, false labour pains as well as in threatened miscarriage. Its relaxant and sedative actions explain its power in reducing blood pressure in hypertension, which happens through are laxation of the peripheral blood vessels. It may be used as an anti-spasmodicin the treatment of asthma.

King’s describes this herb thus “That it has a decided affinity for the female reproductive organs is well established. Decoctions of the drug were formerly used as a gargle in apthae, as a wash in indolent ulcers, and in various ophthalmic disorders. By its astringency it has proved of value in diarrhoea and dysentery. It has been recommended in jaundice, but we have a better agent in Chionanthus. Palpitation of the heart is said to have been relieved by it. Its principal use at the present day is in disorders of the female organs of reproduction. As a uterine tonic it is unquestionably of great utility. In the hyperasthetic, or irritable condition of the uterus incident to highly nervous women, or as the result of overwork, it will be found an admirable agent. In dysmenorrhoea, with deficient menses, uterine colic, and in those cases where there are severe lumbar and bearing-down pains, it will prove an efficient drug. It is specifically indicated in cramp-like menstrual pains, pains decidedly expulsive and intermittent in character and in the various painful contractions of the pelvic muscles, so common to disorders of women. Uterine congestion and chronic uterine inflammation are often greatly relieved by Black Haw. It acts promptly in spasmodic dysmenorrhoea. especially with excessive flow. It is a good remedy for uterine hemorrhage attending the menopause. In amenorrhoea in pale, bloodless subjects, the menses are restored by it. Cramps of limbs attending pregnancy yield to both black haw and cramp bark. It is considered almost specific for cramp in the legs, not dependent on pregnancy, especially when occurring at night. The condition for which black haw is most valued is that of threatened abortion. It is the most prompt drug in the materia medica to check abortion, provided the membranes have not ruptured. In all cases of habitual abortion it should be given in small doses for a considerable length of time. The abundant testimony as to its value in this condition alone gives it a high place among drugs. By its quieting effects upon the irritable womb, women who have previously been unable to go to full term have been aided by this drug to pass through the pregnancy without mishaps which would otherwise have proven disastrous to both child and mother. It has been used to control postpartum hemorrhage, but is less effective than ergot and cinnamon. It assists in reducing the size of the womb in subinvolution of that organ. Viburnum is of some value innervous disorders, and has been advised in chorea, hysteria, hystero-epilepsy, petit mal, and paralysis agitans. It is of service only when these troubles are associated with menstrual wrongs. Viburnum opulus resembles this agent very closely in its effects, and may be used in the above-named conditions, for which the black haw is useful.

Decoction: put 2 teaspoonfuls of the dried bark in a cup of water, bring to the boil and simmer for 10 minutes. This should be drunk three times a day.

Tincture: take 5-10 ml of the tincture three times a day.

Plants can be grown as a hedge, they can be sheared to make a formal screen. Wood – heavy, hard, strong, brittle, close grained. It weighs 52lb per cubic foot, but is of no commercial importance due to the small size of the trees.

Protection, gambling, luck, power and employment. Carry in the pocket while seeking employment, if you are having problems at work, or if you are asking for a raise.