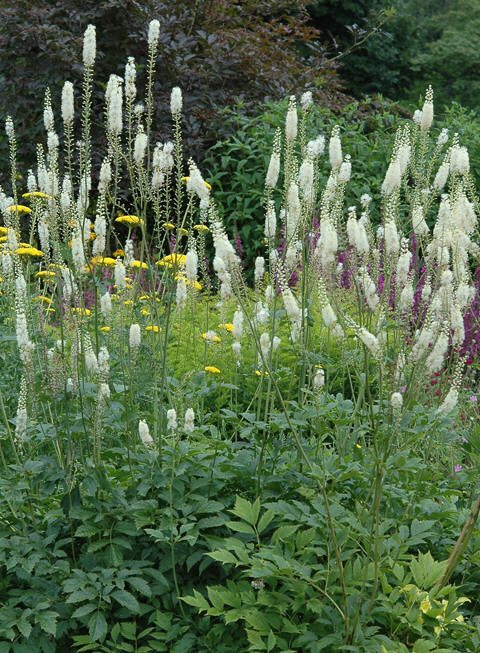 The plant is poisonous in large doses. Large doses irritate nerve centres and may cause abortion. Gastrointestinal disturbances, hypotension, nausea, headaches. Not recommended during pregnancy or while breastfeeding. Do not take concomitantly with iron.

Habitat: USA and Canada. It grows in a variety of woodland habitats, and is often found in small woodland openings.

Black cohosh is a smooth (glabrous) herbaceous perennial plant that produces large, compound leaves from an underground rhizome, reaching a height of 25–60 centimetres (9.8–24 in). The basal leaves are up to 1 metre (3 ft 3 in) long and broad, forming repeated sets of three leaflets (tripinnately compound) having a coarsely toothed (serrated) margin. The flowers are produced in late spring and early summer on a tall stem, 75–250 centimetres (30–98 in) tall, forming racemes up to 50 centimetres (20 in) long. The flowers have no petals or sepals, and consist of tight clusters of 55-110 white, 5–10 mm long stamens surrounding a white stigma. The flowers have a distinctly sweet, fetid smell that attracts flies, gnats, and beetles. The fruit is a dry follicle 5–10 mm long, with one carpel, containing several seeds.

How to cultivate Black Cohosh:

Prefers a moist humus rich soil and some shade. Grows well in dappled shade. Succeeds in ordinary garden soiland tolerates drier soils. Plants are hardy to at least -20°c. A very ornamental species. The flowers have an unusual, slightly unpleasant smell which is thought to repel insects. Plants grow and flower well in Britain, though they seldom if ever ripen their seed. A greedy plant, inhibiting the growth of nearby plants, especially legumes.

How to propagate Black Cohosh:

Seed – best sown as soon as it is ripe in a cold frame. Only just cover the seed. It germinates in 1 – 12 months or even longer at 15°c. The seed does not store well and soon loses its viability, stored seed may germinate better if given 6 – 8 weeks warm stratification at 15°c and then 8 weeks cold stratification. Prick out the young seedlings into individual pots when they are large enough to handle and grow them on in a frame for their first winter. Plant out in late spring or early summer. Division in spring or autumn. Larger clumps can be replanted direct into their permanent positions, though it is best to pot up smaller clumps and grow them on in a cold frame until they are rooting well. Plant them out in the summer or following spring.

The roots are unearthed with the rhizome in autumn after the fruits have ripened. They should be cut lengthwise and dried carefully.

The leaves can be eaten when fresh but don’t overdo it as they can be toxic in large amounts.

Part Used: Root and rhizome; dried, not fresh, as it is toxic when fresh.

Black Cohosh is a most valuable herb that has a powerful action as a relaxant and a normalizer of the female reproductive system. It may be used beneficially in cases of painful or delayed menstruation. Ovarian cramps or cramping pain in the womb will be relieved by black cohosh. Black Cohosh is used to great effect during the menopause. It is very active in the treatment of rheumatic pains, but also in rheumatoid arthritis, osteo-arthritis, in muscular and neurological pain. It finds use in sciatica and neuralgia. As a relaxing nervine it may be used in many situations where such an agent is needed. It has been found beneficial in cases of tinnitus. Because of the wealth of accrued experience, it is worth quoting from Kings American Dispensatory:

Kings “This is a very active, powerful, and useful remedy, and appears to fulfil a great number of indications. It possesses an undoubted influence over the nervous system. In small doses the appetite and digestion are improved, and larger amounts augment the secretions of the gastro-intestinal tract. Excretions from the skin and kidneys are increased by it, the peculiar earthy odour of the drug being imparted to the urine; the secretions of the bronchial mucous surfaces are also augmented under its administration. The heart-beat is slowed and given increased power by it, while arterial tension is elevated.

Upon the reproductive organs it exerts a specific influence, promoting the menstrual discharge, and by its power of increasing contractility of the unstriped fibres of the uterus, it acts as an efficient parturient. The venereal propensity in man is said to be stimulated by Cimicifuga.

Few of our remedies have acquired as great a reputation in the treatment of rheumatism and neuralgia. Indeed, few cases of rheumatism, or conditions depending upon a rheumatic basis, will present, which will not be influenced for the better by Cimicifuga. Rheumatism of the heart, diaphragm, psoasmuscles, “lumbago” “stiff neck” in fact all cases characterized by that kind of pain known as “rheumatic” dull, tensive intermittent, as if dependent upon a contracted state of muscular fibre, soreness in muscular tissue, especially over the abdomen and in the extensor and flexor muscles of the extremities, all yield readily to it.

Muscular pain of a rheumatoid character, when not amounting to a true rheumatic attack, and other rheumatoid pains when acute and not of spinal origin such as gastralgia, enteralgia, tenesmic vesical pains, pleurodynia, pain in the mediastinum orbits or ears, are relieved by Cimicifuga. In diseases of the ear the drug is indicated when the condition is aggravated by rheumatic association, or in neuralgia of the parts with stiffness in the faucial and pharyngeal muscles. In eye strain, giving rise to headache, and associated with a sensation of stiffness in the ocular muscles, or a bruised feeling in the muscles of the frontal region, it will give marked benefit. In doses of 1 fluid drachm of the tincture, repeated every hour, it has effected thorough cures of acute conjunctivitis, without the aid of any local application.

Cimicifuga plays a very important part in the therapeutics of gynaecology. It is a remedy for atony of the reproductive tract. In the painful conditions incident to imperfect menstruation, its remedial action is fully displayed. By its special affinity for the female reproductive organs, it is an efficient agent for the restoration of suppressed menses. It is even a better remedy in that variety of amenorrhoea termed “absentio mesium”. In dysmenorrhea it is surpassed by no other drug, being of greatest utility in irritate and congestive conditions of the uterus and appendages, characterized by tensive, dragging pains, resembling the pains of rheumatism. If the patient be despondent and chilly, combine Cimicifuga with Pulsatilla, especially in anaemic subjects. It is a good remedy for the reflex “side-aches” of the unmarried woman; also for mastitis and mastodynia. It should be remembered in rheumatism of the uterus, and in uterine leucorrhoea, with a flabby condition of the viscous, its effects are decided. When there is a disordered action or lack of functional power in the uterus, giving rise to sterility, Cimicifuga often corrects the impaired condition and cures. Reflex mammary pains during gestation are met by it, and in rheumatic subjects it promptly relieves such ovarian troubles as ovarialgia and neuralgia, the pain being of an aching character. Orchialgia and aching sensations of theprostate are conditions calling for Cimicifuga, and as a tonic it is not without good effects in spermatorrhoea.

Cimicifuga has proved a better agent in obstetrical practice than ergot. It produces natural intermittent uterine contractions, whereas ergot produces constant contractions, thereby endangering the life of the child, or rupture of the uterus. Where the pains are inefficient, feeble, or irregular, Cimicifuga will stimulate to normal action. It is an excellent”partus praeparator” if given for several weeks before confinement. It is a diagnostic agent to differentiate between spurious and true labor pains, the latter being increased, while the former are dissipated under its use. It is the best and safest agent known for the relief of after-pains, and is effectual in allaying the general excitement of the nervous system after labor.

Cimicifuga exerts, a powerful influence over the nervous system, and has long been favorably known as a remedy for chorea. It may be used alone or with Valeriana, equal parts. It is, particularly useful here when associated with amenorrhoea, or when the menstrual function fails to act for the first time. Its action is slow, but its effects, are permanent. It has been used successfully as an antispasmodic in hysteria, epilepsy when due to menstrual failures, asthma and kindred affections, periodical convulsions, nervous excitability, pertussis, delirium tremens and many other spasmodic affections.

For headache, whether congestive or from cold, neuralgia, dysmenorrhoea, or from la grippe, it is promptly curative. As a palliative agent in phthisispulmonalis, good results are obtained, in that it lessens cough, soothes the pain, especially the “aching” under the scapulae, lessens secretions and allays nervous irritability. Fevers, intermittent and remittent have been benefited by it; well-marked antiperiodic and tonic virtues having been observed in the drug. In the exanthemata, it is a valuable agent, controlling pain, especially the terrible “bone aches” of smallpox, rendering the disease much milder. Inscarlatina and measles, it relieves the headache and the backache preceding the eruptions. It is stated that it has been used in the south with some success as a prophylactic against variola. Cimicifuga exerts a tonic influence over both the serous and mucous tissues of the system, and will be found a superior remedy in the majority of chronic diseases of these parts. In all cases where acidity of the stomach is present, this should first be removed, or some mild alkaline preparation be administered in conjunction with the remedy, before any beneficial change will ensue. As a remedy for pain, Cimicifuga is a very prompt agent, often relieving in a few hours, painful conditions that have existed for a long time

“As a partus accelerator, it may be substituted for, and should be preferred to, ergot; 1/2 drachm of the powdered root may be given in warm water every 15 or 20 minutes, until the expulsive action of the uterus is induced, and which it seldom fails to bring on speedily and powerfully. In acute troubles, as acute muscular rheumatism, and in false pains, and as an oxytocic, Webster prefers the strong decoction of the recent root in tablespoonful doses. The fluid extract of black cohosh may be used in all cases where the article is indicated; its dose is from 1/2 fluid drachm to 2 fluid drachms. The ordinary dose for its specific effects is a teaspoonful of a mixture of from 10 drops to 1 drachm of Cimicifuga tincture in 4 ounces of water, the larger or smaller dose being determined by the condition of the patient.”

Decoction: pour a cup of water onto 1/2-1 teaspoonfuls of the dried root and bring to boil. Let it simmer for 10-15 minutes. This should be drunk three times a day.

Black Cohosh Tablets: For menopausal symptoms, the dose of black cohosh used in studies has been 20-40 milligram tablets of a standardized extract taken twice a day. More than 900 milligrams a day of black cohosh is considered an overdose. Directions for taking black cohosh in other forms will vary. Some experts say that no one should take black cohosh for more than six months at a time.

Side Effects of Black Cohosh:

Other uses of the herb:

Both the growing and the dried plant can be used to repel bugs and fleas.

Citations from the Medline database for the genus Cimicifuga