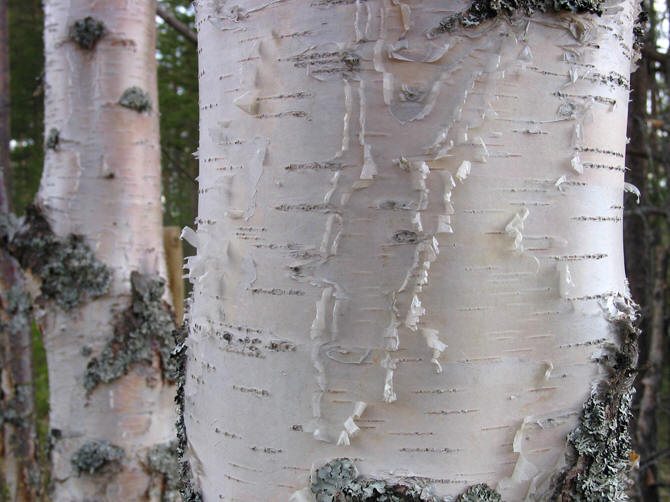 Habitat: Commonly found in woods in Britain and Europe.

Betula alba-Birch, are generally small to medium-sized trees or shrubs, mostly of temperate climates. The simple leaves are alternate, singly or doubly serrate, feather-veined, petiolate and stipulate. They often appear in pairs, but these pairs are really borne on spur-like, two-leaved, lateral branchlets. The fruit is a small samara, although the wings may be obscure in some species. They differ from the alders (Alnus, other genus in the family) in that the female catkins are not woody and disintegrate at maturity, falling apart to release the seeds, unlike the woody, cone-like female alder catkins.

Birch Color: The bark of all birches is characteristically marked with long, horizontal lenticels, and often separates into thin, papery plates, especially upon the paper birch. It is resistant to decay, due to the resinous oil it contains. Its decided colour gives the common names gray, white, black, silver and yellow birch to different species.

The buds form early and are full-grown by midsummer, all are lateral, no terminal bud is formed; the branch is prolonged by the upper lateral bud. The wood of all the species is close-grained with satiny texture, and capable of taking a fine polish; its fuel value is fair.

Birch flowers are monoecious, opening with or before the leaves and borne once fully grown these leaves are usually 3-6 mm long on three-flowered clusters in the axils of the scales of drooping or erect catkins or aments. Staminate aments are pendulous, clustered or solitary in the axils of the last leaves of the branch of the year or near the ends of the short lateral branchlets of the year. They form in early autumn and remain rigid during the winter. The scales of the staminate aments when mature are broadly ovate, rounded, yellow or orange colour below the middle, dark chestnut-brown at apex. Each scale bears two bractlets and three sterile flowers, each flower consisting of a sessile, membraneous, usually two-lobed, calyx. Each calyx bears four short filaments with one-celled anthers or strictly, two filaments divided into two branches, each bearing a half-anther. Anther cells open longitudinally. The pistillate aments are erect or pendulous, solitary; terminal on the two-leaved lateral spur-like branchlets of the year. The pistillate scales are oblong-ovate, three-lobed, pale yellow green often tinged with red, becoming brown at maturity. These scales bear two or three fertile flowers, each flower consisting of a naked ovary. The ovary is compressed, two-celled, and crowned with two slender styles; the ovule is solitary.

Open woodland and heaths, usually on acid soils, from sea level to 830 metres.

Seed – best sown as soon as it is ripe in a light position in a cold frame. Only just cover the seed and place the pot in a sunny position. Spring sown seed should be surface sown in a sunny position in a cold frame. If the germination is poor, raising the temperature by covering the seed with glass can help. When they are large enough to handle, prick the seedlings out into individual pots and grow them on in a cold frame for at least their first winter. Plant them out into their permanent positions in late spring or early summer, after the last expected frosts. If you have sufficient seed, it can be sown in an outdoor seedbed, either as soon as it is ripe or in the early spring – do not cover the spring sown seed. Grow the plants on in the seedbed for 2 years before planting them out into their permanent positions in the winter.

Collection: The leaves are collected in late spring or summer. When collecting the bark, it is important not to ring-bark the tree, in other words not to take off the bark all around the circumference; otherwise the tree will die.

Inner bark – cooked or dried, ground into a powder then used with cereals for making bread etc. Inner bark is generally only seen as a famine food, used when other forms of starch are not available or are in short supply. Sap – raw or cooked. A sweet flavour. Harvested in early spring, before the leaves unfurl, by tapping the trunk. The flow is best on sunny days following a heavy frost. The sap is often concentrated into a sugar by boiling off the water. Between 4 and 7 litres can be drawn off a mature tree in a day and this will not kill the tree so long as the tap hole is filled up afterwards. However, prolonged or heavy tapping will kill the tree. A beer can be fermented from the sap. An old English recipe for the beer is as follows:- “To every Gallon of Birch-water put a quart of Honey, well stirr”d together, then boil it almost an hour with a few Cloves, and a little Limon-peel, keeping it well scumm”d. When it is sufficiently boil”d, and become cold, add to it three or four Spoonfuls of good Ale to make it work… and when the Test begins to settle, bottle it up… it is gentle, and very harmless in operation within the body, and exceedingly sharpens the Appetite, being drunk ante pastum.”. Young leaves – raw or cooked. Young catkins. No more details are given. A tea is made from the leaves and another tea is made from the essential oil in the inner bark.

The oil is astringent, and is mainly employed for its curative effects in skin affections, especially eczema, but is also used for some Internal maladies.

The inner bark is bitter and astringent, and has been used in intermittent fevers.

The vernal sap is diuretic.

Moxa is made from the yellow, fungous excrescences of the wood, which sometimes swell out from the fissures.

Indications: Birch leaves act as an effective remedy for cystitis and other infections of the urinary system as well as removing excess water from the body. Perhaps because of this cleansing diuretic activity, the plant has been used for gout, rheumatism and mild arthritic pain. The bark will ease muscle pain if it is applied externally, putting the fresh, wet internal side of the bark against the skin.

Combinations: For urinary infections it may be used with Bearberry, whilst for rheumatic pain it combines well with Black Willow.

Infusion: pour a cup of boiling water onto l-2 teaspoonfuls of the dried leaves and let infuse for l0 minutes. This should be drunk three times a day.

Other uses of Birch:

The bark is used to make drinking vessels, canoe skins, roofing tiles etc. It is waterproof, durable, tough and resinous. Only the outer bark is removed, this does not kill the tree. It is most easily removed in late spring to early summer. The bark was pressed flat and stored until the following spring. When required for making canoes it would be heated over a fire to make it pliable for shaping to the canoe frame. A pioneer species, it readily invades old fields, cleared or burnt-over land and creates conditions suitable for other woodland trees to become established. Since it is relatively short-lived and intolerant of shade, it is eventually out-competed by these trees. A tar-oil is obtained from the white bark in spring. It has fungicidal properties and is also used as an insect repellent. It makes a good shoe polish. Another report says that an essential oil is obtained from the bark and this, called “Russian Leather” has been used as a perfume. Glue is made from the sap. Cordage can be made from the fibres of the inner bark. This inner bark can also be separated into thin layers and used as a substitute for oiled paper. A decoction of the inner bark is used to preserve cordage, it is rich in tannin. The bark contains up to 16% tannin. A brown dye is obtained from the inner bark. Oil similar to Wintergreen oil (obtained from Gaultheria procumbens) is obtained from the inner bark. It is used medicinally and also makes a refreshing tea. The young branches are very flexible and are used to make whisks, besoms etc. They are also used in thatching and to make wattles. The leaves are a good addition to the compost heap, improving fermentation. A black paint is obtained from the soot of the plant. A high quality charcoal is obtained from the bark. It is used by artists, painters etc. Wood – soft, light, durable. It is used for a wide range of purposes including furniture, tool handles, carving, toys etc. It is a source of charcoal that is used by artists and is also pulped and used for making paper.

Protection, Exorcism, Purification. The traditional broom of the witch is made from birch twigs. Since birch is sacred to Thor, it is best to take the bark after the tree has been “kissed” by Thor that is, hit by lightning. A circular grove of oak trees is among the most magical of sites.