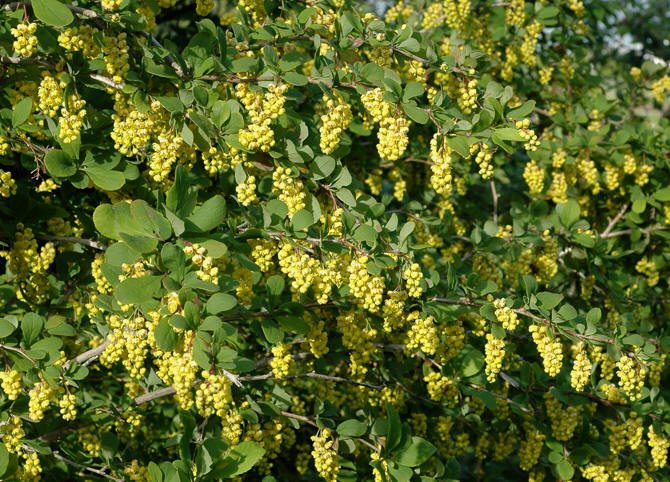 Habitat: Berberis vulgaris grows in the wild in much of Europe and West Asia. It produces large crops of edible berries, rich in vitamin C, but with a sharp acid flavour. Rosehips are more palatable.

The stems are woody, 8 to 10 feet high, upright and branched, smooth, slightly grooved, brittle, with a white pith and covered with an ash-coloured bark.

The leaves of the barren shoots of the year are alternate, 2.5-4cm long, shortly petioled, presenting various gradations from leaves into spines, into which they become transformed in the succeeding year. The primary leaves on the woody shoots are reduced to three-forked spines, with an enlarged base. The secondary leaves are in fascicles from the axil of these spines and are simple, oval, tapering at the base into a short foot-stalk, the margins finely serrate, with the teeth terminating in small spines.

The flowers are small, pale yellow, arranged in pendulous racemes, produced from the fascicles of leaves, towards the ends of the branches. their scent is not altogether agreeable when near, but by no means offensive at a distance. Their stamens show remarkable sensibility when touched springing and taking a position closely applied to the pistil. Insects of various kinds are exceedingly fond of the Barberry flower.

Barberry, berberis vulgaris, prefers a warm moist loamy soil but it is by no means fastidious, succeeding in thin, dry and shallow soils. Prefers a light rich rather dry soil according to another report. Grows well in heavy clay soils. Succeeds in full sun or light shade but requires a moist soil when grown in the shade of trees. Hardy to about -35°c. A very ornamental plant, the barberry was at one time cultivated for its edible fruit, there are several named varieties. ‘Dulcis’ the fruit of which is sweet or slightly sour. ‘Asperma’ is a seedless form that was often used in France to make a jam. An alternate host of ‘black-stem rust’ of wheat so it has been extensively grubbed up from its habitats. Hybridizes freely with other members of this genus, though it usually breeds fairly true to type. Can be pruned back quite severely, it resprouts well from the base.

Seed – best sown as soon as it is ripe in a cold frame, when it should germinate in late winter or early spring. Seed from over-ripe fruit will take longer to germinate, whilst stored seed may require cold stratification and should be sown in a cold frame as early in the year as possible. The seedlings are subject to damping off, so should be kept well ventilated . When the seedlings are large enough to handle, prick them out into individual pots and grow them on in a cold frame. If growth is sufficient, it can be possible to plant them out into their permanent positions in the autumn, but generally it is best to leave them in the cold frame for the winter and plant them out in late spring or early summer of the following year. Germination averages out at about 90%. Cuttings of half-ripe wood, July/August in a frame. Cuttings of mature wood of the current season’s growth, preferably with a heel, October/November in a frame. Suckers, removed in late autumn/early winter and planted out in situ or potted up and planted out in late spring.

In Europe for many centuries the berries were used for culinary purposes in ways comparable to how citrus peel might be used. Today in Europe they are very little used. The country in which they are used the most frequently today is Iran. In Iran the berries are common in rice pilafs and as a flavouring for poultry meat.

Berberis microphylla or the similar B. heterophylla (both known as Calafate), and B. darwinii (Michay) are two species found in Patagonia in Argentina and Chile. Their edible purple fruits are used for jams and infusions; anyone who tries a berry is said to be certain to return to Patagonia.

Indications : Barberry is one of the best remedies for correcting liver function and promoting the flow of bile. It is indicated when there is an inflammation of the gall-bladder or in the presence of gallstones. When jaundice occurs due to a congested state of the liver, Barberry is also indicated. As a bitter tonic with mild laxative effects,  it is used with weak or debilitated people to strengthen and cleanse the system. An interesting action is its ability to reduce an enlarged spleen. It acts against malaria and is also effective in the treatment of protozoal infection due to Leishmania spp. Used as a douche in leucorrhea.

Priest & Priest  tell us that it is a “stimulating tonichepatic: influences the mucosa generally,  removing mucoid accumulations and controlling excess secretion. Improves appetite,  digestion and assimilation. Indicated for `gouty’ constitutions” They give the following specific indications : Biliary catarrh with constipation and jaundice. Gastritis,  biliousness,  debility during convalescence,  ulcerative stomatitis,  eczema of the hands.

Felter  considered it “much like Hydrastis and could be employed for many of the uses of that scarce and high-priced drug. Used for chronic catarrhal ophthalmias as a decoction,  also in aphtousulcers. It is tonic,  and if pushed purgative. It is of value in non-obstructive jaundice and in gastric and intestinal dyspepsias. In renal catarrh,   occasioned by the presence of calculi, small doses may be given when there is burning and soreness and excess mucousin the urinary tract.”

In gall-bladder diseases it combines well with Fringe tree Bark and Black Root.

Decoction: put 1 teaspoonful of the bark into a cup of cold water and bring to the boil. Leave for 10-15 minutes. This should be drunk three times a day.

No magical uses found but if you know of one please let us know!