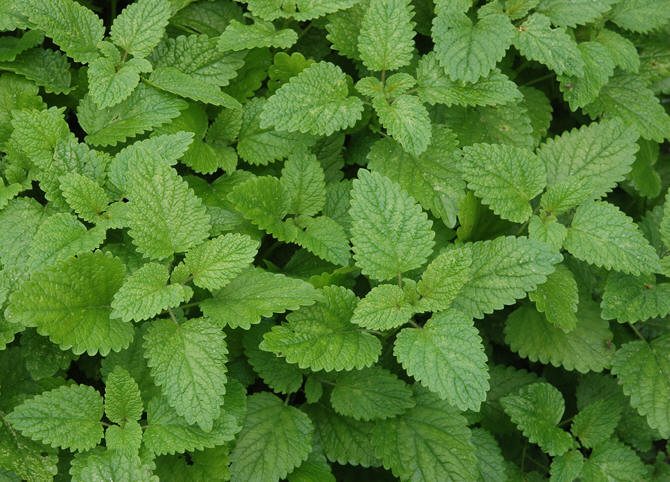 Can cause irritation in high concentrates. Avoid during pregnancy. Care if sensitive skin.

A native of South Europe, especially in mountainous situations, but is naturalized in the south of England, and was introduced into our gardens at a very early period. Waste places and derelict land near human habitations.

A very easily grown plant, it succeeds in any well-drained soil in a sunny sheltered position. It prefers a light rich moist soil, a warm position and partial shade. Once established, this is a drought tolerant species. it is a useful plant to try in difficult dry places, usually succeeding in the dustiest of soils once it is established. Lemon balm is often grown in the herb garden, and sometimes also commercially, there are some named varieties.. Plants can often self-sow so freely as to become a menace. If the plants are cut back hard after flowering, they will produce a fresh flush of leaves.. Members of this genus are rarely if ever troubled by browsing deer or rabbits. A good bee plant. A good companion plant, especially for brassicas.

Lemon flavour is very pleasant although it is usually only used in teas.

Leaves – raw or cooked. A pleasant lemon-like aroma and flavour, they are used mainly as a flavouring in salads and cooked foods. A lemon-flavoured tea can be made from the fresh or dried leaves. A bunch of the leaves can be added to china tea, much improving the flavour, the leaves are also added to fruit cups etc. They are used as a flavouring in various alcoholic beverages including Chartreuse and Benedictine.

Balm is an excellent carminative herb that relieves spasms in the digestive tract and is used in flatulent dyspepsia. Because of its mild anti-depressive properties,  it is primarily indicated where there is dyspepsia associated with anxiety or depression,  as the gently sedative oils relieve tension and stress reactions,   thus acting to lighten depression. The volatile oil appears to act on the interface between the digestive tract and nervous system. It has been described by some herbalist’s as being trophorestorative to the nervous system,  similar in some ways to Oats. It may be used in migraine that is associated with tension,  neuralgia,  anxiety induced palpitations,  insomnia.   Balm has a tonic effect on the heart and circulatory system causing mild vaso-dilation of the peripheral vessels,  thus acting to lower blood pressure. It can be used in feverish conditions such as influenza. Hot water extracts have anti-viral properties,  possibly due in part to rosmarinic acid and other polyphenolics. A lotion based extract maybe used for skin lesions of Herpes simplex,  the anti-viral activity having been confirmed both laboratory and clinical trial. Its hormone regulating effects are well documented in the laboratory. Freeze-dried aqueous extracts inhibit many of the effects of thyroid stimulating hormone (TSH) on the thyroid gland by interfering with the binding of TSH to plasma membranes and by inhibiting the enzyme iodothyronine de-iodinase in vitro. It also inhibits the receptor binding and biological activity of immunoglobulins in the blood of patients with Graves disease,  a condition which results in hyperthyroidism.

With digestive troubles it may be combined with Hops, Chamomile or Meadowsweet. For stress and tension it can be used with Lavender and Lime Blossom.
Preparations & Dosage of Balm:

Infusion:  pour a cup of boiling water onto 2-3 teaspoonfuls of the dried herb or 4-6 fresh leaves and leave to infuse for 10-15 minutes,  well covered until drunk. A cup of this tea should be taken in the morning and the evening,  or when needed.

Tincture: take 2-6 ml of the tincture three times a day.

Other uses of Lemon Balm:

Love. Success. Healing, especially for those with mental or nervous disorders. Use in love charms and spells to attract a partner. Opens one to the divine love of the Goddess. Gives energy to make one more desirable to the opposite sex.

The growing plant is said to repel flies and ants. It is also rubbed on the skin as a repellent, though the essential oil would be more effective here. An essential oil is obtained from the plant (the exact part is not specified, it is probably the entire plant and especially the flowering stems). It is used medicinally. The whole plant is very pleasantly aromatic, the aroma lasting for a long time after the plant has been harvested. It is therefore a very useful ingredient in pot-pourri.