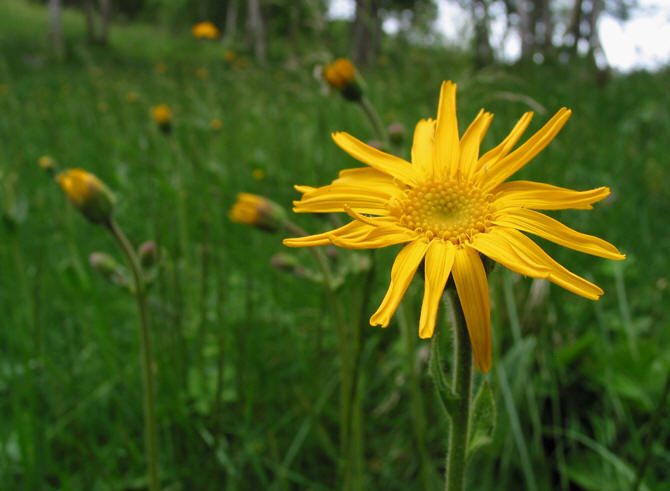 Arnica montana is a PERENNIAL herb growing to 0.3 m (1ft) by 0.2 m (0ft 8in).
It is hardy to zone 6 and is not frost tender. It is in flower in July. The flowers are hermaphrodite (have both male and female organs) and are pollinated by Bees, flies, lepidoptera, self.The plant is self-fertile.

Suitable for: light (sandy), medium (loamy) and heavy (clay) soils, prefers well-drained soil and can grow in nutritionally poor soil. Suitable pH: acid, neutral and basic (alkaline) soils and can grow in very acid soils.
It can grow in semi-shade (light woodland) or no shade. It prefers moist soil.

Seed – Arnica is best sown as soon as it is ripe in pots outdoors. Sow stored seed in early spring in a cold frame. A period of cold stratification is helpful. The fresh seed can germinate in 3 – 4 weeks at 13°C according to one report, though it can be slow, difficult and erratic and take 2 years to germinate. Prick out the seedlings into individual pots when they are large enough to handle and plant them out into their permanent positions in the following spring. Division in spring.

The whole plant is toxic and should only be used for external applications to unbroken skin. Alcoholic extracts of Arnica can cause toxic effects on the heart and raise blood pressure.

Collection: The flowers are collected between June and August.

Indications: Whilst this herb should not be taken internally as it is potentially toxic, it provides us with one of the best remedies for external local healing and may be considered a specific when it comes to the treatment of bruises and sprains. The homeopathic preparation is entirely safe to take internally, especially when taken according to homeopathic directions. The herb itself, used externally, will help in the relief of rheumatic pain, the pain and inflammation of phlebitis and similar conditions. It may in fact be used wherever there is pain or inflammation on the skin, as long as the skin is not broken. Arnica has been shown to be an immuno-stimulant, as both the sesquiterpene lactone helenalin and the polysaccharide fraction stimulate phagocytosis. Sesquiterpene lactones are known to have anti-inflammatory activity and their biological effects appear to be mediated through immunological processes. As helenalin is one of the most active, this might help account for the use of Arnica for pain and inflammation.

Ellingwood considered it specific for “bruised, sore, lacerated and contused muscular structures.” In addition he recommends it for the following pathologies: muscular soreness, pain, soreness of the breasts, severe injury, old sores, and abscesses.

Combinations: For a lotion it may be combined with distilled Witch Hazel.

You can prepare your own tincture of this herb as follows: pour 1/2 litre (one pint) of 70% alcohol over 50 grams (two ounces) of freshly picked flowers. Seal it tightly in a clear glass container and let it stand for at least a week in the sun or in a warm place. Filter it and it is ready for use. To store it, put the tincture in a sealed container and keep it out of direct sunlight. Remember this is for external use only!!!!