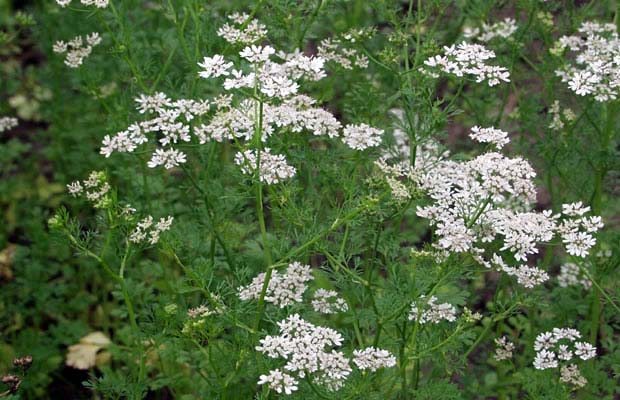 Habitat: This is a flowering plant in the native to the eastern Mediterranean region and Southwest Asia. Its flavour has similarities with star anise and fennel.

Anise is a herbaceous annual plant growing to 1 m (3 ft) or more tall. The leaves at the base of the plant are simple, 1-5 cm (⅜-2 in.) long and shallowly lobed, while leaves higher on the stems are feathery pinnate, divided into numerous leaves. The flowers are white, approximately 3 mm in (⅛ in.) in diameter, produced in dense umbels. The fruit is an oblong dry schizocarp, 3–6 mm (⅛-¼ in.) long, usually called “aniseed”.

Anise is a food plant for the larvae of some Lepidoptera species (butterflies and moths), including the lime-speck pug and wormwood pug.

Anise which is an annual, plant grow best in light, fertile, well drained soil. The seeds should be planted as soon as the ground warms up in spring. Because the plants have a taproot, they do not transplant well after being established, so they should be started either in their final location or transplanted while the seedlings are still small.

Widely used in cooking as a spice for flavouring cakes and soups. It can also be used to make refreshing cordials.

Young leaves – raw or cooked. The leaves have a sweet aniseed flavour, they are very refreshing to chew and are also nice as a flavouring in salads, puddings, soups, stews etc. When adding to cooked dishes, only add the leaves for the last few minutes of the cooking or the flavour will be lost. The aromatic seed is eaten raw or used as a flavouring in raw or cooked foods such as soups, pies, bread and cakes. A distinctive sweet liquorice flavour, its use improves the body’s ability to digest food. The seed is harvested by cutting the whole plant when the seed is ripe. The plants are then kept in a warm, dry position for a week and then threshed to remove the seeds. Store the seeds in the dark in an airtight jar. An essential oil from the seed is used as a food flavouring in sweets (especially aniseed balls) ice cream, chewing gum, pickles etc. It is also often used to flavour alcoholic drinks such as pernod, ouzo and anisette. The leaves and the seeds can be brewed into a sweet liquorice-like tea.

Indications: The volatile oil in Aniseed provides the basis for its internal use to ease griping, intestinal colic and flatulence. It also has an expectorant and anti-spasmodic action and maybe used in bronchitis, in tracheitis where there is persistent irritable coughing, and in whooping cough. Externally, the oil maybe used in an ointment base for the treatment of scabies. The oil by itself will help in the control of lice. Aniseed has been demonstrated to increase mucociliary transport and so supporting its use as an expectorant. It has mild estrogenic effects, thought to be due to the presence of dianethole and photoanethole, which explains the use of this plant in folk medicine to increase milk secretion, facilitate birth and increase libido.

Felter & LLoyd considered it a “stimulant and carminative; used in cases of < b>flatulence, flatulent colic of infants, and to remove nausea. Sometimes added to other medicines to improve their flavour, correct griping and other disagreeable effects…”

Combinations: For flatulent colic mix Aniseed with equal amounts of Fennel and Caraway. For bronchitis it combines well with Coltsfoot, Horehound and Lobelia. For whooping cough with Mouse Ear and Chamomile.

Infusion: the seeds should be gently crushed just before use to release the volatile oils. Pour one cup of boiling water over 1-2 teaspoonfuls of the seeds and let it stand covered for 5 to 10 minutes. Take one cup three times daily. To treat flatulence, the tea should be drunk slowly before meals.

Oil: one drop of the oil may be taken internally by mixing it into half a teaspoonful of honey.

An essential oil is obtained from the seed, used in perfumery, tooth pastes, medicinally and as a food flavouring. The powdered seed can be used as a dentrifice and mouthwash. The plant is an ingredient of pot-pourri. The plant can be used as an insect repellent but it is also said to attract mice. If aniseed oil is liberally smeared around live-traps it can attract mice and other rodents into them. The plants seem to be immune to the predations of slugs and snails and can help to protect neighbouring plants. A spray made by boiling of one part coriander leaves and one part anise seeds in two parts of water is very effective against red spider mites and woolly aphids.

Protection. Purification. Youth. Deals with inner, personal issues related to lack of fulfillment  Helps one to become more open to happiness and enjoy company of others. Put in dream pillows to protect from nightmares. Brings protection when traveling in the astral. Include anise in hand-fasting and wedding cakes.