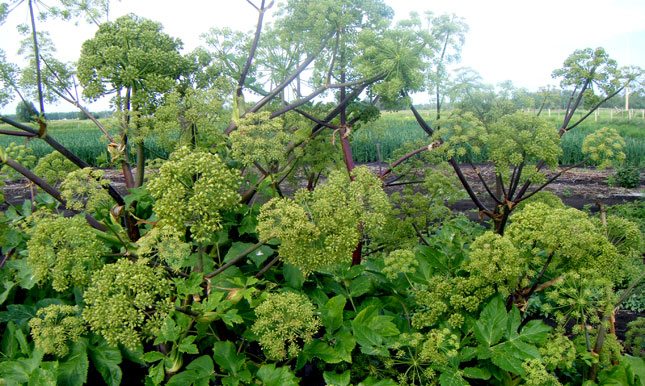 All members of this genus contain furocoumarins, which increase skin sensitivity to sunlight and may cause dermatitis.

Angelica has been widely used the world over as a medicinal herb. It is a useful expectorant for coughs, bronchitis and pleurisy, especially when they are accompanied by fever, colds or the flu. The leaf used as a compress is very useful in chest infections. It contains high levels of essential oil which is a carminative which is why it is widely used for relieving intestinal colic and flatulence. As a digestive agent it stimulates the appetite and can be very useful in the treatment of anorexia nervosa. It has been shown to ease rheumatic inflammations. In cystitis it acts as a urinary antiseptic.

The roots of the Common Angelica are long and spindle-shaped, thick and fleshy – large specimens weighing sometimes as much as three pounds – and are beset with many long, descending rootlets. The stems are stout fluted, 120cm-180cm high and hollow. The foliage is bold and pleasing, the leaves are on long stout, hollow footstalks, often 1 meter in length, reddish purple at the much dilated, clasping bases; the blades, of a bright green colour, are much cut into, being composed of numerous small leaflets, divided into three principal groups, each of which is again subdivided into three lesser groups. The edges of the leaflets are finely toothed or serrated. The flowers, small and numerous, yellowish or greenish in colour, are grouped into large, globular umbels. They blossom in July and are succeeded by pale yellow, oblong fruits, 2mm to 6mm in length when ripe, with membranous edges, flattened on one side and convex on the other, which bears three prominent ribs. Both the odour and taste of the fruits are pleasantly aromatic.

Our native form, A. sylvestris (Linn.), is hairy in stalk and stem to a degree which makes a well-marked difference. Its flowers differ, also, in being white, tinged with purple. The stem is purple and furrowed. This species is said to yield a good, yellow dye.

Angelica is unique amongst the Umbelliferae for its pervading aromatic odour, a pleasant perfume, entirely differing from Fennel, Parsley, Anise, Caraway or Chervil. One old writer compares it to Musk, others liken it to Juniper. Even the roots are fragrant, and form one of the principal aromatics of European growth- the other parts of the plant have the same flavour, but their active principles are considered more perishable.

The fresh root has a yellowish-grey epidermis, and yields when bruised a honey coloured juice, having all the aromatic properties of the plant. If an incision is made in the bark of the stems and the crown of the root at the commencement of spring, this resinous gum will exude. It has a special aromatic flavour of musk benzoin, for either of which it can be substituted.

The dried root, as it appears in commerce, is greyish brown and much wrinkled externally, whitish and spongy within and breaks with a starchy fracture, exhibiting shining, resinous spots. The odour is strong and fragrant, and the taste at first sweetish, afterwards warm, aromatic, bitterish and somewhat musky. These properties are extracted by alcohol and less perfectly by water.

Cultivate in ordinary deep, moist loam, in a shady position, as the plant thrives best in a damp soil and loves to grow near running water. Although the natural habitat is in damp soil and in open quarters, yet it can withstand adverse environment wonderfully well, and even endure severe winter frost without harm. Seedlings will even successfully develop and flower under trees, whose shelter creates an area of summer dryness in the surface soil, but, of course, though such conditions may be allowable when Angelica is grown merely as an ornamental plant, it must be given the best treatment as regards suitable soil and situation when grown for its use commercially. Insects and garden pests do not attack the plant with much avidity: its worst enemy is a small two winged fly, of which the maggots are leafminers, resembling those of the celery plant and of the spinach leaf.

Should not be attempted otherwise than by the sowing of ripe, fresh seed, though division of old roots is sometimes recommended, and also propagation by offshoots, which are thrown out by a two-year old plant when cut down in June for the sake of the stems, and which transplanted to 60cm or more apart, will provide a quick method of propagation, considered inferior, however, to that of raising by seed. Since the germinating capacity of the seeds rapidly deteriorates, they should be sown as soon as ripe in August or early September. If kept till March, especially if stored in paper packets, their vitality is likely to be seriously impaired. In the autumn, the seeds may be sown where the plants are to remain, or preferably in a nursery bed, which as a rule will not need protection during the winter. A very slight covering of earth is best. Young seedlings, but not the old plants, are amenable to transplantation. The seedlings should be transplanted when still small, for their first summer’s growth, to a distance of about 45 cm apart. In the autumn they can be removed to permanent quarters, the plants being then set 1 metre apart.

By some botanists, this species of Angelica is believed to be a native of Syria from whence it has spread to many cool European climates, where it has become naturalized. It is occasionally found native in cold and moist places in Scotland, but is more abundant in countries further north, as in Lapland and Iceland. It is supposed to have come to this country from northern latitudes about 1568, There are about thirty varieties of Angelica, but this one is the only one officially employed in medicine.

Parkinson, in his Paradise in Sole, 1629, puts Angelica in the forefront of all medicinal plants, and it holds almost as high a place among village herbalists to-day, though it is not the native species of Angelica that is of such value medicinally and commercially. An allied form, found wild in most places in the northern parts of Europe. This large variety, Angelica Archangelica (Linn.), also known as Archangelica officinalis, is grown abundantly near London in moist fields, for the use of its candied stems. It is largely cultivated for medicinal purposes in Thuringia, and the roots are also imported from Spain.

The root is collected in the autumn of its first year. If it is very thick it can be cut longitudinally to speed its drying. The leaves should be collected in June.

Angelica is used frequently as a flavouring; in liqueurs such as Chartreuse and Benedictine, in gin and vermouth; the leaves as a garnish or in salads; and the candied stalks in cakes and pudding.

Though the tender leaflets of the blades of the leaves have sometimes been recommended as a substitute for spinach, they are too bitter for the general taste, but the blanched mid-ribs of the leaf, boiled and used as celery, are delicious, and Icelanders eat both the stem and the roots raw, with butter. The taste of the juicy raw stems is at first sweetish and slightly bitter in the mouth and then gives a feeling of glowing warmth. In Lapland, the inhabitants regard the stalks of Angelica as a great delicacy. These are gathered before flowering, the leaves being stripped off and the peel removed, the remainder is eaten with much relish. The Finns eat the young stems baked in hot ashes, and an infusion of the dried herb is drunk either hot or cold: the flavour of the decoction is rather bitter, the colour is a pale greenish grey and the odour greatly resembles China Tea. It was formerly a practice in this country to put a portion of the fresh herb into the pot in which fish is boiled.

The Norwegians make bread of the roots.

Indications: This herb is a useful expectorant for coughs, bronchitis and pleurisy, especially when they are accompanied by fever, colds or influenza. The leaf can be used as a compress in inflammations of the chest. It content of carminative essential oil explains its use easing intestinal colic and flatulence. As a digestive agent it stimulates appetite and may be used in anorexia nervosa. It has been shown to help ease rheumatic inflammations. In cystitis it acts as a urinary antiseptic.

Combinations: For bronchial problems it combines well with Coltsfoot and White Horehound; for indigestion, flatulence and loss of appetite with Chamomile. In Musculo-skeletal problems it may be used with herbs such as Black Cohosh, Willow Bark and Bogbean.

Decoction: put a teaspoonful of the cut root in a cup of water, bring it to the boil and simmer for two minutes. Take it off the heat and let it stand for 15 minutes. Take one cup three times a day.

Tincture: Take 2-5 ml of the tincture three times a day.

An essential oil from the root and seeds is used in perfumery, medicinally and as a food flavouring. The oil from the seeds has a musk-like aroma and is often used to flavour liqueurs. The dried root contains 0.35% essential oil, the seed about 1.3%. Yields of the essential oil vary according to location, plants growing at higher altitudes have higher yields with a better aroma.

Exorcism, Protection, Healing, Visions. Use in all protection and exorcism incenses. Angelica protects in two ways: it creates a barrier against negative energy and fills you with good, radiant energy. Removes curses, hexes, or spells that have been cast against you. Enhances the aura. Gives a joyful outlook on life.

AMERICAN ANGELICA or Masterwort (A. atropurpurea, Linn.), also used in herbal medicine in North America, grows throughout the eastern United States. The root has a strong odour and a warm aromatic taste. The juice of the fresh root is acrid and said to be poisonous, but the acridity is dissipated by drying.

The root, though lighter and less branched, is similar in appearance to that of A. Archangelica, with nearly allied constituents and properties, and the medicinal virtues of the whole plant are similar, so that it has been employed as a substitute, but it is inferior to the European Angelica, being less aromatic.

The Angelica Tree of America (Xanthoxylum Americanum, Mill), the Prickly Ash, as it is more generally named, is not allied to the umbelliferous Angelicas. Its berries and bark are employed to prepare a tonic, and it is used in the treatment of rheumatism and skin diseases.

Angelica is a genus of about 60 species of tall biennial and perennial herbs in the family Apiaceae ,

Citations from the Medline database for the genus Angelica

The physiological actions of tang-kuei and cnidium.