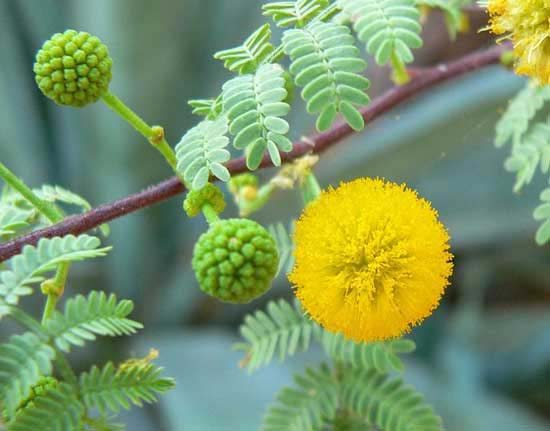 There are many genus of this family of plants but they do share many common characteristics and uses.

DESCRIPTION
Medicinal Parts: The medicinal parts are the bark, the gum and the fruit of the plant.
Flower and Fruit: The flowers are yellow and sweetly scented. Two to 6 inflorescence peduncles with capitula-like inflorescences grow from the axils of the upper leaflets. The flowers have short calyces with numerous overlapping sepals. The completely fused petals are almost twice as large as the sepals. The fruit is a 12 to 16 cm long and 1.5 cm wide pod. The pod is straight or lightly curved, flat to convex, and pinched in to create segments. It is matte-black to dark-red. The seeds are 7 x 6 mm and the same color as the pod.
Leaves, Stem and Root: Acacia arabica is a 6 m high tree with a compact, round to flat crown. Older branches are bare, younger ones measuring 15 to 20 mm in diameter are covered in hairy down. The bark is black and fissured; the colouring in the fissure changes to red-brown. There are stipule thorns at the nodes. The leaflets of the double-pinnate leaves are in 3 to 12 pairs on the bare to downy petiole, which is covered with glands The leaflets are oblong, blunt, and bare or thinly ciliate.
Habitat: The plant is indigenous to the Nile area, Ethiopia, East Africa, Angola, Mozambique, South Africa, Arabia, Iran, Afghanistan and India.
Production: The bark is collected from plants that are at least 7 years old and then left to mature for a year.
Not to be Confused With: The bark of the Australian species Acacia decurrens, which is commercially available under the same name.

ACTIONS AND PHARMACOLOGY of Acacias

Please note that it is the Acacia bark the scientific name for Acacia that we are discussing here is Acacia arabica.

COMPOUNDS
Tannins
EFFECTS
The drug has an astringent effect.
Uses:
Culinary:
Gum Arabic Powder is widely used in the food industry, as an emulsifier, thickener, flavour encapsulator and thickening agent. It is used primarily in the confectionary industry to inhibit sugar crystallization, as a thickener, stabilizer and flavour emulsifier.
Medicinal: This variety is not use medicinally in western herbalism. Another member of it’s genus Acacia catehu is used.

INDICATIONS AND USAGE of acacias

Unproven Uses: The drug is used as a decoction for gum disease and inflammations of the mucous membrane of the mouth and throat (rarely used today).
Indian Medicine: Acacia is used as a decoction in the treatment of diarrhoea and vaginal secretions, and as an enema for haemorrhoids.
PRECAUTIONS AND ADVERSE REACTIONS
Large doses taken internally can lead to indigestion and constipation.
Other uses:

LITERATURE
Berger F, Handbuch der Drogenkunde, W Maudrich Verlag Wien 1964.
Hansel R, Keller K. Rimpler H, Schneider G (Hrsg.), Hagers Handbuch der Pharmazeutischen Praxis, 5. Aufl., Bde 4-6 (Drogen), Springer Verlag Berlin, Heidelberg, New York, 1992-1994.
Trease GE, Evans WC (Eds.), Pharmacognosy, 12th Ed., Bailliere Tindall 1983.
Acacia Concuine are used by Indian women in the same way as the soapnut for washing the head; and the leaves of the same tree are employed in cookery for their acidity.
Acacia Niopo seeds used by some Amazon tribes as part of snuff.
Acacia verek this variety comes from the Sudan and upper Egypt and is known locally as Hachah
Acacia senegal
Synonyms Indian Gum; Gum Acacia; Gum Arabic.
Biological Source According to the USP, acacia is the dried gummy exudation from the stems and branches of Acacia senegal (L.) Willd; family; Leguminoseae, or other African species of Acacia.
It is also found in the stems and branches of Acacia arabica, Willd. Geographial Source The plant is extensively found in India, Arabia, Sudan and Kordofan (North- East Africa), Sri Lanka, Morocco, and Senegal (West Africa). Sudan is the major producer of this gum and caters for about 85% of the world supply.
Cultivation and Collection Acacia is recovered from wild as well as duly cultivated plants in the following manner, such as:
(a) From Wild Plants: The Gum after collection is freed from small bits of bark and other foreign organic matter, dried in the sun directly that helps in the bleaching of the natural gum to a certain extent, and
(b) From Cultivated Plants: Usually, transverse incisions are inflicted on the bark which is subsequently peeled both above and below the incision to a distance 2-3 feet in length and 2-3 inches in breadth. Upon oxidation, the gum gets solidified in the form small translucent beads, sometimes referred to as  ‘tears’. Tears of gum normally become apparent in 2-3 weeks, which is subsequently hand picked , bleached in the sun, garbled, graded and packed.
Description
Colour: Tears are usually white, pale-yellow and sometimes creamish-brown to red in colour. The power has an off-white, pale-yellow or light-brown in appearance.
Odour: Odourless (There is a close relationship between colour and flavour due to the
presence of tannins).
Taste: Bland and mucilaginous.
Shape & Size: Tears are mostly spheroidal or ovoid in shape and having a diameter of about 2.5-3.0 cm.
Appearance: Tears are invariably opaque either due to the presence of cracks or fissures produced on the outer surface during the process or ripening. The fracture is usually very brittle in nature and the exposed surface appears to be glossy.
A bit of chemistry:

Chemical Constituents Acacia was originally thought to be composed only of  four chemical constituents, namely : (–) arabinose; (+) – galactose; (–)–rhamnose and (+) glucuronic acid.
On subjecting the gum acacia to hydrolysis with 0.01 N H2SO4 helps in removing the combined product of (–) – arabinose and (+) – galactose, whereas the residue consists of the product (+) – galactose and (+) – glucuronic acid. These two products are formed in the ratio of 3:1.
It also contains a peroxidase enzyme.
Chemical Tests
1. Lead Acetate Test: An aqueous solution of acacia when treated with lead-acetate solution it yields a heavy white precipitate.
2. Borax Test: An aqueous solution of acacia affords a stiff translucent mass on treatment with borax.
3. Blue Colouration due to Enzyme: When the aqueous solution of acacia is treated with benzidine in alcohol together with a few drops of hydrogen peroxide (H2O2), it gives rise to a distinct–blue colour indicating the presence of enzyme.
4. Reducing Sugars Test: Hydrolysis of an aqueous solution of acacia with dilute HCl yields reducing sugars whose presence are ascertained by boiling with Fehling’s solution to give a brick-red precipitate of cuprous oxide.
5. Specific Test: A 10% aqueous solution of acacia fails to produce any precipitate with dilute solution of lead acetate (a clear distinction from Agar and Tragacanth); it does not give any colour change with Iodine solution (a marked distinction from starch and dextrin); and it never produces a bluish-black colour with FeCl3 solution (an apparent distinction from tannins).
Uses
1. The mucilage of acacia is employed as a demulcent.
2. It is used extensively as a vital pharmaceutical aid for emulsification and to serve as a thickening agent.
3. It finds its enormous application as a binding agent for tablets e.g., cough lozenges.
4. It is used in the process of ‘granulation’ for the manufacture of tablets. It is considered to be the gum of choice by virtue of the fact that it is quite compatible with other plant hydrocolloids as well as starches, carbohydrates and proteins.
5. It is used in conjuction with gelatine to form conservates for microencapsulation of drugs.
6. It is employed as colloidal stabilizer.
7. It is used extensively in making of candy and other food products.
8. It is skilfully used in the manufacture of spray – dried ‘fixed’ flavours – stable, powdered flavours employed in packaged dry-mix products (puddings, desserts, cake mixes) where flavour stability and long shelf-life are important.