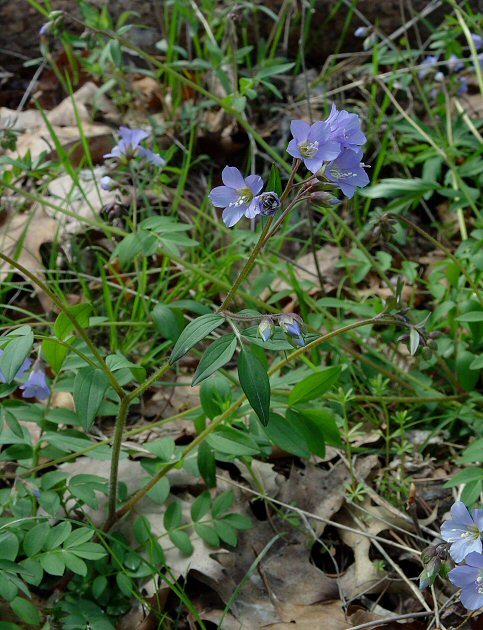 Medicinal Parts: The medicinal part is the dried root.
Flower and Fruit: The hanging blue flowers are in loose terminal, glandular-haired panicles.
Leaves, Stem and Root: The plant grows to about 25 cm. It has creeping roots and a thin rhizome, which produces numerous stems and numerous pale, thin, glabrous and brittle roots. The glabrous stems are heavily branched and bear alternate or opposite, pinnatifid leaves with 6 or 7 pairs of leaflets.
Production: Abscess Root is the rhizome of Polemonium reptans.
Not to be Confused With: The plant is known as False Jacob’s Ladder because it has an astringent action similar to true Jacob’s Ladder
Habitat: The plant is found in the U.S. Rich woods, damp ground and along shady river banks.

Abscess root prefers a moist well-drained fertile soil in sun or semi-shade. Plants are best grown in a soil approaching that of a moraine and they must not be allowed to dry out in the summer. Plants are hardy to about -20°c. A number of named varieties have been selected for their ornamental value. Plants have a creeping root and can multiply very quickly. They can also self-sow to the point of nuisance. The plants have a smell that attracts cats. The cats roll in the plants with evident pleasure and can cause considerable damage to young plants and ones that have recently been moved.

Seed – sow Abscess Root in spring in a cold frame. When they are large enough to handle, prick the seedlings out into individual pots and grow them on in the greenhouse for their first winter. Plant them out into their permanent positions in late spring or early summer, after the last expected frosts. Division in early spring or early autumn. Larger divisions can be planted out direct into their permanent positions. We have found that it is better to pot up the smaller divisions and grow them on in light shade in a cold frame until they are well established before planting them out in late spring or early summer.

This is not usually used as a culinary herb as it is rather bitter.

Abscess root has astringent, diaphoretic and expectorant effects. The drug has been recommended for use in febrile and inflammatory eases, all scrofulous diseases, in bowel complaints requiring an astringent, for the bites of venomous snakes and insects, for bronchitis and  laryngitis and whenever an alterative is required. It is reported to have cured consumption; an infusion of the root in wine glassful doses is useful in coughs, colds and all lung complaints, producing copious perspiration.

Is often used as a hair rinse in patients suffering from scrofulous skin conditions, psoriasis.

None known but if you know of any please let us know!

ACTIONS AND PHARMACOLOGY
COMPOUNDS
Triterpene saponins
INDICATIONS AND USAGE
Unproven Uses: The drug is used for febrile and inflammatory disorders.
PRECAUTIONS AND ADVERSE REACTIONS
No health hazards or side effects are known in conjunction with the proper administration of designated therapeutic dosages.
DOSAGE
Mode of Administration: It is ground as a drug for infusion.
LITERATURE
Hegnauer R, Chemotaxonomie der Pflanzen, Bde 1-11,
Birkhauser Verlag Basel, Boston, Berlin 1962-1997.